What is the significance of the upcoming US total eclipse? 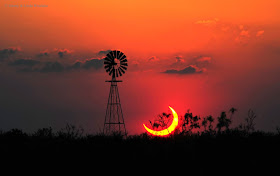 On 21 August a total eclipse of the sun will sweep across the entirety of the USA. Does this event have any significance - aside from the astronomical angle?

Eclipses seem to have had a bad reputation in ancient times, being regarded as portents of disaster. Assuming that the world has long been in the grip of a spiritual war between god and evil, angelic and demonic powers - why might this be?

My interpretation is that evil powers are the ones who most like to plan and strategise, and use symbolism. This (I guess) is because they tend to ignore free agency - they try to overwhelm people's ability to perceive clearly, understand real significance, make good decisions. An eclipse is just the kind of thing they would look-forward to.

The sun is good, and a symbol of good (indeed of Christ) - so solar influence being blocked (even temporarily) is symbolically 'a bad thing'. There is also a tradition of evil, or at least ambivalent, symbolism of the moon - which is doing the blocking... however, I interpret this as a deceptive distortion of reality, and that the moon is also good, but in a different and complementary way from the sun.

And the eclipse is also a hazard for evil, because it is potentially a great big primary experience that may induce people to think about ultimates and realities... always something that favours Good.

So, the demons and their servants will - I guess - be very keen that people experience the eclipse only at second hand - via the mass media; and that the experience will be undermined by socialising (e.g. an 'eclipse party'), social media ('nuff said), and technology (if someone is trying to get a good photograph of the eclipse, they will not be having a spiritual experience).

So, maybe what we ought to do is to experience the solar eclipse (whether the totality or more likely some degree of partial eclipse) in as simple, direct, quiet, thoughtful and solitary fashion as may be contrived...