John Fitzgerald and I have compiled a book from our posts on the Albion Awakening blog and Bruce Charlton has written an introduction for it. 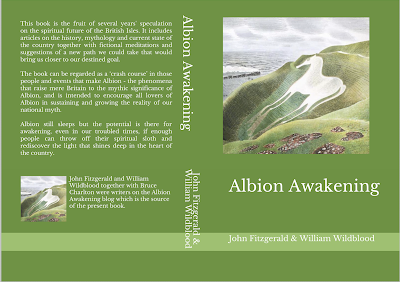 The paperback version can be found here.

for the UK market

and here for the American market.

The back cover blurb read as follows:

"Now that Britain has left the EU it's a good time to ask ourselves where we should be going from here. Albion Awakening is the fruit of several years’ speculation on the spiritual future of the British Isles. It includes articles on the history, mythology and current state of the country together with fictional meditations and suggestions of a new path we could take that would bring us closer to our destined goal.

The book can be regarded as a ‘crash course’ in those people and events that make Albion - the phenomena that raise mere Britain to the mythic significance of Albion. It is intended to encourage all lovers of Albion in sustaining and growing the reality of our national myth.

Albion still sleeps but the potential is there for awakening, even in our troubled times, if enough people can throw off their spiritual sloth and rediscover the light that shines deep in the heart of the country."

Please feel free to leave a review if you like it!

Posted by William Wildblood at 04:57 2 comments: