The Inklings - Heralds of the Coming Christian Renaissance 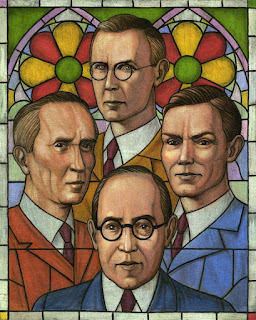 I once claimed, in response to a post on Bruce Charlton's Notions, that J.R.R. Tolkien and C.S. Lewis could be viewed as twentieth-century incarnations of the 'two witnesses' referred to in the Book of Revelation. That was silly and hyperbolic, yet my sense remains that the Inklings in general, and these two in particular, were sent by God to carry out a great creative work which would echo and resound and have long-term repercussions for good in the world.

At first sight this might appear questionable. The Lord of the Rings and the Narnia books were published in the 1950s. Since then, the materialist worldview, ably assisted by social and economic liberalism, New Age 'spirituality' and post-modern vacuity, has made great strides in hollowing out the deposit of faith and culture that the West still possessed, albeit in diminished fashion, immediately after the Second World War (when Lewis's That Hideous Strength and Charles Williams' All Hallows Eve were published).

'What use were Lewis and Tolkien then?' a cynic might quibble. One could equally turn the question around, however, and ask, 'But what if they never existed? What if they never wrote a word? What if their words went unheard? How much more precipitous might the decline have been?'

It's staggering when you think about it, the amount of people - young people in the main - who, without Lewis and Tolkien, would have been deprived of such a fine and noble imaginative vision, such a potent alternative to the drab secularism masquerading as freedom which sets, it seems, so much of the world's agenda today.

I say 'seems', because its power base is dissolving as I write. Its hold over the imagination is weakening. Liberal humanism has become shouty and shrill. It no longer motivates, unshackles or inspires. Its future appears limited, and the Inklings, I feel, have played a significant role in challenging and undermining its flat, one-dimensional, increasingly joyless manner of experiencing the world. But that's just the start. The Inklings story will run and run. Because what their writings point towards is nothing less, to my mind, than the great Christian renaissance to come - the 'Age of the Holy Spirit' prophesied by Joachim of Flore in the twelfth century and Nicholas Berdyaev in the twentieth.

The reformers of the Second Vatican Council, to take the Catholic perspective I know best, sensed something of this approaching change, I think. They realised that what had become a sometimes rather rules-obsessed Tridentine Church might struggle to inspire hearts and minds in the modern era. Their (or their interpreters) mistake, however, was to throw the baby out with the bathwater, sidelining the sacred and casting off tradition in a doomed attempt to appear 'relevant' to a Zeitgeist which was already, in the late 1960s, shifting and morphing into something quite brazenly anti-Christian.

The reformers, unlike the Inklings, lacked imagination. Their 'Spirit of Renewal', one feels tempted to conclude, has enjoyed its greatest successes only in de-mythologising large swathes of Catholic life. The body of work left behind by the Inklings, on the other hand, has helped re-mythologise the world and baptise the contemporary imagination. The Christianity of the future prefigured throughout the Inklings' oeuvre is different to post-Vatican II Catholicism. Like the Tridentine Church, it revolves around the sacred and is faithful to tradition, but is guided more by imagination than legalism, consecrating and making holy God's great gift of creativity - the 'flame imperishable' that Iluvatar, in Tolkien's Ainulindale, hurls forth into the void at the beginning of the world to bring life and light to all things.

Let us conclude, on that note, with a passage from Philip and Carol Zaleski's outstanding 2015 Inklings biography, The Fellowship. These two paragraphs, in my view, illustrate and explain exactly what the Inklings were (and are and will be) all about:

Fan fiction, derivative fantasy novels, and sophomorphic imitations aside, it is plain that Tolkien has unleashed a mythic awakening and Lewis a Christian awakening. Tolkien fans are often surprised to discover that they have entered a Christian cosmos as well as a world of Elves and Hobbits; fans of Lewis's apologetic writings, on the other hand, are often discomfited when they learn about their hero's personal life, his relationship with Mrs. Moore, his hearty appetite for drink and ribaldry, and his enduring affection for the page and planetary gods. But Tolkien's mythology was deeply Christian and therefore had an organic order to it; and Lewis's Christian awakening was deeply mythopoeic and therefore had an element of spontaneity and beauty often missing from conventional apologetics.

The Inklings' work, then, taken as a whole, has a significance that far outweighs any measure of popularity, amounting to a revitalisation of Christian intellectual and imaginative life. They were twentieth-century Romantics who championed imagination as the royal road to insight and the 'medieval model' as an answer to modern confusion and anomie ... Even when they were not on speaking terms, they were at work on a shared project, to reclaim for contemporary life what Lewis called the 'discarded image' of a universe created, ordered, and shot through with meaning.

Philip Zaleski and Carol Zaleski. The Fellowship: The Literary Lives of the Inklings. New York:  Farrar, Strauss and Giroux, 2015, p.510.

Posted by John Fitzgerald at 14:38

One way that this might work is if someone was to have a spiritual experience - such as a prophetic dream, a vision, a striking synchronicity. Mainstream culture would explain-this-away as having some 'material' cause (brain malfunction, random coincidence, wishful thinking, a lie - or whatever). But because of Tolkien and Lewis, nestling deep in the hearts of so many, then some people might instead regard such as experience as a glimpse of another world accessible to imagination but not the senses: that same world that Tolkien and Lewis describe in fictional form. It could then become the basis of an awakening.