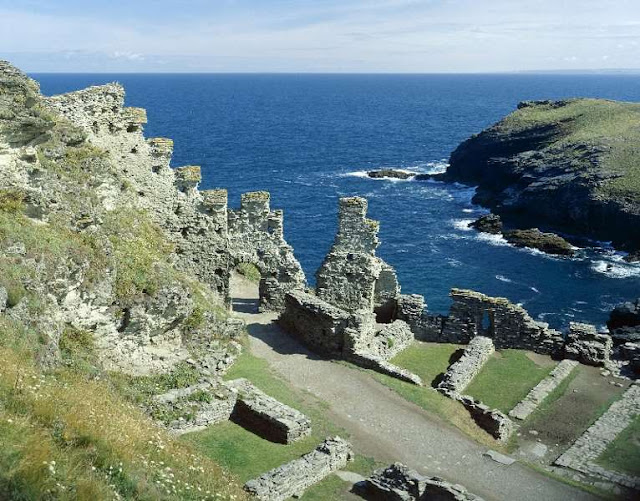 I have been reading a short essay by the Eurasianist thinker, Laurent James. The piece is in French and can be read at his site www.parousia-parousia.blogspot.co.uk.

James uses the results of the first round of voting in the recent French Presidential election as a springboard for a meditation on two competing visions of his country - what he calls 'Gaul' and 'France'. Gaul for him represents an imaginative, intuitive, spiritually-attuned worldview inherited from the Celts, while France stands for a quantitative, rationalistic understanding of the nation's role, beginning with the Frankish kings and continuing up to the newly elected President.

A similar dynamic is at work in Britain too, I feel. On the one hand an ambience of restless activity, financial and emotional insecurity, and growing social and cultural fragmentation; and on the other the 'still centre' of the great cathedrals, the rugged coastline, the lakes and mountains, and the ramparts, hill-forts and 'tors' of pre-Christian antiquity. William Blake called this second aspect 'Albion', and it is his evocation of the primordial spiritual essence of this land that animates both his poetry and his painting and accounts, I believe, for his enduring popularity.

This is the eternal Britain, the true Britain. It has always been here and always will be. Sometimes it is visible, other times not. It is occluded at the moment but will emerge again into the light of day, like the Hidden Imam in Shia Islam, at the appointed time. The current dispensation, in my view, is not as solid as it seems. The contemporary West lacks any kind of religious or philosophical underpinning and therefore, despite all its technological achievements, cannot continue indefinitely. Its fall is assured.

What will replace it then? All kinds of doom-laden scenarios inevitably spiring to mind, but I would like to think that the present order, which ignores reality and pretends it isn't there, will cede place to a general awareness and waking up to the things that are fundamentally real and true. This doesn't necessarily need to be articulated in a political programme or a set of beliefs. Truth and reality lie at a deeper, more instinctual level. Type 'Tintagel' into YouTube, for example, and look at some of the clips of the castle and its surroundings. Feel the elemental rawness of it all - the sea, the sky, the stones, the silence, the sun, the wind. As William Wildblood recounts in his book, Meeting the Masters:

'When, on a trip to Cornwall with my family, we visited the rocky promontory of Tintagel, I had my first exposure to one of the sites of the Western Mysteries. Naturally I knew nothing of that tradition then nor was I aware that some places truly are places of power but my lack of knowledge did not stop me being deeply affected by the castle and, more especially, its setting. The sea, the stones, the wind and mist all combined to thrust me back into an archaic past when the veil between the spiritual and material worlds dissolved much more readily than it does now.'

This is the baseline spiritual orientation our society has lost - a deeper reality existing beyond and before words and concepts and emanating from the heart - our own hearts and the heart of the land. We have slipped our moorings and turned our backs on the deepest part of ourselves and our country. We have forgotten who we are, individually and collectively, losing sight of God in His most basic, primal form. We are left with a spiritual vacuum and this, I feel, is the underlying metaphysical reason for why we are being attacked at the moment.

Reconnection with this sacred core - on both the personal and national levels - is the first and most necessary step towards a religious renaissance in the UK. The specifically Christian elements of this revival will make themselves clear in time. For now, the most important thing is simply to recognise the hand of God at work in both the topography and history of our 'sceptred isle', so that we are at least facing the right way again.

We shouldn't fuss and fret, therefore, about how this reorientation might play out in the political realm. Laurent James, in his piece, has critical words to say about both Marine Le Pen and Emmanuel Macron. A vote for Le Pen, he suggests, is a vote for the aggressive French state that attempted to crush the Gaulish spirit, while a vote for Macron would endorse the Western globalism which is strangling the French nation in its turn and doing to France (and every other country) what France did to Gaul. It is a false choice, in other words, and the hour of the Great Battle and the true, spiritual nationalists - the sons and daughters of William Blake - is not yet at hand.

We are the lantern bearers, and we should refuse to be drawn. Our vocation is to sit lightly to the revolving door of Presidents and Prime Ministers, take the world's bluster with a pinch of salt and not be intimidated by the darkness thickening around us. Ultimately, it has no reality. Our role is to watch, wait, pray, and tune ourselves in to the Truth, passing on the torch, when and where we can, in thought, word and deed, so that when the great horn sounds and the gold and silver standard of Christ in Glory is unfurled, we may be in every sense ready, prepared and 'on point.'

As the little Welsh priest in Rosemary Sutcliff's Dawn Wind declares on hearing of the Saxon advance:

'Brothers, the Light goes out and the Dark flows in. It is for us to keep some Lamp burning until the time that we can give it back to light the world once more; the Lamp, not of our Faith alone, but of all those beauties of the spirit that are kindled from our Faith, the Lamps of the love of wisdom in men's hearts and the freedom of men's minds, of all that we mean when we claim we are civilised men and women and not barbarians.' 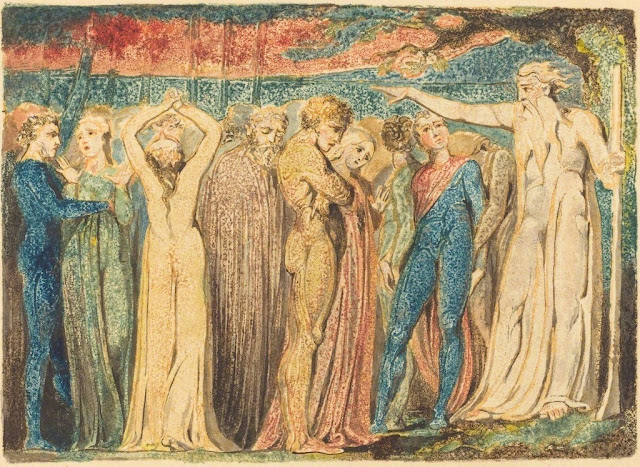 William Blake, Joseph of Arimathea Preaching to the Britons

Posted by John Fitzgerald at 14:23

Wonderful post! Eternal, and yet topical - just the necessary antidote to election day.

You are right in emphasising the need for a right attitude - perspective, motivation, trust in God... This will serve us well, when detailed plans and schemes merely distract.

Let me echo Bruce's comment, John. That's a beautifully written and inspiring post which puts the present confusion into perspective and gives us cause for hope in the eternal.

Thank you very much for this impressive text, directly connected - from my point of view - to the journey of Joseph of Arimathea from Haifa to Ireland. This journey is punctuated by the so-called seven sanctuaries to St Michael.