Blake, Albion, Jerusalem and the nature of prophecy 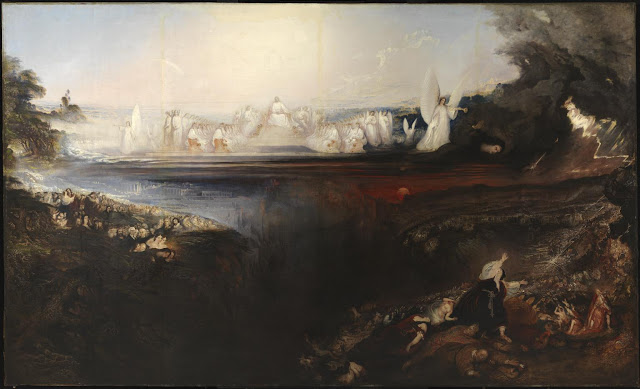 The Last Judgement - by John Martin﻿


People are unaware of their positive values, explicitly those which hold Albion together - they are, indeed, unaware of what is Albion; of our bounds and content.

These were made by past genius - and not by known work, but ultimately by the thinking of past genius; these discovered, remade, added to the soul of Albion.

William Blake wrote poems, such as Jerusalem - which is widely known and sung; he painted and illustrated, composed lyric poems, aphorisms, and vast prophetic verses... But Blake's true role in Albion was to remake the nation at so deep (or high) a level that it is beyond perception; and not fully-knowable as a communication.

The principle act of Blake was his direct knowledge of reality, and then his shaping of reality... The reality of God's creation; that reality which can be known directly by you, or by me, or by anybody (now, or in the future). This is the imperishable legacy of Blake - and there were other as well as Blake (Langland, Chaucer, Shakespeare, Milton...).

So Blake's poem Jerusalem (to take an example) is true - when it was conceived it became true because it was written-into creation; that is the nature of prophecy.

For you and I to talk or write or read about creation involves us in indirectness, in symbolism, in 'communication'. But we can understand each other when both of us stand-before the poem Jerusalem as it is written into creation.

(Everything else is indirect and second-order; to contemplate creation alone is primary, sure; because direct.)

**
And did those feet in ancient time,
Walk upon England's mountains green:
And was the holy Lamb of God,
On England's pleasant pastures seen?
And did the Countenance Divine,
Shine forth upon our clouded hills?
And was Jerusalem builded here,
Among these dark Satanic Mills?

Bring me my Bow of burning gold;
Bring me my Arrows of desire;
Bring me my Spear: O clouds unfold;
Bring me my Chariot of fire.
I will not cease from Mental Fight,
Nor shall my Sword sleep in my hand:
Till we have built Jerusalem,
In England's green & pleasant Land.