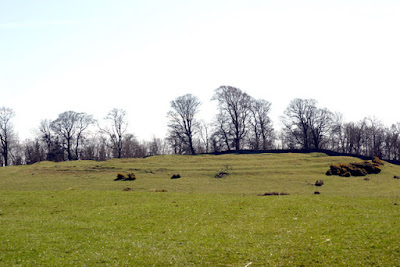 A neolithic temple ('rems of'), near Bolam Lake, Northumberland

One of the best books I have read is the novel Jonathan Strange and Mr Norrell by Susanna Clarke (2004). This seems to be one of those very long novels that some people love, and others find dull - for me it is a sheer delight, from start to finish.

The underlying theme of the book concerns the restoration of magic to England; once the most magical of all countries when the North was ruled by The Raven King up to about 1400, but after he disappeared, magic incrementally dwindled to nothing. The novel is set around 1800, the depths of the 'Enlightenment' era, when magic begins to return.

Reading ancient sources, it is clear that England (including Wales) was indeed one of the most magical of places for a very long time. Our rural landscape is studded with 'lumps and bumps' - the remains of burial chambers, standing stones and stone circles, causeways and earthworks; going back anything up to 8000 years ago (the hunter gatherer 'mesolithic' era).  And almost all of these remains are religious or spiritual - what the archaeologists call 'ritual'.

Our ancestors, who we assume lived a life of extreme simplicity, frugality, and physical hardship - were also living a life of immersion in the world of spirit - that is what they seem to have cared about more than anything.

When the Romans first invaded under Julius Caesar, England seems to have been the religious centre of Western Europe, and the site of its druidic colleges. When Christianity arrived, it is possible that Glastonbury was one of the first centres outside the Holy Land; and from then onwards the religion was never eradicated - surviving the Dark Ages in the Westermost parts of the island (and in Ireland) before joining-up with the Anglo Saxons when they had converted - the old and new meeting and converging again at Glastonbury.

Anyway; religion was apparently The Most Important Thing for the people of England for a long time... but it did become very authoritarian in the Middle Ages (an instrument of Norman oppression) and after the industrial revolution, in particular, England became one of the least religious (and least spiritual) countries in the world (perhaps rivalled only by France); known for its practical, common sense, shopkeepers mentality - and the development of the atheistic and ultra-materialist materialistic anti-religions of socialism and communism.

Nowadays, our public life is of almost indescribable sordidness, shallowness, spite and hedonism.

And yet, and yet - knowing all this; I only need to drive out a few miles and take a walk in Northumberland, Country Durham or Cumbria and I am spontaneously, almost effortlessly and irresistibly, reconnected with that ancient spirit of the place.

None of this has much to do with the people - although I still do meet quite of lot of ordinary people who have a good but latent - deep buried - side of implicit, goodness and spiritual connection about them...

My point is that this side of Albion, which seems to emanate from the actual structure of the land, remains very powerful; so powerful that its intoxication can and does make me forget all the other and horrible stuff.

To the point that I sometimes feel that 'all we need to do' is bring this to articulation', raise it from an implicit feeling to explicit knowing; and we have Done It: done what needs to be done>

It is as if the Raven King is watching and waiting, and might return at any moment, when the time is ready, when asked.

But not any kind of return to a former state - but as a significant part of it, a new, mystical connection with all of those relics and residues I mentioned - with what is currently abstract history and archaeology; a direct apprehension of the ancestral spirit which makes up the very stones, vegetation and spiritual bones of the country.

I know just what you mean here, Bruce. My particular area was Wiltshire and Somerset but the whole country has areas of magical power. It's all very dormant at the moment but presumably could be awakened one day. But it's not the people who give power to the land. It's the land that gives power to the people.

Apparently the people who were really in touch with this magical power and who built the stone circles etc were very different to the populations that came afterwards from Europe. Abut 4,000 years ago, or so I've read from recent genetic analysis, the ancient populations were largely replaced by incomers from the continent. It would be interesting to know if anything of them still survives in the dusty corners of our psyches.

I would use the term "mythos" rather than "magic", for several reasons.

The supernatural as a whole has several categories, and while magic is one of these and does have a strong presence in the ancient English mythos, the ancient magic of England is the darker side of that mythos. Of course, much of the ancient religion of England is very dark as well, some of the purest examples of the worship of darkness are found in ancient England.

Darkness does not reward worship, though any valid mythos must acknowledge the power of darkness. Thus the worship of darkness is a mistake, but one that can teach us about what is missing in the superficial and vain superstitions that try to deny it. No religion can have power unless it acknowledges that supernatural darkness is real.

But JS & MN makes a glaring error in that it fails to deliver a Happy Ending while claiming to be a Complete Story. Understand that I am not saying that it offends my taste, or breaks some rule of style---I am saying that it is not true, in the sense that all the rest of the book is true. If fiction can indirectly highlight truths like Englishness and the necessity of magic, it can also indirectly tell lies about Justice and Mercy. A pillar of eternal night is no one's fate, if they do not wish it.

@SPD - I agree with your general point concerning the need for a happy ending or eucatastrophe - but I find that Strange and Norrell *does* have a happy ending; because, by the end, I cared more about Childermass than either Strange or Norrell.

And also, S&N seem pretty happy about their fate - they have become utterly absorbed by the practice of magic; and I think they will be released after 100 years (that is what the conversation between Strange and one of the female Fairies in Lost Hope seems to imply), or maybe they will learn how to break the enchantment before that time.

And I am happy because English Magic has returned, and the country is full of practising magicians!

The person I feel most sorry for is Arabella - but she at least has a close and compatible friend to console her (Miss Flora Greysteel), and the relief of having escaped the horrible fate of being enslaved (seemingly forever) by the Gent. with the Thistledown Hair.

Lord of the Rings provides an analogy - the original hero, Frodo, has a rather unhappy ending (in the sense that he is unhappy); but by that time Sam has become the hero, and he has a straightforwardly happy ending (especially if you read the Appendices).