Where is Albion nowadays? 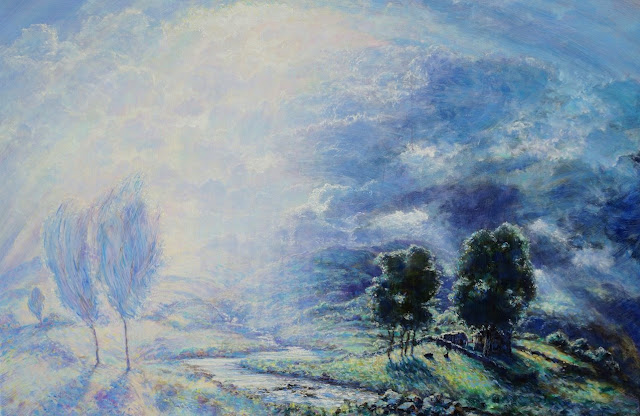 On the one hand I can't rid myself of the conviction that Albion - the ideal of England, and of the island of Britain - is a reality; because at times it is experienced as absolutely solid, palpable, 'obervable'; something I can rest-upon and build-from...

On the other hand, I am of the conviction that all institutions are corrupted and net-evil; and therefore Albion is not represented by any group, system, organisation, or anything of that kind. Allegiance cannot - or should not - be given to any actually-existing institution...


So where is it? What is the actual location? There are two answers: one only semi-true but easily understood; the other wholly-true but hard to express.

The semi-true idea is that Albion is found, from time to time, in some specific people, places and things.

The wholly-true idea is that Albion is a truth that cannot be found in the material world because - while real - it is an immaterial, a spiritual, reality.


What kind of thing might Albion be? A partial answer - en route - could be something like the idea that Albion is an archetype of the 'Collective Unconscious'; which should mean that it has an objective reality, accessible universally; being something that exists in a realm independent of individual minds (Not arbitrary, Not a product of wishful thinking)...

But... the idea of Collective Unconscious is actually insufficient and incoherent, because a Collective mind that is Un-conscious means that it cannot be known directly, but can only be known by inference and implicitly.

Yet, without direct knowing, we cannot really know. Because then everything is secondary, incomplete, subject to distortion, incommunicable with accuracy and confidence... If the Unconscious is primary, then life is just a kind of delusion; each person most-likely having a different delusion.


So, if Albion is really-real, as I feel is the case; then Albion is a part of the Collective Conscious; an immaterial/ spiritual realm that is objective and universal and also directly knowable by each person. In fact, that is exactly what reality actually-is; since the sensory perceptible realm is Not knowable, but changes and is different for each person.

Albion is real to those who know it directly - and consciously know that they know it. Not despite, but because it is in the immaterial Collective Conscious; Albion is as solid as reality itself.

And what we personally happen to perceive (see, hear, touch, smell, taste), at this moment, in the flux of everyday experience; is irrelevant to that reality.


Note: The idea of a Collective Conscious, and the contrast with a Collective Unconscious, derives from Owen Barfield.
Posted by Bruce Charlton at 22:52

For someone like me who believes that a human being is made up of spirit, soul and personality in which spirit is the seed of God within us, our being, soul, our spiritual self or true individuality, and personality our material self or conventional mental, emotional and physical being, that which we are aware of in everyday terms, Albion would correspond to the soul of the country. This is something we are supposed to be growing into but which primarily exists on a higher spiritual level. It would be like the Narnia that the faithful characters found themselves in at the end of The Last Battle.

I realise this is a little vague but what it amounts to is the ideal but real pattern of the country.

Obviously one doesn't try to explain difficult philosophical concepts philosophically to young children. But (serious question) how would one go about teaching children about this? Granting that "Albion" is important, is it not something the children need to know?

Surely a book that will interest people interested in Albion is Copsford. The link above is an invitation to seek out a copy and read it. Perhaps one of the bloggers here will do that, and report.