My last post contained a lot of pagan Albion and there's a lot more, enough to fill a large book. But I want to move on to Christian sites because I really do think that Christianity in England was a little different to anywhere else and some of that is down to the Albion influence which I shall leave mostly undefined. The impression I get, though, is that medieval English Christianity, or some aspects of it, owed a good deal to an affinity with Nature especially as manifested by some of the early Celtic saints who, in turn, may have got this as a legacy from prehistoric native religions such as the one that would have been practised at Avebury. These earlier traditions were purified and baptised by Christ but the good in them survived as a strain in the new Christianity.

The story of Christ's visit to these shores as a young man is usually dismissed as legend. But I find it much more convincing than the other stories that he travelled to the East and received some kind of mystical training in India. That makes no sense whatsoever. There is nothing of Eastern religion in Christ's teaching. There really isn't. He was a Jew, speaking squarely from within the Jewish tradition. But the idea that he came to England with his uncle, Joseph of Arimathea, is not beyond the bounds of possibility. Which doesn't make it true, of course, but it would fit in with our sense of there being something of deep spiritual significance locked up in the heart of this island. Perhaps this story is best left as a legend which has its own power and ability to inspire on the level of the imagination. But maybe.....

How can one write of Albion without mentioning Glastonbury? It's a sad fact that anything pure and holy will inevitably come under attack from demonic powers, and this is surely true of Glastonbury from the destruction of the abbey during the dissolution of the monasteries in the 16th century to New Age tourism and the present day association of the name with a music festival that celebrates the complete separation of the instinctual from the spiritual thus facilitating falling below the rational self instead of rising above it. But, despite all these depredations, the ruined abbey still retains something of its ancient peace and sanctity. Whenever I have visited it there has seemed to be a kind of clarity in the air as though some light from higher worlds was seeping through into this one. I don't doubt that where men and women have lived lives dedicated to prayer and holiness that affects the quality of the location, and when that location is one of the Earth's sacred spots in its own right, the effect is magnified. 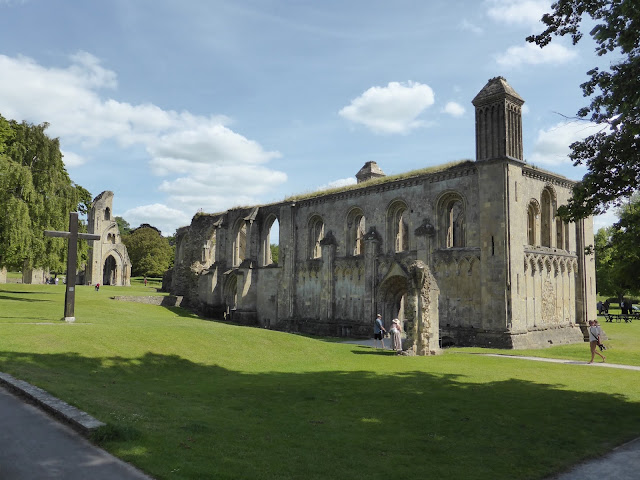 Just down the road from Glastonbury is the city of Wells. Wells is not very big but it is a city because it has a cathedral. This is the seat of the bishop of Bath and Wells, and it was built between 1175 and 1490, though there had been a church there since the 8th century. As Gothic cathedrals go, it is not that large but its most striking feature certainly is. This is the West Front which is 100 feet high and 147 feet wide. It is a stupendous sight now but would have been even more dramatic in the Middle Ages when the many beautifully carved life-size figures illustrating the Christian story were all painted in bright colours. For people at the time this would have been like a trip to the cinema, telling stories from the Bible with many different characters represented, Old and New Testaments both included. 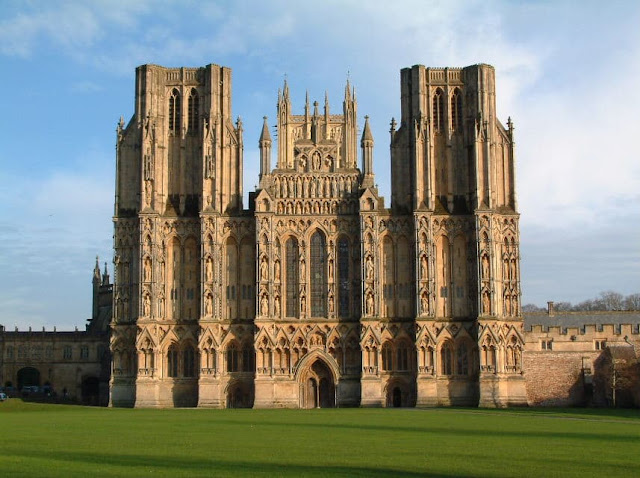 Forgive me for including another ruin. But ruins have long been recognised as something deeply evocative. They are not just broken buildings but seem, by the fact of their physical destruction, to allow something of the spiritual essence behind the outer form to be made manifest. This is especially true of religious buildings. There is also the sense of how time consumes everything, even the most durable of substances. A ruin, by its very reminder of the transient nature of things, speaks of eternity on a higher level. 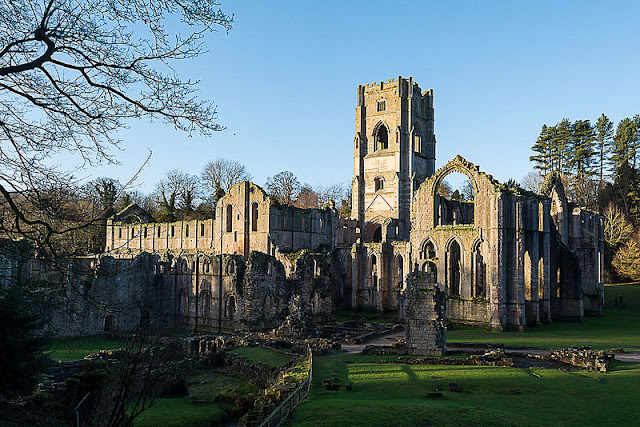 This is Fountains Abbey in Yorkshire, a Cistercian monastery founded in 1132 by monks seeking a remote site to practise a more devout way of life than had been possible for them in the city of York. That's part of a common pattern in which those wishing to lead a contemplative life remove themselves from centres of worldly distraction. A criticism is that they can escape from the world outside but not the world within which will be with them wherever they go. While admitting the truth of this, it is equally true that there are helpful and unhelpful atmospheres in which to pursue the spiritual life and you are much better off seeking an environment which best reflects the inner state you wish to cultivate or, at any rate, does not actively work against it. That is also why those who would take the spiritual path seriously are advised to seek the company of like-minded souls and avoid worldly associations. This is not always possible and sometimes the opposite is required. After all, Jesus was criticised for mixing with sinners. But then he was Jesus.

Fountains is Britain's largest monastic ruin. The abbey was rich at one time, mainly from trading in wool, a major source of medieval England's wealth. But, like Glastonbury, it fell to that act of national vandalism which was the dissolution of the monasteries, surely a time when the anti-Albion forces were let loose and given their head. Whatever the abuses that may have existed in the religious world, for a nation to overturn and smash its spiritual heritage so completely is quite simply an act of self-destruction. There is a big difference between moving on from a tradition having fully absorbed all its lessons to demolishing it with nothing comparable to take its place. Some people might think we are engaged on a similar path now. 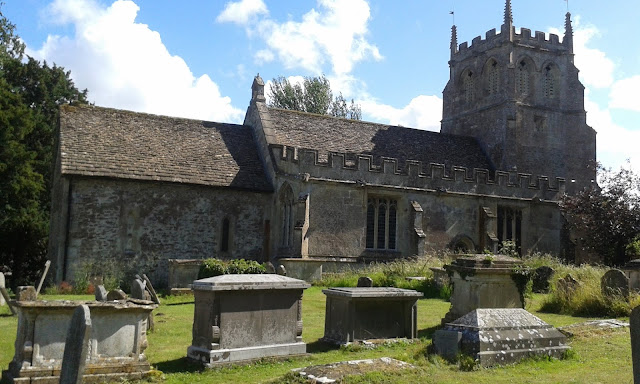 From the grand and nationally important to the small and local. This is St Martin's church in the Wiltshire village of Bremhill. It's of personal significance to me as my parents are buried here but I don't include it for that reason. It earns its place because it seems to capture a quintessential Englishness. The construction of the church goes back to around 1200 AD and the tower comes from the later 13th century with 15th century additions. Inside, the worn flagstones speak of generations of local people being christened, married, buried and, of course, worshipping here. The priest when I used to go had formerly been a tax inspector which has a noteworthy antecedent, and the local pub, as is proper, is only a short walk away. All this represents Albion in its domestic and familial mode which may not be the most romantic or mythically enticing of its aspects but might just be the one that is the basis of everything honest and human.

When Christianity came to Albion it was recognised by the wise as the fulfilment of pre-existing spiritual traditions. These pagan religions, originally based on psychic and intuitive responses to natural cycles and supernatural powers, were superseded by the Christian revelation but left their mark in many ways. Where they were absorbed and transformed by Christianity you had the best of both worlds, and Christian Albion is the fruit of that.

Posted by William Wildblood at 04:37

Interesting article, you might find this publication of interest as it coincides with your time period and the arrival Christianity in England. Chip.

Remove not the ancient landmark, which thy fathers have set. --Proverbs 22:28

Dear 'Anonymous' - If you look at the blog description, you'll see that the ususal policy is Not to publish anonymous comments; so please use a pseudonym.

Two things - first, the other day I came across a parallel being drawn between the dissolution of the monasteries and our present university system; it's not impossible that the monasteries at that point had become spiritually toxic! Second, you might find the following of some interest, which chimes with the themes of this site! http://elizaphanian.com/?p=6048

I take your point about the monasteries of the time and the present day university system. They probably needed a thorough purification. But it's more the wanton destruction I'm talking about. There was a spiritual heritage that was vandalised and I don't think the motive behind that was a noble one. That's speaking as someone brought up in the Church of England.