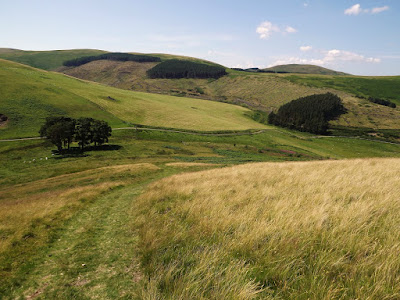 Finding the true Albion is generally depicted as a matter of discovering some place or persons that are physically hidden. The emphasis is on finding; and what is found is objective: everybody would recognise it, naturally, if only they could find it.

This leads to strategies such as pilgrimage, seeking sacred places, perhaps ancient places: there are lists of such places. Sometimes people use technologies such as finding ley lines on maps, or dowsing for sources of power.

The general strategy could be termed 'In Search of...' as in the old and highly influential guidebooks written by HV Morton starting with In Search of England in 1927 (followed by Scotland, Ireland, Wales etc.) - the general idea being that there is an Old/ Folk/ Traditional England still in existence if only you know where to find it...

Innumerable travel books are of this type. Indeed, this attitude might (rather harshly) be described as a spiritual tourists attitude to hidden Albion - the idea or hope that we might be-transformed-by what we discover. But it does not really work, and indeed Morton's and most such books (also TV programmes, articles and other reports) are journalistic contrivances: fakes, that affect an exploration and claim a personal transformation that never happened.

But the proper and actually-effective way of discovering hidden Albion is almost the reverse of this - in that we must first transform our consciousness, and only then should we seek hidden Albion with the possibility of actually finding it.

Because, it will turn out, Albion is hidden in plain sight - imperceptible to those who have not already been so-transformed. If hidden Albion is certain people, places, and things - then you could take 99% of people to them, show them, pick up and handle them, speak with them... and the average person would see nothing except the usual disenchanted, normal, mundane ordinariness...

(After all, if the real Albion could be found in a guidebook, it would soon be obscured, blighted, or destroyed by the forces of evil - as has incrementally already-happened to the famous spiritual centres.)

Because it is the mainstream, modern materialism - our in-principle denial of the reality of the 'spiritual' which is what hides Albion. Even if, by a brief alignment of person and place, the hidden Albion was noticed momentarily - a moment of magic and meaning and a revelation of purpose; it would not be 'detected', it would be denied - it would be regarded as wishful thinking, or some kind of coincidence of mood and place, or a delusion.

Once we have a consciousness that is prepared to accept the hidden Albion as real: then we can embark on the quest to find it. And then we will be assisted (if necessary) in our search, and nudged and guided (minimally) so as to make that encounter.

What we must find is not a location or particular terrain, but a way of life and relating to each other.

A way of life is not embodied in land or artifacts, it is embodied in people who live that way.

And to know that way of life well enough to identify those living it, you must also be living it in at least some degree.

It's a question of how to begin, where to start; and (perhaps unfortunately, given people's aversion to metaphysics) it is necessary to work on our-selves first, because without this we will be (as so many people very obviously are) unable to benefit from any kind of experience.

I'm currently re (re...) reading The Last Battle, and we see that powerfully depcited, no actual or possible knowledge is sufficient to teach some people the truth.

We see it in modern culture as well, when the mainstream mass evil is being refuted scores of times every day by experience; yet the mass of people are utterly unable to benefit from this experience because the assumptions negate the potentially-enlightening/ awakening effect of any and all possible experience.

The horror and incoherence of mainstream 'reality' is so pervasive and on-the-surface that it demonstrates the *fundamental* nature of our error, and the evil of our choices.

On the other hand; (here and now, in The West) a person who is properly grounded in true assumptions finds it clearer and simpler consciously to discern reality than ever before in history.

I think by your last assertion you mean that at this time a person grounded in truth will find it easier to see the vast gulf between reality and what the world believes.

Whether that makes it easier to discern reality itself is probably dependent on the individual, and probably also what aspects of reality one is trying to discern. Still, on the whole it probably is an advantage when you at least know where one will not find those who are living in accordance with reality.

Albion is not the only aspect of reality. But it is a reality, and thus won't be found in the modern world.

""For example, suppose I tell you that by awakening a certain chakra or invigorating some of its petals, then you will achieve inner peace. Does that knowledge bring you inner peace? Of course not. First of all, it is necessary to achieve inner peace — I prefer the term ataraxia — and then perhaps you can see how the chakras change in response."
http://www.gornahoor.net/?p=10182
Cologero, author of Gornahoor website.

Do you follow it at all? A great post...I grew up loving old England, so your work sings to me.