The insanity of Blake as co-opted by radical Leftist atheists! 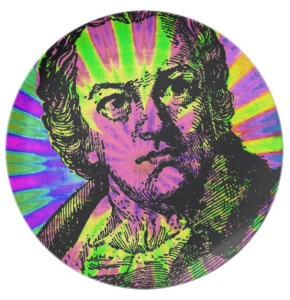 The above (linked) nonsense is - I judge - typical of the way that William Blake is understood and taught nowadays - in a culture that has so completely and vehemently rejected Blake's mystical Christian metaphysics - and so fully adopted a this-worldly metaphysics of atheism, materialism and socialism - as to render the reality of Blake all-but invisible!

Interestingly, this way of ultra-selectively reading Blake dates back to Jacob 'Ascent of Man' Bronowski's 'Man without a Mask 1944 study. Bronowski was himself a prominent atheist humanist and internationalist communist in politics (at this time of his life, anyway).

What is interesting to me is the way in which metaphysics - that is, a person's fundamental assumptions regarding the nature of reality - functions in a manner identical with insanity; in the sense that the presumptions shape reality to such an extreme extent that a writer who almost continuously talks of Jesus, angels, and the spiritual - who writes again and again of Albion in the most mystical and prophetic fashion, can be seen as primarily a proto-socialist, dedicated to socio-political revolution on the lines approved by modern Leftists!

As an antidote - here is a long excerpt from Blakes prophetic poem Milton - spoken by the Milton character - prophetically of the horrors of exactly the rationaism, reductionism, and scientism that was s eloquently advocated by Jacob Bronowski (among many - far less eloquent - others!).

Take note, particularly, of his account of the 'idiot Questioner' - who sounds like the typical mainstream modern Establishment politician/ journalist/ professor - close-kin to the author of the Socialist Review article:

"Remember the word that I said unto you, The servant is not greater than his lord. If they have persecuted me, they will also persecute you; if they have kept my saying, they will keep yours also."