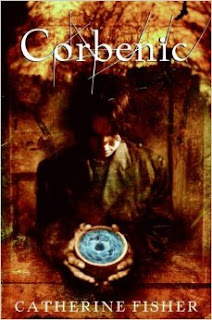 'There are two sorts of life, aren't there? The one that seems ordinary, like this, and then the reflection from it. Curved, shiny. All mixed up.'

Catherine Fisher (b. 1957) is a Welsh novelist and poet whose work is deeply imbued with the myths and legends native to both Wales and England. Widely viewed as a Young Adult writer, her stories have an energy, fluidity and intensity of vision which makes most contemporary 'grown-up' fiction look pale and one-dimensional.

I have read six Catherine Fisher novels since discovering Corbenic in late 2015. All are excellent (for   further details please visit www.catherine-fisher.com) but Corbenic remains the pick so far for me. What comes over particularly strongly, having recently reread it, is the author's profound immersion in the Grail mythos. She has absorbed the legends, thoroughly and deeply, and let them form her imagination. Corbenic, therefore, is far more than a yarn based on anthropological research or detached, 'folkloric' study. What gives it its magic and inner force is the captivation Fisher displays for its central symbol - the Grail - in every word she writes. Anyone who describes the Grail procession like this, for instance, clearly reveres and loves her subject, understanding it intimately, approaching it intuitively, not from 'out there' but 'in here':

There was another room. There had been no door before but there was now, and the boys with the spear and the candlesticks walked in there, and the girl did too, and as she passed she raised her face from the glory of the Grail and gave Cal one look, quick and rapt. And he was seared with the sudden joy of it, the nameless, unbelievable joy, but the door swung shut and the light was gone and the music was back, as if it had never stopped. (p.27)

Corbenic, in essence, is a modern-day recasting of the Percival story - the gauche youth who leaves his mother's home in the woods to become a knight at King Arthur's court. Cal, a spiky and emotionally wounded teenager (his actual age isn't mentioned in the book, but he seems about seventeen) leaves his alcoholic mother and his home in Bangor to begin a career at his uncle's business in Chepstow. As he passes Ludlow on the train he falls into a doze, wakes up in a fluster and gets off at the wrong stop, a place called Corbenic which, Cal later discovers, is not to be found on any map. His encounter with the Grail King and his attempts to return to Corbenic propel the novel towards its conclusion. There are a wealth of mythic themes and motifs bubbling up under the surface of the plot, however. Most prominent, perhaps, is the presence of King Arthur and his retinue, disguised as a battle re-enactment group known as the Company:

They were Arthur's Company, and they had each taken on one of the characters from the legends, and they lived it, as if they really were those people, as if they'd been alive for centuries, not in some cave asleep, but here, still living, still guarding the Island of Britain from its enemies. Sometimes Cal thought they really believed they were Arthur's men. Sometimes he almost believed it too. (p.91)

This is a highly enticing idea and, for myself at least, a comforting one too - that Arthur and his band are still at large, that they have always been here in one guise or another and that they always will be until the day arrives when they reveal themselves in their true shape and form. There are echoes here with the line of 'Pendragons' in C.S. Lewis's That Hideous Strength - the secret kings of Logres; the hidden, mystical side of Britain - 'some of whom are known to history and some of whom are not.'

The same can be said for the Grail itself - that unpredictable and dangerous, yet healing and rejuvenating sacred vessel. The Russian mystic Valentin Tomberg (1900-1973) writes in his final book Lazarus Come Forth on the relationship between what he calls the 'day side' of history and its 'night side'. He regards figures such as Lazarus and Nicodemus, for instance, as belonging to the night side of the Christian story:

They belong to the hidden core of being of Christianity, which is the mystery of 'becoming', i.e. the essence itself of all miracles. (p.120)

The Grail too, in my view, should be seen in this light - an image of high holiness erupting into our 'daytime' consciousness - like the men of Elidor bursting into suburban Manchester in Alan Garner's book - from the secret, 'night-time' realm of Imagination - the creative, archetypal furnace - the place of encounter between the human and the Divine.

There are no barriers between worlds in Corbenic, no line in the sand between the magical and the workaday. The Grail quest is as much about healing hearts, minds and memories as it is about tasting the wine of Heaven. It is all of a piece; all one cloth of gold. The book is about family, community, reconciliation and, most of all perhaps, vocation - about shedding the skin of the false self and coming home to who you truly are, not the person you think you are or the person you suspect society wants you to be. Only when you have become who you are, only when you have hit rock bottom and cried out for help from the depths of your heart, divested of the ego's illusions and pretences, only then can the Grail perform its redemptive role, heal the wounds you thought were beyond healing, and set you on the path of your sacred mission.

None of this is a given, of course. Everything depends (and all the legends, Corbenic included, are as one on this) on the seeker having the wherewithal, courage and good fortune to ask the Grail King the right question at the right time. This is the Kairos - the supreme moment - and the healing of the outer world - the Waste Land - relies on it. Nothing happens in isolation; personal transformation is echoed and reflected in the corporate sphere. The regeneration of the Waste Land will be a day of collective restoration where, as Tomberg puts it, 'all the forgotten truth and love, all the sleeping truth and love of the past, will be remembered and reawakened; and where all bearers, proclaimers, and participators in all truth and love, who have passed through the gate of death, will come again to speak, act, and be influential.' (p.130)

It might seem a grand claim to make for a relatively slender book like this, but it's my belief that Corbenic, in its fluent yet unobtrusive, unpretentious manner, at least points the way towards the possibility of such an individual and communal rejuvenation. It asks the Grail question, in short. That is all any of us are required to do.

Posted by John Fitzgerald at 10:03

I shall take a look at Corbenic - also this book of Tomberg's.

...I find Tomberg both deeply impressive in terms of his insights, and also very alien to me in terms of his general approach (not wrong, but alien to the way *my* mind works - with his detailed focus on symbolism, esoteric micro-structure, 'numerology' and the like).