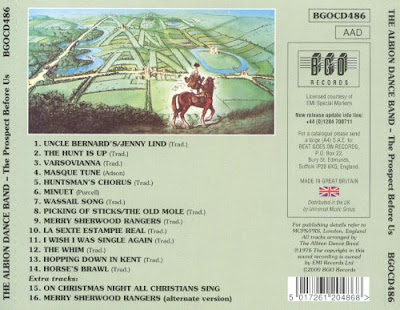 One hot summer afternoon, 20 June 1921, Alfred Watkins was at Blackwardine in Herefordshire. On a high hilltop he stopped and looked at his map before meditating on the view below him.

Suddenly, in a flash, he saw something which no one in England had seen for perhaps thousands of years. Watkins saw straight through the surface of the landscape to a layer deposited in some remote prehistoric age.

The barrier of time melted and, spread across the country, he saw a web of lines linking the holy places and sites of antiquity. Mounds, old stones, crosses and old crossroads, churches placed on pre-Christian sites, legendary trees, moats and holy wells stood in exact alignments that ran over beacon hills to cairns and mountain peaks.

In one moment of transcendental perception Watkins entered a magic world of prehistoric Britain, a world whose very existence had been forgotten.

By John Michell - From The View over Atlantis 1969.

The back of the Album cover of the Albion Dance Band 1977 album, The Prospect Before Us depicts, in a parodic style, Watkins's epiphanic vision of occult meaning in the English Landscape - which, as retrospectively interpreted and elaborated by John Michell, led to the New Age spiritual renaissance as it happened in England