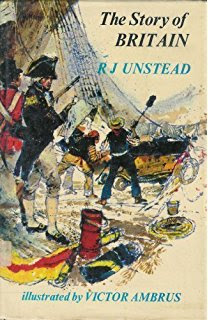 I have studied history for nearly forty years now, yet no historian has made as great an impact on me as the first one I read - R.J. Unstead (1915 - 1988) - a schoolteacher from Kent who wrote or edited  almost fifty books, aimed principally at young readers. Most of these are out of print now, and that is a shame, as there is much we can learn from them. I have just reread Unstead's The Story of Britain (1969) and found it every bit as stimulating and inspiring as I did three and a half decades ago.

The clue lies in the title. Unstead is as much a storyteller as a historian. The Story of Britain is written as a tale, with highs and lows, ups and downs, and heroes and villains a-plenty. There are few concessions to the egalitarian spirit of the age. 'Much of the book,' as the fly-leaf says, 'is about ordinary people; but in the main it tells its story through great figures in British history: the knights and barons, kings and queens, the invaders; the soldiers and sailors, explorers and adventurers.'

Unstead is also unashamedly Christian. His gloss on the period following the Synod of Whitby in 663 illustrates this perfectly: 'English monasteries, English schools, English scholars and churchmen became famous throughout Europe. The Lindisfarne Gospel, with its wonderful illuminated capitals and covers of gold, the carved stone crosses, the new churches and the singing of the choirs in the great monasteries were the marvels of their time.'

I studied history to M.A. level, and the higher I got the further away I felt from the simplicity and the imaginative vitality of Unstead's world. The 'great man theory of history', as they called it, was openly scorned at my last university, and to have mentioned Christianity in anything but a pejorative sense would have invited embarrassed silence at best and outright hostility at worst.

All this is to be regretted. R.J. Unstead believed in the capability of men and women to achieve greatness. This gives the reader agency, liberating him or her from helplessness and passivity. We are so much more than impotent pawns shuffled around on the chessboard of history by vast, impersonal, socio-economic forces. Unstead's Christian faith provides the wider frame of reference a nation needs if it is to bind itself together, become more than the sum of its parts and build a sense of  continuity between its past, present and future. Both these aspects are sorely lacking in our time. Unstead's chapter on King Alfred brings them together in a telling and instructive synthesis ...

... Alfred was not called 'the Great' simply because he was a good general. At heart, he was a man of peace and, in those dire months as a fugitive at Athelney, he had come to realise what his people needed.

Wessex was well-nigh ruined. Trade had ceased, the farms were derelict, the churches and monasteries were roofless and empty. The people were hungry and lawless.

Almost single-handed, Alfred rebuilt the kingdom. He travelled up and down the land, praising and encouraging, building with his own hands and setting others to work. He fetched skilled men from abroad to teach the Saxons the arts they had forgotten, for on every side he found ignorance. 'Hardly a man in the kingdom can read his prayer-book or write a letter,' he said. 'I would have all the boys now in England set to learning.'

Schools were started and even the nobles had to go to their lessons if they wished to receive the King's favour. 'It was a strange sight,' wrote a bishop, 'to see aldermen and officials, ignorant from boyhood, learning to read.'

Since few teachers were left alive, invitations were sent to France, Wales and Ireland for monks and scholars to come and work in Wessex. Not all of them were good men and, to Alfred's sorrow, they sometimes quarrelled. Once, two of the foreign monks actually killed their abbot. But among the newcomers was a Welsh monk named Asser, who became Alfred's greatest friend and helper.

Books had almost completely disappeared, so Alfred kept the scribes at their desks making copies of old books that had escaped the flames. Almost all were written in Latin, for there had been little or no writing in Anglos-Saxon since Bede's time. Alfred set himself to improve his own knowledge of Latin and, with Asser's help, he translated parts of the Bible and works on history, geography and science.

This wonderful man never ceased toiling for his people. He found time for building, writing and governing and was keenly interested in stars, in trade and in foreign places. He rewrote the laws of King Ine and kept in touch with the Pope, for it was his Christian faith that gave him the strength to do so much. As one of the monks wrote: 'The King attends daily services of religion ... he goes to church at night-time to pray secretly, unknown to anyone.'

The noblest man who ever occupied an English throne died when he was barely fifty, but he left an example to his people and a message to his successors. 'I pray thee, my good son, be a father to my people,' he said as he lay dying. 'Comfort the poor, protect and shelter the weak and put right the things that are wrong.'

Just ordered the boxed set after reading the sample.

I think one of the worst ways to teach history is with textbooks that try to be (pretend to be) objective, which usually just means being boring while bringing in various biases anyways.

I much prefer knowing where the author sits, and combining that with an interesting narrative. For example, I have appreciated much of Rodney Stark's recent work on the history of Christianity.

Thanks very much ajb. Enjoy 'The Story of Britain'!

I just bought this, John. 1p from Amazon!