Beyond the Grey Havens 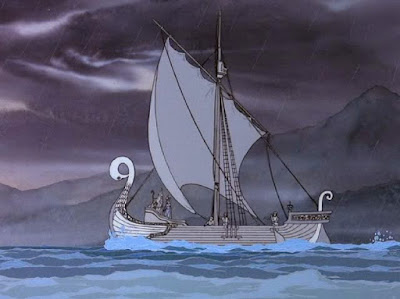 J.R.R. Tolkien's, The Lord of the Rings, has no fewer than three endings - (1) The fall of Sauron and the coronation of Aragorn, (2) The 'Scouring of the Shire', where the hobbits return home, setting wrongs to right and putting into practice the high skills acquired on far-flung fields, and (3) The departure of Gandalf, Elrond, Bilbo, Frodo and Galadriel to the West from the Grey Havens. Tolkien's description of Frodo's arrival at the port, the subsequent voyage and his first sight of the Undying Lands is a thing of shimmering beauty:

Then Frodo kissed Merry and Pippin, and last of all Sam, and went aboard; and the sails were drawn up, and the wind blew, and slowly the ship slipped away down the long grey firth; and the light of the glass of Galadriel that Frodo bore glimmered and was lost. And the ship went out into the High Sea and passed on into the West, until at last on a night of rain Frodo smelled a sweet fragrance in the air  and heard the sound of singing that came over the water. And then it seemed to him that as in his dream in the house of Bombadil, the grey rain-curtain turned all to silver glass and was rolled back, and he beheld white shores and beyond them a far green country under a swift sunrise.

Frodo, his great task accomplished in this world, is rewarded with the achievement of his heart's desire. In his dream at Tom Bombadil's house, early in his adventure, he could hear the sea and was running up a hill to look at it but never reached the top. He was still searching then. Now he has found. The inner truth and pattern of his life has unveiled itself. 'Ripeness is all', as Shakespeare says.

This luminous vision, I believe, is the intended destiny of each and every one of us, articulating, in its primal beauty and simplicity, the deepest longing of the human heart. It points us to the root and source of our being, which ultimately lies beyond the parameters of this world. In his essay, The Weight of Glory, C.S. Lewis says that we all have a desire for a 'far off country' like an inconsolable inner pang - 'a desire for something that has never actually appeared in our experience. We cannot hide it because our experience is constantly suggesting it.' In fact, he says, we were made for another world. What finer illustration of this could there be than the magical Narnian tree growing in Digory's  garden at the end of The Magician's Nephew that bends whenever a breeze blows in Narnia due to the Narnian sap running through it!

The Deceiver, however, wishes us to believe that our deepest desires can be satisfied here in this world. He offers us a range of seductive options that promise everything but deliver nothing, leading only to the dusty corridors and empty lumber rooms of his barren, mechanistic universe. We live and move and have our being in this world. We are meant to enjoy it and do good in it, but it should never be mistaken for our abiding home. It can never fully satisfy. As Ransom is told in Lewis's novel, Perelandra, 'You see only an appearance, small one. You have never seen more than an appearance of anything,' and he sadly realises, 'I have lived all my life among shadows and broken images.'

Tolkien was fully grounded in the flesh and blood reality of this world, while at the same time keeping his gaze fixed on the deeper, wider, truer reality beyond the Grey Havens. As very young men, before the First World War, Tolkien and his friends believed that they had been 'granted some spark of fire ... that was destined to kindle a new light, or, what is the same thing, rekindle an old light in the world.' (Tolkien, Letters no. 5).

Tolkien, through his writings, certainly succeeded in this mission. It is for ourselves, as apostles and evangelists of a new spiritual Christianity in this land, to build on his (and Lewis's) work of imaginative engagement. The way to do this, in my view, is to speak directly to the human heart, the place where this deepest longing sits. This comes before anything else - dogma, ideology, and even our frustration with the societal decay and dissolution of values gathering pace around us. No matter how corrupted, compromised or confused a person has become, that deepest desire - that primal beauty and simplicity - is always there, waiting for a look, a word or a gesture to kindle it into life, blaze forth and shock the world. From there, anything is possible, so that when we, in our turn, arrive at the Grey Havens, it won't be to make an end but to embark on a voyage to a beginning.

All this, in short, is the work of the Holy Spirit. In the words of the ancient prayer, Veni Sanctus Spiritus:

Come, O Holy Spirit, fill the hearts of your faithful, and kindle in them the fire of your love,
Send forth your spirit, and they shall be created, and thou shalt renew the face of the Earth.

Or, as Cirdan the Shipwright tells Gandalf at these same Grey Havens on the last page of The Silmarillion, as he hands him Narya, the Ring of Fire:

'Take now this Ring, for thy labours and thy cares will be heavy, but in all it will support thee and defend thee from weariness. For this is the Ring of Fire, and herewith, maybe, thou shalt rekindle hearts to the valour of old in a world that grows chill.' 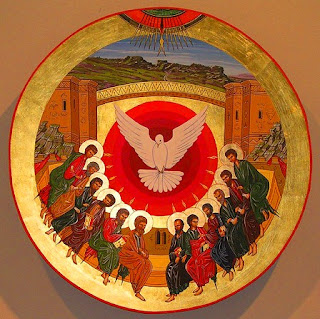 Posted by John Fitzgerald at 16:00

Might we consider restoring an old/the old spiritual Christianity instead?

I was struck by the sense Tolkien and his friends had that they were 'destined to kindle a new light, or, what is the same thing, rekindle an old light in the world.' At the same period a young James Joyce was writing his prayer to Daedalus (from memory) "I will forge in the smithy of my soul the uncreated conscience of my race. Old father, old Artificer, stand me now and ever in good stead." Joyce goes on to reset Homer's Odyssey in Dublin - again at the dawn of the 20th century before the Great War. I first understood through Ulysses that the heroic age was always now and it was in my grasp, no less than that of the ancients, to set out to return to my true home. I think Tolkien reworked Norse myth - indeed the whole pagan understory of Northern Europe - in his own unique way and somehow managed to strengthen indirectly the possibility of our living Christian transformation, while his colleague C S Lewis did so more directly. That generation was special. I have spent most of my life with the study of Carl Jung who dedicated himself to a similar task - perhaps one might say to testify to the objective reality of the soul - which is a very different approach than literature, but which also has not fallen entirely on barren ground.