The modern fake utopia of sustainability - we need something better, now! 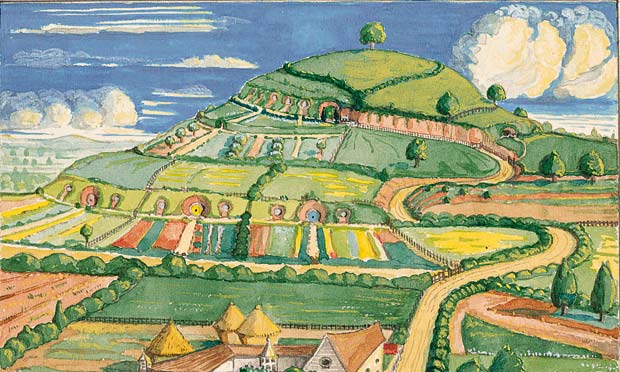 In the late 1960s into the middle 1970s - and perhaps inspired by Tolkien; there was an era of utopianism, based mainly around EF Schumacher's ideas relating to intermediate technology and 'Small is Beautiful' - which he derived partly from Buddhism and the Distributist Roman Catholicism of Chesterton and Belloc, underpinned by the Neo-Thomism of the mid 20th century.

Schumacher also referenced the early 20th century Christian Socialist economist RH Tawney, and his views looked back to the utopian agrarian socialism of the Victorian William Morris (as described in the fable News from Nowhere).

Other themes included that of Self Sufficiency, as advocated in several books by John Seymour - and underpinned by a rather imprecise pantheism (William Blake was oft mentioned). This looked back towards HD Thoreau and especially his book Walden or Life in the Woods - with its how-to-do-it chapter 'Economy'.

This early 70s agrarian utopianism was spiritually motivated - with the economic arrangements and way of life designed mainly to support a spiritually-enhanced way of living; made impossible by modern planned and market economics, materialism, consumerism, gigantism etc

However, aside from Schumacher's late conversion to Rome, the spirituality was vague: too vague - it was subjective, pantheistic, and hedonic; and embracing of the 1960s counterculture imperatives of unconstrained sex, and often drugs (although the pleasures of intoxication from home brewed beer and home fermented wine were perhaps most emphasised).

Because of this lack of spiritual seriousness, and the consequent lack of any focal and organising principle to the ideas; the agrarian movement was rapidly corrupted throughout the 1980s into its present, almost inverted; and in practice hyper-materialist form of a pseudo-utopianism of 'sustainability'... the symbols of which are the blight of wind 'farms' that now disfigure so much of England's most beautiful landscape: 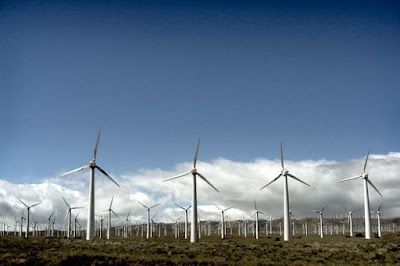 While on the mainstream political 'Right' there is a 'survivalist' bunker-mentality... Everybody else may die, let them die! - but not me. No Sir: my carcass will continue to live, albeit at the spiritual level of a cornered rat. 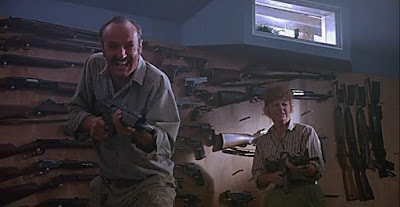 We need utopian thinking now more than ever...

This time it must be spiritual first - which means that the economics and politics need to be derived from the religious aspects and not the other way around. The aim must be life which is religion - religion as living. And that religion must be motivating, inspiring, and encouraging.

There has to be an earthly utopia to aim at, no matter how remote - to order our lives - we require some picture, ideas, fairly-definite notion of the kind of life envisaged: not a detailed blueprint, not a five-year plan, not a flow-chart, not a fixed system - but some inspiring depiction of The Good Life in broad clear outline and bright colours. 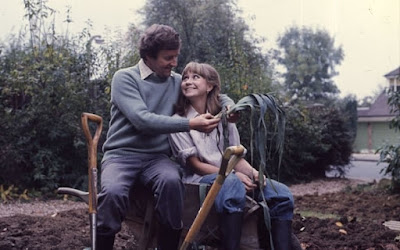 (Note: The above picture is from a popular mid-70s TV sitcom called The Good Life, about some suburbanites who dug up their back garden in order to try and be self sufficient. The humour came from the problems and disasters of this activity - indeed its practical impossibility; but there was a basic appeal to the idea, nonetheless - no doubt enhanced by the dungaree-clad cuteness of actress Felicity Kendall (above) who played the wife of Richard Briers's character 'Tom Good'. Yes - the title was a dreadful pun...)

Tangential, but the Good Life was also one of the few shows to portray its main characters in a happy marriage. I suspect this is all part of the whole.

Some time ago, I happened on an interview with E.F. Schumacher (I think in Christianity Today) in which he says he titled his chapter in "Small is Beautiful" "Buddhist Economics" only because he knew his target audience wouldn't read it if it were more accurately entitled "Catholic Economics," which is what it was. I can't find the article, but there is reference to it here: http://www.christianitytoday.com/ct/2005/julyweb-only/12.0c.html. It's possible his thinking was more deeply rooted in Christianity than this blog post suggests. His path to Catholicism was a path back to Christianity, having been raised in a Protestant home then discovering Buddhist meditation then converting to Catholicism prior to the publication of Small is Beautiful.

@Duggus - I wasn't wanting to get into Schumacher's details - but (according to the biography Alias Papa, with its chapter 'I am a Buddhist', written by his daughter Barbera Wood) Schumacher certainly had a Buddhist-esque phase in the mid-50s influenced by experiences in Burma; which had a powerful effect on the development of his ideas. Gandhi was another major influence.

But from the late 1960s Schumacher had become more and more interested by Catholicism; and he had converted before publishing Small is Beautiful.

Does the modern tendency to reduce everything to the material/horizontal/economic come from a lack of belief in the transcendent?

@MT - Indeed. The trascenedent is excuded by assumption - only the 'material' remains - yet on examination the material is also subjective, and constructed. Result? Nihilism. Despair.

Dr. Charlton, I think you were the one who put me on to Seymour. Thank you.