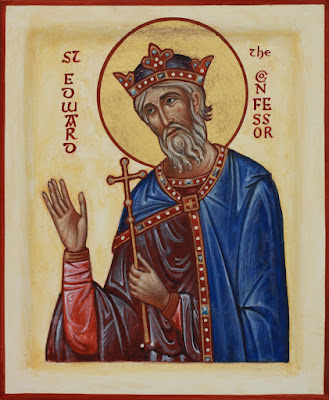 Today, October 13th, is the feast of St. Edward the Confessor, King of England from 1042 to 1066. A 'confessor' is one who suffers for the faith but is not called upon to die for it. Edward is so-called to distinguish himself from St. Edward the Martyr, the boy king whose three year reign was brutally terminated by jealous nobles in 978.

Edward was born around 1005 in Islip, Oxfordshire. His mother was Emma of Normandy and his father Edward the Martyr's infamous successor, Ethelred the Unready (978-1016). Ethelred was a weak and vacillating king. Under his disastrous stewardship, the country lay exposed to sustained and ferocious Viking attack and was eventually conquered by Canute the Dane in 1016. Edward and his mother took refuge in Normandy, remaining there until 1041 when invited to return by Hardicanute (1040-1042), Canute's son and last representative of the Danish conqueror's English dynasty.

Edward became king in 1042 upon Hardicanute's premature death. He reigned for 24 years, a long time by Anglo Saxon standards. Opinion is divided as to the merits of his reign. Some historians view him as an astute, sharp-minded ruler, while others criticise the passivity and indecisiveness that created such confusion around the succession paving the way for the William the Conquerors's seizure of the crown nine months after Edward's death.

Edward did little during the first half of his reign to endear himself to the English nobility. He surrounded himself with Norman advisers, excluding the powerful Anglo-Danish Earls from his inner circle. In 1051 a party of Norman visitors sparked a riot in Dover. Edward ordered Godwin, Earl of Wessex, to punish the English offenders. When Godwin refused, Edward sent him into exile along with his family. The following year Godwin returned at the head of an army. The Witan (the Anglo Saxon parliament) declined to support the king and Edward was forced to back down. His Norman advisers were sent home and Edward began to withdraw from public affairs, leaving the administration of the realm - including a series of wars against the Welsh - first to Godwin and then,  after his death in 1053, to his son, Harold. He focused his energies instead on the construction of a great church in the heart of London. Dedicated to St. Peter, it became known as Westminster Abbey and stands today as Edward's lasting legacy to his kingdom.

Edward, first and foremost, was a man of God. Religion was his passion and he may, in many respects, have found greater fulfilment as a monk than a king. His wife, Godwin's daughter, Edith, might have concurred. Edward had taken a vow of celibacy in his youth and this, extraordinarily, appears to have remained in place even after his marriage in 1045. He had a great reputation for holiness amongst the people, however, as illustrated in this legend. Edward, it is said, was riding one day to a chapel dedicated to St. John the Evangelist when a beggar asked for alms. Edward had no money with him so he took off his ring and gave it to the man instead. A few years later, in the summer of 1065, two English pilgrims were travelling through the Holy Land and became stranded. They were helped by an old man who told him he was St. John the Evangelist. He was carrying the ring Edward had given to the beggar some years previously. He asked the pilgrims to return it to the king, telling him that in six months time he would meet St. John in Heaven.

Edward was also believed to have been blessed with the gift of healing. He began the royal custom of touching sick people to cure them, a tradition which continued for nearly 700 years until the advent of George I in 1714. In Shakespeare's Macbeth, written some 550 years after Edward's reign, we see this exact property discussed by Malcolm and Macduff as they plot their return to Scotland from the safe harbour of Edward's court:

MALCOLM:
Comes the king forth, I pray you?

DOCTOR:
Ay, sir; there are a crew of wretched souls
That stay his cure: their malady convinces
The great assay of art; but at his touch -
Such sanctity hath heaven given his hand -
They presently amend.

MALCOLM:
I thank you, doctor.

MACDUFF:
What's the disease he means?

MALCOLM:
'Tis called the evil:
A most miraculous work in this good king;
Which often, since my home-remain in England,
I have seen him do. How he solicits heaven,
Himself best knows: but stranegly-visited people,
All swoln and ulcerous, pitiful to the eye,
The mere despair of surgery, he cures,
Hanging a golden stamp about their necks,
Put on with holy prayers; and 'tis spoken,
To the succeeding royalty he leaves
The healing benediction. With this strange virtue,
He hath a heavenly gift of prophecy,
And sundry blessings hang about his throne,
That speak him full of grace. (Act IV, Scene III)

Shakespeare's perception, as always, is razor sharp here. It isn't so much what Edward did or didn't do as a political leader that counts, but the impression he made on the hearts and minds around him. Something in his person, some quality of his being, spoke to people on a deep and meaningful level, bringing a measure of healing and serenity to those he met. He exuded peace, and by his very presence made others feel close to God. The legends surrounding him grew, therefore, out of this innate spiritual radiance.

Edward was canonised in 1161 and was considered one of England's patron saints until Edward III adopted St. George in 1351. Like ourselves, he lived and acted in challenging and uncertain times. In many ways, however, our situation feels more precipitous. Contemporary England no longer knows or enjoys the protecting, nurturing shelter of a shared faith. The idea of a common good, guaranteed by the monarch, in which everyone has a stake, is fast disappearing. English society is atomised and fragmented. People are losing faith - in God, in their country, in themselves. Politics and culture grow increasingly polarised, while all manner of instability - financial, emotional, intellectual - runs amok across the land.

Let us turn to St. Edward then, today especially, that he may bless our country and pray for her inhabitants, ourselves - that our hurts may be healed, our hearts softened and our minds redirected towards that abiding Truth which animated him in his life and brought such solace and such an indelible sense of the holy to the men and women he encountered.

This is the reorientation our fractured society cries out for - a restoration and restatement of what is eternal and real - the natural pattern, order and harmony of God's creation.

Posted by John Fitzgerald at 15:38

Mr. Fitzgerald, thank you for the reminder that St. Edward the Confessor is at the heart of English spirituality and its concomitant Christian polity. He embodies the sacredness of Christian kingship. All English monarchs since have been crowned near his tomb. Implicitly he legitimizes their authority, which ultimately is not derived from the consent of the people but from the grace of God.

Anglicans would do well to venerate him. St. Edward is the content behind their raison d'être.

Providentially the iconoclastic and regicide Puritans under Oliver Cromwell never got around to erasing his shrine. The Glorious Revolution, however, did much to bury his memory by making parliament (and its diffused politics) supreme.

This is the reorientation our fractured society cries out for - a restoration and restatement of what is eternal and real - the natural pattern, order and harmony of God's creation.

St. Edward the Confessor, pray for us.

Amen. Pray for us, indeed.