Pilgrimage in search of sacred places 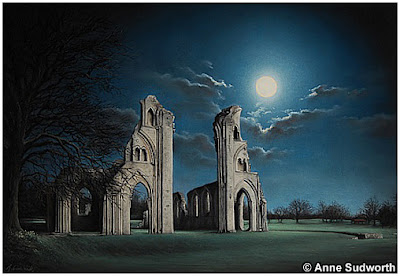 There are places which have been regarded as especially sacred - and these have sometimes become places of pilgrimage. In the past couple of hundred years, the ideas of 'sacred' and 'pilgrimage' have become... secularised, or at least expanded in their meaning.

People often undertake pilgrimage to places of national significance - such as battlefields; or to places where particular authors and artists have a connection: for example Shakespeare's birth/death-place in Stratford upon Avon is an international destination; and Wordsworth's Dove Cottage is now a museum and popular site in the Lake District.

And spiritual pilgrimage places include neolithic stone circles and burial chambers, as well as Christian cathedrals and churches.

But things have changed with respect to the long-standing places of pilgrimage; and what used to be special places (where, let us say, the veil between the material and spiritual worlds seemed thinnest) have now, in many instances, been corrupted and rendered ineffective or even counter-productive: whether by commercialisation, destruction, or ideological colonisation.

Glastonbury is a good example; since it was for a very long time (certainly many hundreds, and perhaps a few thousand, years) regarded as something like 'the holiest ground in England' - a place of religious importance from prehistoric times, site of the first Christian settlement, continuously Christain through Roman, Celtic and Saxon times into the Norman Connquest; and at times the most important abbey in England (and the tomb of King Arthur!).

Yet nowadays, in my judgement, Glastonbury has been substantially corrupted by the anti-Christian New Age movement, which is itself increasingly corrupted by commercialism and an exploitative attitude. The current legends of Glastonbury downplay almost to the point of denial that it is essentially a Christian site - and there is no significant living Christian presence in the town except for the ruins of the vast Abbey.

Perhaps the major US site of spiritual pilgrimage is Concord, Massachusetts (including Walden Pond) - home of Ralph Waldo Emerson, Henry Thoreau, Nathaniel Hawthorne, and Louisa May Alcott. I have been twice, and as of 1998 it still retained much of the 19th century Transcendentalist character.

However, as I have been following the development of the place on-line and in magazines it is apparent that in Concord there has been a near-complete takeover by mainstream 'Liberal' secular perspectives - with a selective focus on issues imported from modern (pseudo-) environmentalism, civil rights, feminism and the rest of it.

This kind of thing is a characteristic of modern institutions, which are all 'converging' onto the same Establishment socio-political agenda of New Leftism, including especially the sexual revolution. Much the same happened in the USSR - where all organisations were merely variations on the theme of communism. All organisations were bureaucratised, and all the bureaucracies became linked-to and driven by the same system tax and corporate subsidies and legal coercions.

We cannot any longer avail ourselves of traditional sources of spiritual nourishment and connection. At best, we may find the spirit in the buildings and landscape of a place, rather than in the human institutions. A good example is Oxford; where the university is not merely corrupted by secular Leftism - but one of the major international sources of this blight. Yet the buildings and cityscape can inspire, and there are individuals and small groups in the place which continue to do excellent work- and provide an unofficial, underground ('catacomb') spirituality.


The consequence is that now we must find and make our own places of pilgrimage and/ or  spiritual connection. This is a spiritual Quest which each can undertake for himself.

What are we looking for in this Quest? Well, it is a combination of the place itself, and the feelings and concepts which that place evokes in us; and the positive outcome is in our primary thinking or 'final participation'.

In other words, a combination of our inner motivation and the place itself is found (by experience) to enable the emergence of our real self, and stimulate us to a mode of thinking and being which is (experientially) found to be enhanced in power and scope - spontaneously insightful and creative because coming from god-within-us.

If we embark on such a Quest, we can expect on the one hand that we will need to be motivated, active and with a correct attitude in order to get anywhere; and equally we can expect that spiritual help will be forthcoming when we will benefit from it or have need.

Such help may be in the positive and validating form of synchronicities and everyday miracles when we are on-the-right-lines; and the deterrence of 'bad luck' and blockages to progress when we are off-track.

In conclusion, there are still sacred places worthy of pilgrimage, but we will probably need to find these for ourselves, by trial-and-error - and what works for someone else may not work for you...

Thus you will probably need to find your own and personal equivalent of Glastonbury, Concord or Oxford... 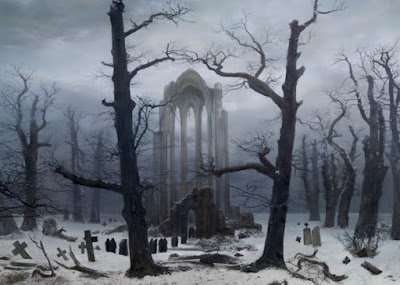 Pilgrimage has never been about the physical location of the destination but always about the spiritual aim of the pilgrim in making the journey. The physical journey is a means to impress through the senses the focus of will to pursue the spiritual transformation.

It is important that the destination be chosen with a considered and sincere belief in the value of it history and symbolism. It is impossible for a mortal mind to avoid the mental associations that are entirely obvious, one ought not make a pilgrimage to Las Vegas or some similar site where the inevitable implications are entirely contrary to the spiritual aim.

But it is also important that the pilgrimage itself be profoundly affective to the senses. To be conveyed to the chosen destination, however wonderful itself, by means that exact no effort and require no diversion of attention from your smartphone, is not a pilgrimage at all. This is in fact the very reason that formerly sacred places have become flooded with those who are not true pilgrims.

Of course, there are also those who wage intentional anti-pilgrimage, going to a place to despoil or desecrate it intentionally. And for many destinations there are those who come on disparate pilgrimages. But the enemies of a pilgrimage don't want to impress the existing significance of a site on themselves, so they usually opt for the easiest transportation, that which leaves them least impressed with the destination.

Since ancient times, one of the greatest defenses of holiness has been secrecy. A place known only to a few, or even a place seen by many of whom only a few know the significance. It is nothing new that our most sacred pilgrimages are not widely known or shared.