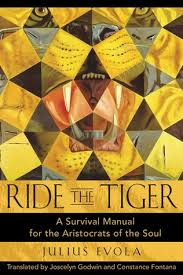 A short while ago I wrote to William and Bruce, saying that I was taking a month off from posting in order to focus on my second novel. And so I am, but no sooner had I pressed 'send' than three passages from books I have read came into my mind almost simultaneously and I judged that the ensuing train of thought might be of interest to our readers.

The first quotation is from the Italian esotericist and political thinker, Julius Evola (1898-1974). Evola is a hugely contentious figure, but it's not the purpose of this post to go into the various debates surrounding him. Let's just say that there are parts of his oeuvre which I resonate with and parts which I don't. When he hits the mark, however, he hits it in some style, as this extract from his 1961 work, Ride the Tiger shows. Evola is taking aim at the notion of Geworfenheit, an important concept for many of the mid-twentieth century existentialist philosophers. Geworfenheit basically says that human beings are propelled randomly into the world with no rhyme or reason and that we have to create whatever meaning we can from scratch as we journey through life. Evola is having none of this. Even in those dark nights of the soul when one feels that the theory must be true, those are precisely the moments when it is most profoundly false. Here is his conclusion:

Elevating oneself above that which can be understood in the light of human reason alone; reaching a high interior level and an invulnerability otherwise hard to attain: these are perhaps among the possibilities that, through adequate reactions, are offered in the cases in which the night journey allows almost nothing to be perceived of the landscape that one traverses, and in which the theory of Geworfenheit, of being absurdly 'flung' into the world and time, seems to be true.


If one can allow one's mind to dwell on a bold hypothesis - which could also be an act of faith in a higher sense - once the idea of Geworfenheit is rejected, once it is conceived that living here and now in this world has a sense, because it is always the effect of a choice and a will, one might even believe that one's own realisation of the above possibilities is the ultimate rationale and significance of a choice made by a 'being' that wanted to measure itself against a difficult challenge: that of living in a world contrary to that consistent with its nature, that is, contrary to the world of Tradition. (p.230)

This passage brought Jill Pole's encounter with Aslan at the start of C.S Lewis's, The Silver Chair immediately to my mind. Aslan is about to send Jill on her mission to Narnia from the high mountains of His own country. He warns her that her task won't be easy, gives her five signs to remember the quest by, then gives one last rousing speech before literally blowing her into Narnia:


'Stand still. In a moment I will blow. But first, remember, remember, remember the signs. Say them to yourself when you wake in the morning and when you lie down at night, and when you wake in the middle of the night. And whatever strange things may happen to you, let nothing turn your mind from following the signs. And secondly, I give you a warning. Here on the mountain I have spoken to you clearly: I will not often do so down in Narnia. Here on the mountain, the air is clear and your mind is clear; as you drop down into Narnia, the air will thicken. Take great care that it does not confuse your mind. And the signs which you have learned here will not look at all as you expect them to look when you meet them there. That is why it is so important to know them by heart, and pay no attention to appearances. Remember the signs and believe the signs. Nothing else matters. And now, daughter of Eve, farewell ... ' (p.24) 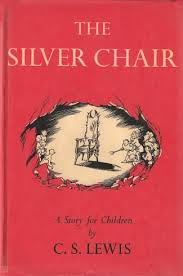 It's a tremendously comforting and uplifting thought, I feel, that whether we believe we chose the circumstances of our lives before birth (Evola) or were sent here by God (Lewis), there is a purpose to our time on Earth and that we have a high and noble calling to fulfil. The 'night journey' can be hard indeed. The air is thick, as Aslan says, and our minds are easily disorientated and confused. If it weren't for the signs imprinted on our hearts by the living God Himself then we would fall into the abyss and our time on the planet would be rendered null and void. But no, we grasp, reach out for, and cling onto a golden thread, which keeps us heading in the right direction even when our inner compass has gone to rack and ruin and we've no idea where we're going or why. It's when we're feeling scattered and bewildered - especially when we're feeling this way, in fact - all at sea and at sixes and sevens - that the golden thread shines brightest from that deep and holy place where the 'light of human reason alone' cannot go, calling us onwards and home from the secret chambers of our hearts. All we need do is remember the signs and believe the signs. Nothing else matters.

This brings us to our final passage, from The Candle of Vision (1918) by the Irish mystic, George William Russell (1867-1935), usually better known by his nom de plume, AE. Here, AE recounts a vision he experienced of a soul's triumphal return to his heavenly home:


There was a hall vaster than any cathedral, with pillars that seemed built out of living and trembling opal, or from some starry substances which shone with every colour, the colours of eve and dawn. A golden air glowed in this place, and high between the pillars were thrones which faded, glow by glow, to the end of the vast hall. On them sat the Divine Kings. They were fire-crested. I saw the crest of the dragon on one, and there was another plumed with brilliant fires that jetted forth like feathers of flame. They sat shining and starlike, mute as statues, more colossal than Egyptian images of their gods, and at the end of the hall was a higher throne on which sat one greater than the rest. A light like the sun glowed behind him. Below on the floor of the hall lay a dark figure as if in trance, and two of the Divine Kings made motions with their hands about it over head and body. I saw where their hands waved how sparkles of fire like the flashing of jewels broke out.

There rose out of that dark body a figure as tall, as glorious, as shining as those seated on the thrones. As he woke to the hall he became aware of his divine kin, and he lifted up his hands in greeting. He had returned from his pilgrimage  through darkness, but now an initiate, a master in the heavenly guild. While he gazed on them the tall golden figures from their thrones leaped up, they too with hands uplifted in greeting, and they passed from me and faded swiftly in the great glory behind the throne. (p.36)

May our own return to the Heavenly Halls be every bit as unforgettable. 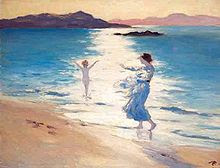 The Bathers by AE
Posted by John Fitzgerald at 02:22

Regarding Geworfenheit; I often came across this in my youth - and it was invariably presented as a kind of 'discovery' that Modern Man had made - our task being to face up to the implications.

But it is not and never was a discovery, because such things cannot be discovered - what possible 'evidence' or 'logic' could lead to such a belief?

But the failure to recognise what kind of statement was being made protected this assertion from legitimate critique.

Thanks Bruce. I'm impressed by the writer's erudition and insight.