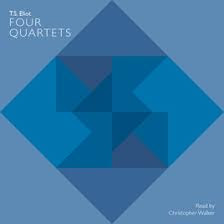 Whatever disasters and disappointments the twentieth century might have seen, the quality of poetry emanating from the British Isles throughout this time remained generally very high - W.B. Yeats, T.S. Eliot, Louis Macneice, David Jones, David Gascoyne, Kathleen Raine, Elizabeth Jennings - the list goes on. Not all twentieth century poets were as spiritually attuned as the 'magnificent seven' named above, of course, but the very existence of such a 'cloud of witnesses' during this age of philosophical materialism should surely give us cause for hope. The spirit 'bloweth where it listeth' and God will always find a way to make His presence felt, no matter how dark the epoch. Alexander Solzhenitsyn's writings on the Soviet labour camps are terrific examples of this.

There's no finer English (or Anglo-American to be precise) example, to my mind, than Eliot's Four Quartets. This sequence of interlocking poems - Burnt Norton (1936), East Coker (1940), The Dry Salvages (1941) and Little Gidding (1942) - is especially worth reflecting on at a time like the present, with storm clouds gathering and the drums of war pounding. They give comfort in a time of darkness, just as they did in the Second World War. They acknowledge the darkness too. They don't pretend it isn't there. But they're not intimidated and overmastered by it, as Denethor was by Sauron in The Lord of the Rings. Neither do they offer platitudes and facile solutions. They simply show - in rich, sonorous, almost liturgical language - how that darkness can and must be defeated.

'Things fall apart,' wrote Yeats in The Second Coming. 'The centre cannot hold.' If this stands as a pinpoint diagnosis of our current political ills, then Eliot's remedy, as set out in Four Quartets, is equally germane. It's not to fight fire with fire or lurch from one extreme to the other, tearing the fabric of society apart, as the Communists and Fascists did in the 1930s. Nor is it to look nostalgically backwards. 'We cannot revive old factions,' he writes in Little Gidding. 'We cannot restore old policies / Or follow an antique drum.' No, the way forward is a tougher, more exacting thing than that. The way through is the way down. We have to let go of our egos, our expectations, and even our belief in faith, hope and love. The waiting, and the humility that comes with waiting, is all:

The goal is the rediscovery of that centre which Yeats felt the modern world had lost. This is an inner centre - 'the still point of the turning world', as Eliot calls it - the secret, silent place where the creative logos - Christ Himself - sits enthroned in the depths of our hearts. It is a personal rather than a corporate rediscovery, based on a Dostoyevskyan recognition of the colossal importance placed on the value of each and every human soul by both God and the Devil. C.S. Lewis does something similar in The Great Divorce when he depicts the angelic powers, both good and evil, playing for the eternal future of living souls on a giant chessboard.

The way to this 'still point', for Eliot, is through a reconnection with history and place. These are the things that anchor us, that connect us to the Real, and both have been continually undermined since Four Quartets was written, and with dizzying speed since the end of the Cold War in 1991. A triumphant Liberalism has defined the greatest good imaginable as the individual's right to choose, whether as a consumer in the unfettered free market or as a 'liberated' self in the wider cultural and social sphere. 'All that is solid melts into air', said Karl Marx about capitalism, and that is one thing - perhaps the only thing - that he got right. We have slipped our moorings completely. Our roots have been cut from under us. All the things that gave us a solid, stable identity from which we could face the world in confidence and strength have been belittled and diminished - belief in God, love of one's homeland, a happy family life, meaningful work, even bodies like Trade Unions and workers guilds, which looked after the labourer and artisan, ushering him or her into something grander than the 'daily nine to five' - a lineage and tradition which gave work a wider context and meaning. Now even something usually so rock-solid as one's gender is being called into question.

None of this makes us happy or fulfilled. Quite the reverse. It leaves us feeling cut-off,  free-floating and alone, stripped of identity and our core sense of self, putty in the hands of those who would manipulate us, 'who would turn us into an automaton, a thing with one face,' as Macneice put it in Prayer Before Birth. We are told by the great and good to 'embrace globalism' and become 'citizens of everywhere', but all too often it feels like we're 'citizens of nowhere.'

Eliot would have railed mightily against all this. For him, history was everything. Past, present and future are deeply interwoven in his poetic vision. They are cut from the same cloth; all of a piece:

A people without history
Is not redeemed from time, for history is a pattern
Of timeless moments. So, while the light falls
On a winter's afternoon, in a secluded chapel
History is now and England. (Little Gidding)

History, as we see here, is intimately bound up with a sense of place. The titles of all four quartets refer to specific locales, and these are sites redolent with history. The chapel in Little Gidding, for instance, is a place where 'prayer has been valid.' Our ancestors speak to us here. The voice of tradition comes to us on this sacred, time-honoured ground:

And what the dead had no speech for, when living,
They can tell you, being dead: the communication
Of the dead is tongued with fire beyond the language of the living.
Here, the intersection of the timeless moment
Is England and nowhere. Never and always.

'With the drawing of this Love and the voice of this Calling,' writes Eliot later in Little Gidding, 'We shall not cease from exploration / And the end of all our exploring / Will be to arrive where we started / And know the place for the first time.'

The key word here is 'exploration', and this again should serve to cheer us. Rediscovering the centre is not a fixed, static affair. It's not about subscribing to a set of rules or bowing down before a 'heavenly beard.' It's a living, dynamic thing:

The inner freedom from the practical desire,
The release from action and suffering, release from the inner
And the outer compulsion, yet surrounded
By a grace of sense, a white light still and moving ... (Burnt Norton)

It's not easy to achieve though. It isn't straightforward to write or talk about either. Language has its limitations and the material world can feel like a hard, intractable place at times:

... Words strain,
Crack and sometimes break, under the burden,
Under the tension, slip, slide, perish,
Decay with imprecision, will not stay in place,
Will not stay still.

But we have to try. This is our calling - to search for meaning, to scope out a pattern, to light up the dark with whatever fire we've been given, knowing that as we do so more fire will be given to us and more light will be revealed. If we take one step forward, God takes ten towards us, because we're in a relationship with Him, not a contract, and this is what He wants from us, to become Divine as He is - what the Orthodox world calls theosis. This can give us confidence and hope when times get tough, both in our personal lives and on the world stage. We are not helpless, free-floating automatons but sons and daughters of the Most High God, whose lives and what we do with them matter every bit as much as the judgement calls of Presidents and Prime Ministers. It is only the Enemy who says that they don't. Our time here on Earth forms part of a much larger narrative which our limited minds struggle to conceive. Sometimes, as with Eliot in the rose garden in Burnt Norton, the veil is lifted and we are granted an insight into that greater story:

And the lotos rose, quietly, quietly,
The surface glittered out of heart of light ...

But it seldom lasts for long:

Then a cloud passed and the pool was empty.

It doesn't matter though. What does matter is that we do our best to follow our calling and keep scoping out those patterns. As Eliot exhorts us in The Dry Salvages, 'Not fare well, but fare forward, voyagers.' Or, in the words of Christ from the last book in the Bible, 'Behold, I make all things new.'

Posted by John Fitzgerald at 08:28

@John - This is aside from your main point, but it is interesting how the essence of poetry can be so different - our favourites don't seem to overlap at all! For me, poetry is rooted in song, the lyric - often short: my definitive anthology is Palgrave's Golden Treasury of Verse.

My 'greatest' twentieth century Eng Lang poet is a *New* Englander - Robert Frost. But among people born in the British Isles I would choose those who wrote each at least a few perfect lyrics, about which my heart holds no reservation... Houseman, De La Mare, WH Davies, Hugh MacDiarmid, Dylan Thomas, Stevie Smith, Betjeman, Larkin...

I've probably missed-out some important ones, but that gives the flavour of my personal pantheon!

It has always interested me that Eliot should be favored by people who, in most major respects, hold diametrically opposed values: Leftist academics and the spiritually earnest who lean toward Christianity. I think his appeal to the first rests in his inaccessibility. It is snob appeal. Eliot's erudition was remarkable and he made full use of it. This, alone, cuts him off from most of his posterity. The spiritually earnest, I think, find in him bits and pieces of things that resonate with their own desire for meaning beyond materialism. It has always seemed to me there is something funereal in his verse: he is always, in some way, mourning the loss of a culture whose products he valued, although he never lived in that culture, for it was long gone before he appeared in the American Midwest and went on to Harvard. Americans have little, if any, sense of history and few of us are rooted to a particular place. There is no chapel we can kneel in where "prayer had been valid." I think Eliot may represent that longing for a sense of place, a sense of belonging in the world, that we, his countrymen, so lack. Perhaps that's why he went to England and tried to forge a new identity. But I think that Providence is, in a sense, forcing us out of the world, denying us a comfortable home in it, now as never before. The poets in the 20th century were something like canaries in the coal mine: they were telling us the air of our world was no longer fit to breathe. But where else can we live? Perhaps, poetry reached its limits in Eliot, at least for now. Something new may be taking shape, but much that is decayed and cluttering the landscape will have to be cleared away somehow.