When Are We Going To Start Thinking Big About Brexit? 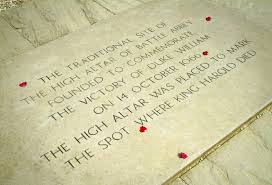 If Parliament - that bourgeois institution - neuters the People's Brexit, it will be the darkest day in our island-nation's story since the death of King Harold. The same administrative and bureaucratic elites that carried the day at Hastings will once again have licence to impose their will on a largely unwilling population. This is the antithesis of what the great defenders of our realm - from Arthur to Athelstan, and Charles I to Churchill - fought like cornered tigers to protect and preserve.

None of what I write, I hasten to add, should be read as an anti-European diatribe. Quite the reverse. This post is meant as a wake-up call. A shot across the bows. Not to let our imaginations become so narrow and constricted that we conflate European civilisation with the EU - that drab, technocratic institution which seeks to flatten down and hollow out the variety and depth of our continent's constituent parts.

Charles de Gaulle, that great enemy of barbarism and tyranny, famously called for a 'Europe of Nations', a fellowship of countries united by a shared spiritual and cultural lineage but rejoicing at the same time in the colour, individuality, quirks and idiosyncrasies that those different nations bring. The European Union in 2018 - godless, high-handed, unimaginative and philosophically incoherent - stands at the antipodes of such a generous, richly inclusive vision.

The precious soul of this blessed isle is at stake. Let's not trade it in for a mess of pottage.

Posted by John Fitzgerald at 12:09

@John - We will have 'Brexit in name only', because that was inevitable while the current, pro-EU ruling class remain in charge of the process.

I find Brexit to be a litmus test issue, because the EU is so-obviously evil in nature and intent, that wanting to leave ought to be a no-brainer. The fact that Brexit is not obviously desirable to many people is a measure of the depth of corruption, delusional insanity, of the stubborness of alignment towards evil, and of sheer cowardice, that are facts of UK public life.

Yet, at the same time, leaving the EU will achieve nothing good of substance, without a spiritual awakening first; my hope was that the majority Leave vote would trigger such an awakening - but it has not.

My impression is tha a lot of people have made a deliberate decision to embrace Hell and its value inversions; and they are not likely to repent - whatever happens - since, for them, any Good happening will be interpreted as evil, and vice versa.

(This is commonplace: the 'demons' of the Western elites are those who do or attempt some Good, even partially and in a small way. The absolute hatred of Putin and of Trump, for example, are not because these are flawed men who have done many bad things, but because they have recognisable good in them, have done some good things; and because they do not 100 percent embrace the agenda of evil. It is for their virtues, not their vices, that P & T are hated.)

I agree with Bruce, I’m afraid. The problem is even if we had a full Brexit with favourable economic terms (which the elites won’t let us have) what good would that really do us as long as we are trapped in hedonism, materialism and leftism? Brexit won’t change any of that and therefore it won’t change anything important. While it may be good and right that we reject the EU attempt to create a bureaucratic superstate with no loyalty to any higher ideal than peace and unity (there was peace and unity in soviet Russia and there probably is in hell – of a sort), if we continue to see life in the same materialistic terms we will be no better off.

The EU will want to punish us to discourage other potential breakaway nations and we no longer have a strong enough centre or sense of national identity (completely eroded over the last 30-40 years) to resist that. But maybe individuals here and there will start to wake up as this process unfolds, and that’s about the best one can hope for. Pessimistic I know but I don’t see much cause for optimism at the moment, certainly as far as the collective is concerned. Perhaps the human spirit will reassert itself but it’s been subjected to just mind-altering propaganda over several decades that won’t be easy.

@William - I would like to clarify that the 'peace and unity' apprently desired by the EU is not what you or I would call peace and unity - it is more like a situation of chronic but containable chaos and fear.

Why else would the Euro-elites enforce a hardline policy of open-ended (ie. perpetual) mass immigration - which focuses on bringing into Eurpose truly collosal quantities of people from some of the most violent and criminal societies, and setting up legal and bureaucratic systems to privilege and subsidise them by coercive extraction of respources from the native populations?

(This is a planned but dishonestly-deniable policy of aggression against the native population; akin to ancient warlord-kings importing and giving land to mercenaries to oppress the native masses. Much like the traditional account of Vortigern using Saxons to shore-up his control of the Britons. But the modern Euro-Elites would have made sure that the Britons and Saxons remains perpetually in confict, and then introduced Danes, and Normans, and Moors etc - first supporting each group until they could get a foothold; so none could become powerful and cohesive enough to threaten the overlord's evil plans for the corruption of large numbers of individual souls. It is the long-term purposively-evil nature of their plan which makes the modern Global Elite unique in history.)

This is, to say the least, Not the policy of those who genuinely desire peace and unity; but fits with the idea of making a population managemable by ensuring a war of all against all (Machiavellian 'divide and rule'), and excusing the continuation of a totalitarian society of omni-survellance and micro-control (in order to protect us from each-other).

I don't disagree Bruce which is more or less why I said that there was peace and unity in hell - of a sort.
How much of this is deliberate though and how much is stupidity, short termism (the perennial problem of democracy),sentimentality or even misplaced idealism I don't know. I suspect there's something of all this going on depending on the individual's level in the hierarchy.