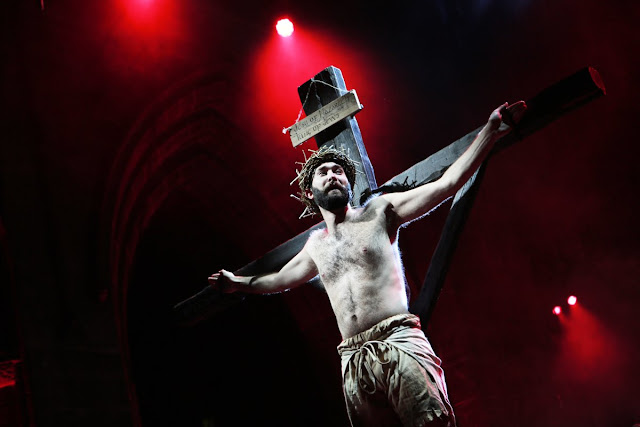 I had the good fortune to be in Chester (North West England) last week, while the Mystery Plays were being performed in the cathedral. This only happens every five years, so we took this rare opportunity.

Mystery Plays get their name from the fact that medieval Guilds or Crafts were called 'mysteries' - and these plays were performed by the various craft guilds. The plays themselves were Bible stories, or based on Bible incidents creatively interpreted and elaborated-upon.

Originally (in pre-Reformation England - the plays were suppressed by the 'puritans') there would be multiple performances of these stories at different places in the town or city; and the audience would travel from one 'segment' to another as they pleased; or else the play would be taken around various places on a cart.

There are only four surviving texts of English Mystery cycles (none complete) from York, Wakefield and Coventry, as well as Chester. These have been revived in the twentieth century, in various ways.

At Chester, they hire a professional team including writer, director, musical director, and set designer; to put together a version of the cycle each five years (because the whole surviving cycle is too long for a single performance) - however the performance itself (acting, singing, dancing, musical instruments) is done by amateurs; by 'the people' of Chester. 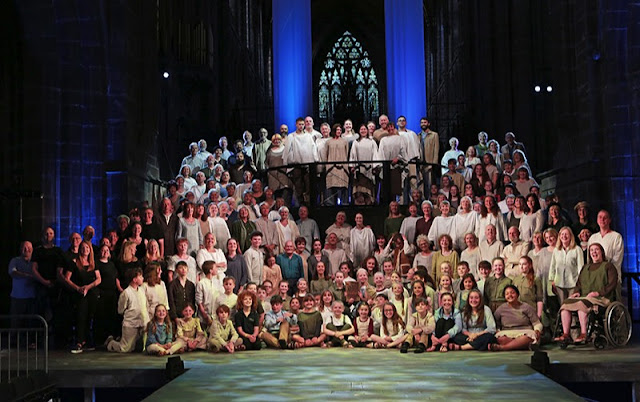 I must admit that I was not especially looking forward to the performance, for various reasons; including that I doubted my ability to sit cheerfully through nearly three hours of performance; and my trepidation that the thing would be (as so often happens) spoiled by political correctness. Then an hour before it began, I got a bad migraine, and had to take a big dose of medication...

However, from the very first moments of the production I was literally enchanted! That is - I watched it with a sense of magical delight, hardly aware of the time, enjoying whatever was happening and looking forward to whatever came next. It was undoubtedly one of the best theatrical experiences of my life.

I thought the text of the overall play - woven from 24 surviving, separate plays - was masterful in its shape, light and shade, humour, innocence and horror. The music and singing was lovely, both in choice and performance, and the staging was creative yet unfussy. The very large cast of townspeople (including lots of primary age children) was sincere, effective, open-hearted and at times emotionally powerful - in a way I don't believe could have been matched by professionals. 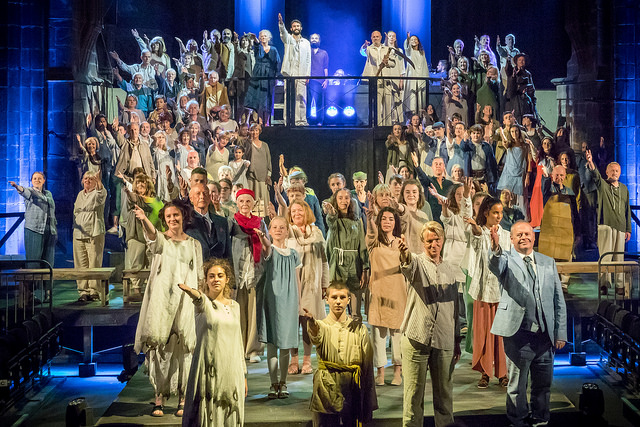 Cast acknowledging the audience - Herod the Great at the front on the right!

It should be said that - in a way that is probably authentic to the originals - the overall effect was not-particularly-Christian: it was generally theistic rather than concerned with the specifics of Christianity. Religious certainly; but theologically I suppose one would have to agree with 'the puritans' that the emphasis was distorted, and it was full of scriptural errors, factually-dubious 'apocryphal' myths, and 'heresies'...

There was also some political correctness and virtue-signalling, as is inevitable nowadays; but, so long as one could accept some of the main roles being shared between men and women (e.g. female Holy Ghost, Satan, Caiaphas, Pilate, some disciples), it was incidental rather than intrusive. 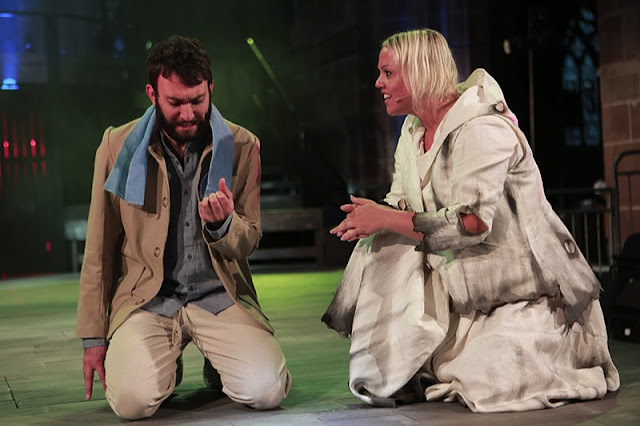 Satan tempting Jesus in the wilderness

On the other hand, there was a great deal to commend this show! Some 'moments' were very memorable and significant - Jesus, brightly lit, raising his head to be revealed to the audience for the first time; Jesus shouting at the stallholders and scattering the moneychangers in The Temple; Judas skulking off the front of the stage, pausing to be handed a noose as he passed the Cain-Antichrist figure... and then the chilling expression on Judas's face as he continued to walk off stage and towards his death...

The first half, before the interval, was the Old Testament and the events leading up to the beginning of Jesus's ministry. The depiction of the creation was one of the loveliest things I have seen; each 'day' a group of children trooped on, carrying aloft brightly coloured representations of whatever was being created - planets, banks of flowers and trees, animals... And each stage of creation was arranged in layers, building up to a complete and rich picture. 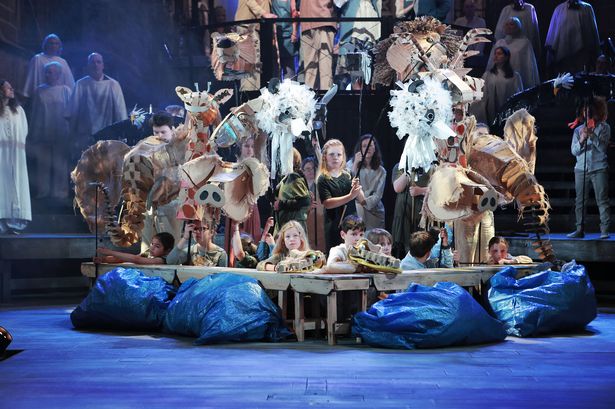 Noah's Ark - this is the most famous of Chester's mystery plays; and was made into operas by both Benjamin Britten and Stravinsky.

What was distinctive about Jesus did not particularly come across - he was mostly portrayed in terms of being a miracle worker, and troublesome to the authorities. There was a big emphasis on 'the Passion' with big 'parts' written-up for the 'baddies' such as Judas, Caiaphas, Pilate (who was, in fact, sympathetically portrayed), much trooping-around of Jesus from one dreadful situation to another, jeering crowds and soldiers, a gruesome-seeming actual crucifixion - including an obedient but reluctant 'Longinus' (wielder of The Spear of Destiny). (Another baddie, Herod the Great was brilliantly done as a suave and ruthless 'businessman'-type.)

Then after the crucifixion, focus on Revelations with a charismatic-sadistic Antichrist played by the same actor who had earlier portrayed Cane, and had recurred as an encourager of coercive aggression. 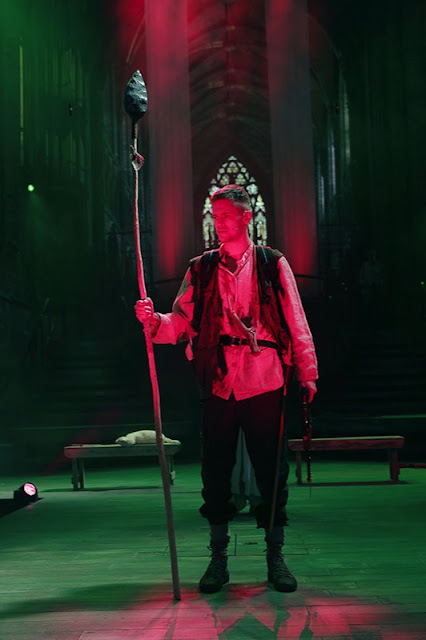 The play ends with a hair-raising Judgement; in which a mass of people approach the back of the stage and are 'sorted' into saved and damned - the saved are picked out by kindly angels, comforted and taken to an elevated place of safety; the damned are grabbed by demons and literally hurled, screaming, through the red-fiery gates back-centre-stage... these damned, shockingly, including several children. 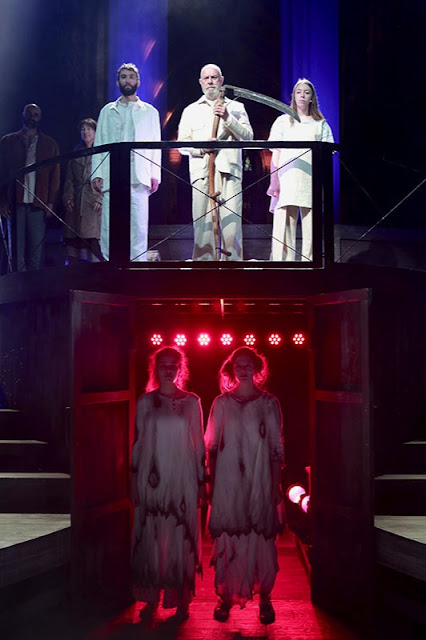 The Antichrist, however, uniquely struts arrogantly through the gates of Hell - unrepentant, proud to the last... Chilling, yet displaying courage - true to some of the most evil tyrants of history... 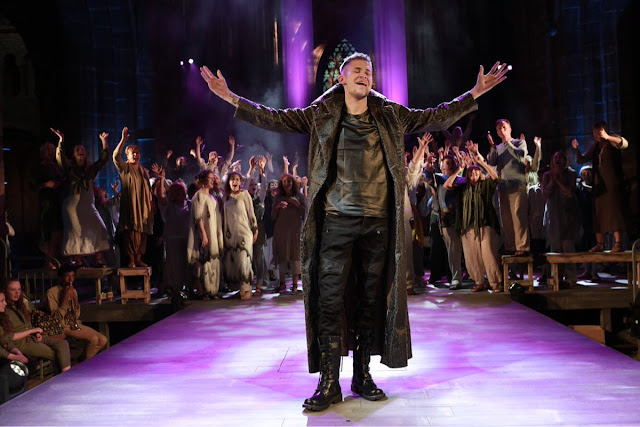 In sum; the Mystery Play format has its strength and its limitations - as is only natural. Some things can be portrayed more effectively and memorably than others - and these are not necessarily the most important things.

But certainly, I was very glad to have seen this production. I found it life-enhancing. 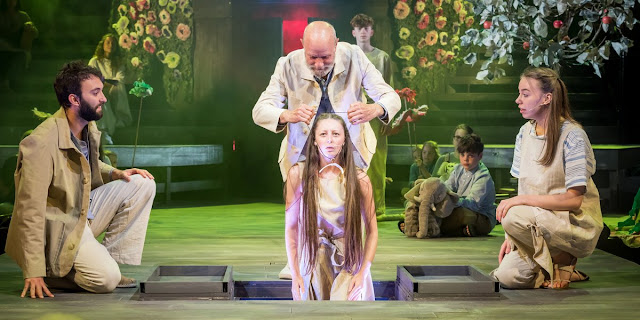 Jesus, the Father and the Holy Ghost - creating Eve using a bone from Adam, on a necklace; Adam stands behind the Father's left shoulder. And then... 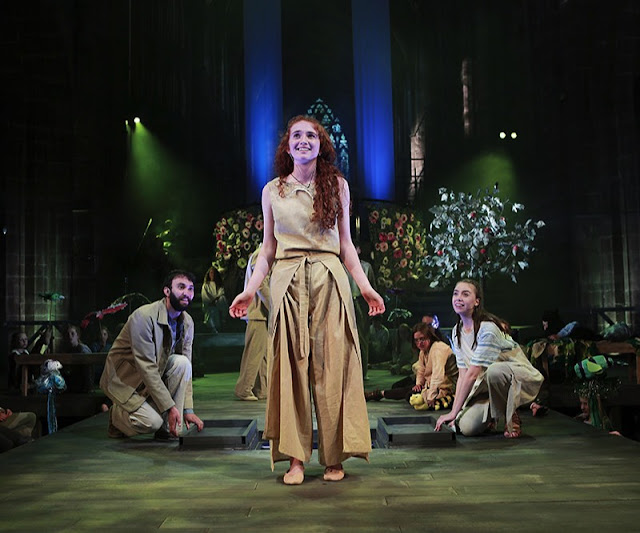 ...Eve transforms to another actress!... the magic of theatre. Presumably (these pix are from the website - https://chestermysteryplays.com) the cast rotated some roles.
Posted by Bruce Charlton at 04:41

I feel that the value of such traditions is contained mostly in the fact that they represent a continuation of tradition (which is proven as a practical way of life), rather than as infallible sources of doctrine.

However, I have no objection to the abandonment of the idea that certain scriptural figures absolutely have to be depicted as male, most notably Satan. There is an important truth hidden within Satanic sources which depict Satan (particularly those collected together in the composite called Baphomet) as having both masculine, feminine, and animal characteristics...namely that Satan is not possessed of any definitely male, female, or even human qualities.

So a female actor portraying Satan is no difficulty at all. Nor is it especially inapt to remember that grave sin may be expressed by powerful women as well as by men, the historical bias is an accident of traditional societies being typically male-dominated, and thus most (but certainly not all) of the wicked powerful enough to be notable being men. The really great sins are not essentially masculine or feminine (or even human) in character anymore than Satan is.

Other than this, I say only that I am pleased to know you were delighted (the pictures you shared are also quite nice).