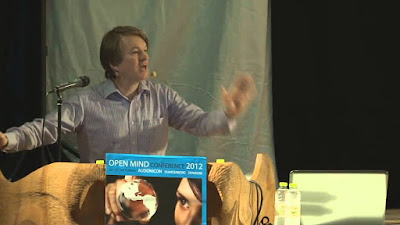 I have been engaging with the work of Terry Boardman over the past couple of years - watching videos of lectures and reading articles - many of which can be found on his personal web pages.

Boardman is an historian, translator and an anthroposophist (student, teacher and advocate of Rudolf Steiner) - a scholar of the unusual, and someone with a distinctive personal perspective.

Overall, Terry Boardman strikes me as one of the most interesting of living British thinkers, a decent and honest individual, and someone from whom geninuinely new ideas flow in abundance.

Here is a sample: some thoughts on the evolution of Western music...


After the 1914-1919 war, when Middle Europe failed to take up and apply Rudolf Steiner’s ideas of social threefolding, he pointed out that despite the trauma of the war, ingrained habits of thought were still too strong to allow people to change their thinking and align it to the needs of the new Age of Light that had begun, he said, in 1899/1900 with mankind’s crossing of the threshold of the spiritual world.

The doors of perception that were necessarily closed c. 3000 BC to enable mankind to fully incarnate into physical earth reality were now reopening. Music again was a pointer here. Classical harmony had broken down at the end of the 19th century, and in 1908/09 Arnold Schoenberg (1874-1951) composed the song cycle The Book ofthe Hanging Gardens Op. 15, the first fully atonal work.

The final breakdown of classical harmony, already prefigured in Wagner’s work (e.g. Tristan and Isolde), was a powerful symbol of the fact that man’s incarnation process of descent into the physical and mineral element of the earth culminating in the consolidation of the personal ego through the major-minor structure of harmony,based on chords built on the intervals of the prime, third and fifth, was over.

The threshold to the spiritual world had been crossed – albeit unconsciously by most of humanity; a long excarnation process would now begin with the movement from the experience of the physical world to that of the etheric world of life forces. As physics had dominated the sciences since the 16th century, now biology, which was ‘supposed to be’ the science of the living, was coming into its own, and this dissolution of the solid into something more suggestive and implicit was mirrored in western arts first in the paintings of the Impressionists and then in the evanescent music of Satie and Debussy.

But no sooner had this occurred than two opposite tendencies made themselves manifest – in Schoenberg’s atonality (1908) and Stravinsky’s Rite of Spring (1913). These two cardinal works can be said to have signalled the beginning of the falling apart of western culture into the nerve pole and the will pole respectively, a process which accelerated throughout the 20th century.

Composers like Josef Hauer (1883-1959) and Arnold Schoenberg were searching for a new music; they sensed the coming of the new era and sought a new spiritual music that would correspond to it (a “purely spiritual, supersensual music composed according to impersonal rules” – Hauer3) but they and their successors ended up creating an extremely conceptual, abstract, mathematical music that was more redolent of the silent geometry of the fixed stars than of the movements of the heavenly spheres. It failed, and still fails, to touch the hearts of most contemporaries.

At the same time, before the war, composers such as Debussy, Satie and Ravel were already experimenting with influences from black American ragtime music.

During the war, jazz made its impact in Europe, notably after the arrival of large numbers of black American soldiers in 1917-1919. This was music of will and rhythm, certainly a kind of life, as distinct from the contemplative abstraction of the music of the Second Viennese School, but the music of both these opposite poles grew rapidly in the 1920s after the war and because of the shock effect of the experience of the war on European culture, which had removed many people’s reservations in the area of tradition, culture, and sexuality.

In the 1920s many European intellectuals and educated people now fell in love with jazz and the dances that went with it. We see this kind of infatuation well portrayed in the famous dance by the false Maria in Fritz Lang’s film Metropolis (1927) and in the ecstatic reception given to the wild dances of the black American Josephine Baker in European clubs of the period.

By the 1930s what had remained only ideal conceptions of Dionysian art in the head of Friedrich Nietzsche had become willed actions on stages across the West, while in their spectacular political mass rallies and other events, the Nazis, borrowing from the Soviets, combined the Apollonian and Dionysian elements in a new, sinister political form of social ‘art’ that cut out the mind and reached directly into the feelings and will. All these ‘cultural’ developments reflected the failure of Europeans to evolve their own culture in a healthy direction in the new Age of Light; they had been knocked sideways by the catastrophe of 1914-1919.

From the 1920s onwards, as American culture, through its jazz, its dances, its crooners and, above all, its Hollywood movies, gradually took over in Europe, and western culture in general became more sexualised, black popular music increasingly pushed out traditional white European popular songs to the point where today Beyoncé, Rihanna, and Nikki Minaj and their white counterparts (Madonna, Lady Gaga, Jessie J) and imitators can be heard in most public spaces. Black American music has had an overwhelming influence on pop and rock, rap has removed much of melody in the pop world, while hip-hop and drum ’n’ bass have killed out a great deal of harmony.

The focus has been on “getting down”, as the grandfather of American funk, James Brown, would say, getting down to the root chakra, the sexual centre which has traditionally driven biological human life but which is in our time increasingly seen simply as a source of ecstatic pleasure separated from conception, pregnancy and birth, as intellectual science has steadily divorced sex from birth. The tendency to sexualise music has been overwhelmingly pushed in the direction of the European masses by commerce and the mass media, which find it useful to control people through their subconscious drives.

But what about the opposite pole, the one which proceeded from Schoenberg’s Book of the Hanging Gardens? It continues within the western modern classical tradition, though not so often played live, but where do we see this pole, the nerve pole, the thinking pole, in popular music today?... (Read the whole thing...)

Bruce, thank you for highlighting the work of this individual.

I've never met Terry Boardman but over several years of watching his lectures and reading his essays - I feel much admiration and goodwill towards him.

And I'm always excited when a new essay appears on his website - many thanks for the heads-up!