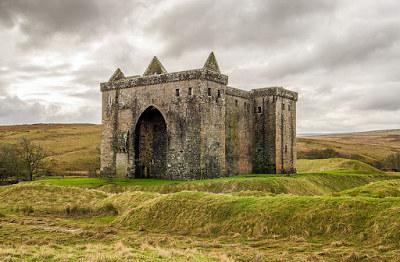 This is a bleak and neglected corner of Albion - between the lovelier Eden Valley, Lake District, Hadrian's Wall and Solway Firth - but a landscape with a special sad poetry (and featured in some of the great Border Ballads); these lands were 'debatable' because for centuries the border was disputed and uncertain - therefore neither nation could impose its sway, and the area became a nest of outlaws. 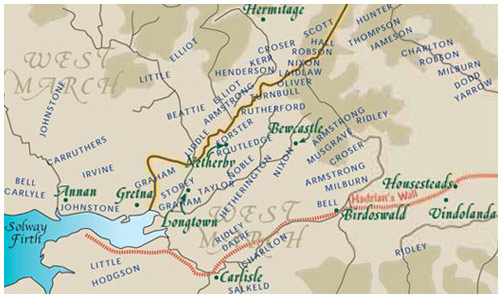 My ancestral connection with this region comes through my paternal grandmother who was a Graham and through the male line of Charltons who were in the Middle March (top right of the map above).

The Grahams were the second largest clan or 'surname', who were both Scots and English and claimed to be whatever was expedient for avoiding justice. They were, indeed, probably the worst surname in terms of theft and violent criminality (either them, or the Armstrongs) - really terrible folk even by the abominable standards of that time and place. After King James VI of Scotland became James I of Great Britain there was a serious attempt to get rid of them by extermination and deportations to the Netherlands and Ireland.

Despite massive deaths, many Grahams made their way back to the region and the surname is common. My ancestors seem to have stayed in Ulster (unless they migrated later).

It seems that over time the Grahams became respectable and well behaved - three generations ago my great grandparents were Plymouth Brethren and after that Salvation Army. And probably the most famous Graham - Billy - is known for his strict morals...

The Charltons were a score of miles over the hills from the debatable lands, but there is a link with Hermitage Castle through a character called 'the Cout of Kielder'. Different versions of the story survive - this is a good one:

The Cout of Kielder was a Charlton chieftain who had the reputation of being stronger than any other man. His Scottish rival who lived in Hermitage Castle, just across the border was Lord Soulis. When the Cout was asked to dine with Lord Soulis he was suspicious. The Brown Man of the Moors, a local seer, warned him not to go on pain of death. But the Cout accepted – confident in the strength of his arm and the sacred traditions of border hospitality. He also wore a magical armour that could be pierced by neither sword nor arrow, and a necklace of rowan berries - antidote to spells and evil spirits. But somehow Soulis came to know of the precautions – perhaps it was from the evil fairy, Robin Redcap, whom Soulis kept as an adviser. As prophesied, Soulis was treacherous and drew his sword at the table. At first Cout’s enchanted protections held, and he fought his way out of the castle to reach his horse. But as he crossed the bridge over the burn, Soulis’s trap was sprung; and the Cout was forced from his horse and into the water below by a great scrum of Soulis's men, who pinned him on the stream bed until he was drowned.

Or maybe the Cout was an unsuccessful assassin sent to get rid of the evil Soulis?

Either way, Soulis won; and Hermitage is on the Scottish side of the border - and so the Scots got to write the history of Hermitage and the Cout's grave is marked with a different story: 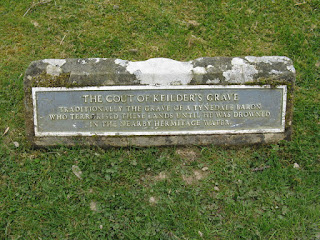 Soulis himself, unsurprisingly, came to a bad end - being boiled in molten lead (according to legend)

On a cheerier note, the village of Bewcastle (itself one of the most windswept and lonely places I have seen) boasts one of the best 'Celtic' Crosses to (mostly) survive from Anglo-Saxon times - famed for its intricate carving and runic inscriptions: 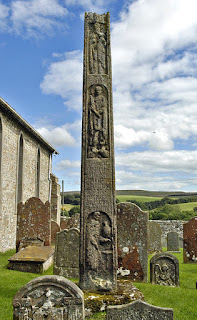 Once again, I say - what a compelling, archetypically British landscape! Land that's been deforested for millenia... we simply have nothing like it here. Positively spellbinding.