Seeing is Not believing (only direct knowing is true, potentially) 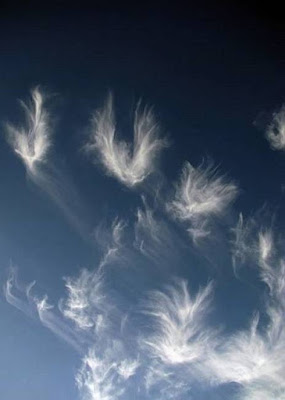 Why don't we see angels anymore, like people used to do in the past?

Well, some people do sometimes - but most people can't ever; and among those that do see angels, the results are not usually impressive, so it doesn't seem to do them any good (at least, not so as convince other people).

The idea is seeing is believing, is related more generally to the common modern belief that perception is reality; the idea that what is real is what we see, hear, touch, taste, smell - and perceiving is how we know it is real. And, if God, angels, divine things were real, then we would perceive them; and if God was real he would therefore show himself, give signs...

So modern people point at the lack of 'evidence' for God... Yet when there is the evidence of people reporting sensory contact, it is disbelieved - it is put down to hallucination, self-deception, fraud...

Indeed, people disbelieve their own perceptions, quite routinely. They believe the mass media rather than what they perceive, what they experience...

Furthermore, in science, what is perceived directly is of very little relevance - and the 'observations' are done with machines of various types, and often after very complex statistical manipulations. The validity of the machines and statistics is a matter of faith (faith that is generally misplaced).

So the situation is that people use the notion that seeing is believing to reject things that they want to reject - like God, or angels; but lack of perceptual evidence is no barrier to accepting things that are socially sanctioned (like the belief in reversible anthropogenic global warming, which has transformed all of our lives - for the worse) .

But seeing is Not believing, and perceptions are not the bottom line - we know that! We know that perceptions provide only indirect knowledge, that they are partial and distorted; and may be unique to the individual (hallucinated). We know about optimal illusions, we know that we can't see ultra-violet light but it is there, we know that colour depends on our physical makeup and can be altered by ambient light or tinted spectacles... we know that seeing is not believing - or should not be.

Indeed, we know that we are being manipulated by fake images all the time - whether in the movies or in the 'news'. If we believed what we saw, we could be made to believe anything!

Taking this further, many people are aware that most of the whole world of public discourse is manufactured. That much of what we are shown, much of what we are provided with 'evidence' for, is fake, false, manipulative. There are systematic forces at work behind the scenes to create virtual realities using images, fake evidence, false logic and so on...

All perceptually-derived knowledge is mediated - and this enables it to be manipulated.

So what should we believe? In principle, only what we directly know. Only what we know without mediation.

What we believe ought to be that we we do not perceive, for which we have zero evidence; that which is now without use of reason, logic or inference.

That which is intuited.