All system is wrong: all systems are always wrong 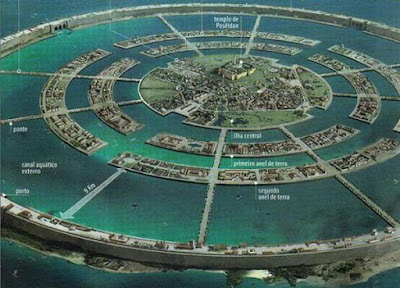 A conjectural view of Atlantis, based on Plato's descriptions

If we take as true the above insight of William Blake (some 200 years ago) then it provides the key to subsequent events, and to our current spiritual malaise...

What has built-up over the past generations since Blake is, mostly, an unconscious and implicit  rejection of The System as a whole, and indeed of all systems.

Those who oppose the current dominant system (mainstream secular Leftism, and its agents of bureaucracy and the mass media) persist in offering as 'remedy' merely alternative systems - labelled as either intrinsically-good-systems or less-bad ones.

Yet what people really, deeply, desire is the end of systems - not some (allegedly) more expedient system...

And, at root, this deep desire is perfectly correct - since all systems lead (whether fast and direct, or more slowly and via loops) to the same end-point. All systems treat individuals as components, less-than-fully human, less-than-divine - hence all systems are alienating and coercive: all systems are un-free (since system has priority, and unless coercive and un-free the system will not function).

From this perspective, literally-ALL organisations, institutions, ideologies and religions - all laws and rules and principles and procedures - all mathematics and science - are merely-systems.

Yet (of course) this world is made and sustained by systems - that is by abstract, incomplete, biased mere-models. Even our criteria of what works, what is wanted, are expressed in terms of systems...! Man creates system, and then is enslaved by it.

Confronted by apparently hopeless odds, we first become resigned to system - then we try to love what cannot be avoided: we try to love our submission, our dehumanisation - we count-our-blessings and ignore the rest; we 'focus on the positives'... we seek distraction, displacement, some combination of rationalisation and intoxication.

That is, we try to suppress consciousness, one way or another. Which happens to be the very worst thing we could do - the only certain road to self-damnation (self-damnation being the only damnation).

We strive to be happy and willing servants of evil, actively working for the imposition of greater evil - because we see no other option; yet this cannot be done, since under-all we know what we are really doing. Hence the modern malaise, hopelessness, despair - self-hatred, slow suicide, a desperate self-damnation.

What transcends system is direct knowing of reality (not a systemic representation), love that is a personal relation (and not an abstraction), and creation (which comes from the real self apprehending and participating in God's creation).

Yet, there is nothing, no actual communication, that cannot be misrepresented as merely an alternative-system - and that has been the fate of Blake, and of those other (relatively few) persons over the past couple of centuries who grasped the same insight. It is so easy to fall-into systemising!

Yet what is needed is perfectly simple it is just that state of unsystematic knowing which we passively and unknowingly experienced as children (and the human race experienced before civilisation) - yet transformed by consciousness and knowledge into something active, chosen and purposive.

That's it! - it is all quite plain, quite easy -- albeit hard/ impossible to hold-onto consistently, in face of the world.

However, Blake says, correclty, that there was is end to them; which is why/ how the modern world has become one, vast, interlinked system; and Men tending towards information processors for its maintenance and further growth - which continues unabated.

So, it is all or nothing. So, it must be nothing.

I have to say, this is a really interesting new line of thought (new at least for me anyway).

No system at all? Is that ideal? Is thinking about an ideal systematic?

Isn't the opposite to system chaos?

Does is order systematic?

Aren't some aspects of the Devine systematic?

@Ben - I am contrasting system - which we know to be wrong, because it is a (knowingly) simplified model that (we know) leaves out aspects of reality - as contrasted with reality.

One way of thinking about this might be that for God there is no system (no laws, no rules) although it has been necessary/ expedient for Men to have these at times and places - but God can and does judge each 'case' or instance individually and in context of knowledge of everything relevant (not by application of simplified rule).

The best example is Jesus in the Gospels - he always did the right thing, but what he did could not be predicted by laws/ rules or any system.

Wow Bruce this is an extremely exciting line of thinking.

In other words, we do not merely reject systems, but we constantly strive to develop our capacity for intelligent discernment and judgment such that we ultimately no longer need to rely on any system, because every system will be inferior to perfected (and thus divine) thought.

The system is a crutch for the temporary limitations of our faculty for encountering the specific individual. The valid purpose of a crutch is to eventually be able to throw it away because one can walk (and even run) without it.

And I think this view entails an evolutionary/ developmental view of human history (i.e. of hostory-as-such) - in the sense not of working-through a system in order (as happens with the late-Steiner's descriptions) but that we live In Time (in a sequential, linear unfolding-towards, propelled by persons who are the creative agents; that is a fundamental metaphysical assumption).

I have kept silent for a while, but since we've reached this point, I cannot remain silent - this is simply existentialism! Kierkegaard described this in detail over 200 years ago! He understood this, and our situation! Please, I implore you to read Kierkegaard's "Philosophical Fragments", particularly a version with a very interesting and revealing introduction by Niels Thulstrup. This is so important.

@Simon - Well, no. I was an existentialist from nearly 40 years ago. It has a good diagnosis but it led nowhere better. One must become a Christian - first.

I daresay K is good for some people, but (and I have tried several times) he leaves me stone cold, I'm afraid.

Kierkegaardian existentialism, as far as I have discovered, provides the only satisfactory starting point, as he understood and described the subjective nature of truth, and with an understanding of this, one can answer the question "How am I to determine what is true", and proceed from there.