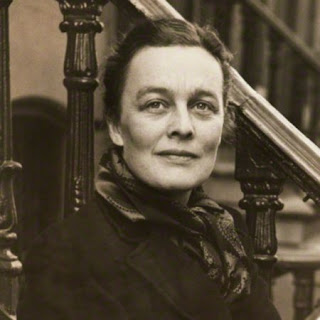 I discovered Kathleen Raine (1908-2003) in the Language and Literature Library on the top floor of Manchester's Central Library. It was December 1995 or thereabouts. I was in my mid-twenties then and am obviously a lot older now, but at least I'm still alive, unlike the Language and Literature Library, which exists now as a mere shell of its former self. The Central Library was closed for refurbishment between 2006 and 2010. When it reopened it was still the same circular city-centre landmark and a very attractive space, particularly for those with young children. But what a price to pay! The refit saw the Library lose something like two thirds of its book stock. There are computers aplenty now and lots more individual and group working spaces, but the chances of a young person wandering in and stumbling on a life-changing book have been greatly diminished. That, to my mind, represents a real loss and diminution, and seems somehow emblematic of our era's spiritual and intellectual poverty.

Technically, as I say, the Language and Literature Library still exists, but it's been reduced in size from two levels to one, and has been completely divested of its glamour and mystique. It was a very romantic and seductive place in the '80s and '90s. The lamps hung like little moons and time stood still as you perused the upper and lower levels, pausing here and there to revel in old favourites (Shakespeare, T.S. Eliot and C.S. Lewis in my case) or to make new discoveries, most notably Kathleen Raine and Colin Wilson, the subject of my next piece.

If you stayed there long enough, the spines of certain books would seem like they were speaking to you, urging you to pick them up. I had refrained for a long time in looking at the book with the golden spine and the title in red italics on the upper floor. I feared it for some reason, as if it might be some kind of Siren, luring me to a rocky and storm-tossed death. I only took it down, I remember, one evening about six o'clock when I was in a particularly desperate state of mind, adrift on the sea of life and spiritually and emotionally lost.

I took it down, opened a page at random and immediately felt, for the first time in ages, that I was breathing clear and healthy intellectual air. It was like the spell for the refreshment of the spirit that Lucy finds in the Magician's Book in The Voyage of the Dawn Treader. The book was by a woman I'd never heard of - Kathleen Raine - but it spoke to me of things that were once familiar and second-nature but that I'd somehow lost on my journey through teenagerdom and young adulthood. The book was called The Lion's Mouth and I later found out that it was the third volume of Kathleen Raine's autobiography, published in 1977.

What struck me most emphatically was the authority and confidence with which the writer expressed her vision. Jesus 'spoke with authority' says St. Mark's Gospel, and the onlookers were 'astonished.' It's a grand comparison to make but I felt much the same way, so long had it been since I had heard or read anyone talk with conviction about spiritual truth. Raine spoke of the Imagination (with a capital I) and the absolute necessity of following the promptings of her 'Daemon', a kind of guiding spirit or guardian angel, always there to orient her towards her intuition and instinct and away from the calculating rationalism of the world. For Raine, this meant placing poetry before all else, and The Lion's Mouth is unsparing in its account of how such dedication to the Daemon caused tremendous human unhappiness, for herself and those closest to her. Eliot, in Little Gidding, refers to such bitter self-realisation as:

... the rending pain of re-enactment
Of all that you have done, and been: the shame
Of things ill done and done to others harm
Which once you took for exercise of virtue.

Despite this, the poet's insistence on the existence of a higher order than that which we can touch, taste, see, feel or smell, served to inspire me. Her willingness to stake her life on it and her sheer faith in the Platonic archetypes and the multi-layered nature of reality was exactly what I needed at a time when I had lost sight of the Divine in the madness of the city, the poundings of popular culture and the pressure to do something worthwhile with my life.

I have been reading and reflecting on Kathleen Raine ever since. She is best known today, perhaps, as a poet and a scholar of William Blake, who she always regarded as her master. Her poetic oeuvre is undoubtedly fine but the nature poetry she specialised in is not quite my taste, so I'm probably not best placed to comment. Her two-volume Blake and Tradition (1965) is a masterpiece of both scholarship and spiritual insight, showing that the two need never have become mutually exclusive. In it, she debunks the materialist literary theory then gaining ground in academia and directs us towards the true sources of Blake's inspiration in Plato, Plotinus, and the hidden esoteric traditions of the West. Defending Ancient Springs (1967) is a similarly astute book, which studies a range of creative figures who, like both Raine and Blake, placed the Imagination front and centre in their lives and work - Edwin Muir, Vernon Watkins, W.B. Yeats, S.T. Coleridge, Percy Shelley, and St. John Perse.

In 1981, along with a handful of like-minded individuals, Raine founded Temenos: A Review Devoted to the Arts of the Imagination. The journal's aim was to to transform and reverse the premisses of Western civilisation, from the materialistic to the imaginative. Temenos still exists today under the title The Temenos Academy Review and its website can be viewed here - www.temenosacademy.org.

I'm not convinced, speaking plainly for a moment, that Temenos has moved in the right direction since Raine's death fourteen years ago. I have had some contact with the group and they seem disappointingly uninterested in fighting what Raine called the 'Great Battle' between darkness and light, beauty and ugliness, God and the Devil. It has become a very genteel, London-centric organisation, and reminding its 'top table' of Raine's cri de coeur, as I once did in a letter, can seem almost rude or improper, like passing the port the wrong way or hearing the vicar swear in church. But for whatever reason, the Temenos board has decided that its raison d'être is not so much 'Albion Awakening' as flying the flag of the esoteric in high academic circles. I have to respect that and acknowledge that without Temenos the British cultural landscape would be even more barren than it already is. Temenos, at its best (e.g. the Audio Archive on the website), is a real light shining in  darkness, even if at times I'm tempted to think that 'Don't Frighten the Horses' should be its motto.

I subscribed to the Temenos Academy Review for two years. The best thing I received was a book called Lighting a Candle, a collection of reminiscences of meetings with Kathleen Raine from about twenty-five people. What comes across most forcefully, reading and rereading this excellent book, is the sanctuary-like ambience of her flat at 47 Paultons Square, Chelsea. It was as if a deeper, purer air could be breathed there than elsewhere. The word 'temenos' means 'sacred space' and that is what her home was to her many visitors.

Her life and work have been a sacred precinct for me too and I hope and pray that the candle she lit will go on burning - bright and strong - even as the world grows darker and colder, so that that which is good, beautiful and true might be salvaged from the wreckage of this age, which is passing away, and sent across the sea to the shores of the Golden Age to come, a Golden Age which Kathleen Raine foresaw and did her level best to serve in word and deed as a witness and exemplar of the highest order. 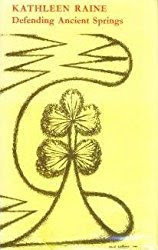 Posted by John Fitzgerald at 05:30

To speak personally; I have sampled KR and, while I found value, she does not seem to be on my wavelength.

I have also looked (more than once) at the Temenos group, and concluded that they are/ have become merely a more highbrow version of the usual 'anything but Christianity' New Age spirituality - based on inadequate subjectivist metaphysical assumptions, this-worldly, therefore necessarily therepaeutic/ hedonic in aims.

They are also have a cosmopolitan/ internationalist/ world religionist scope - which often translates as anti-English, in practice.

I am an artist working in India. I would very much like to read Kathleen Raine about Thetis Blacker's Birds of the Soul in issue 4 of Temenos and also the article on Cecil Collins. Can you advise me as to how I can get these? My email address is jyoti.inscape@gmail.com i would be very grateful for this help Jyoti Sahi