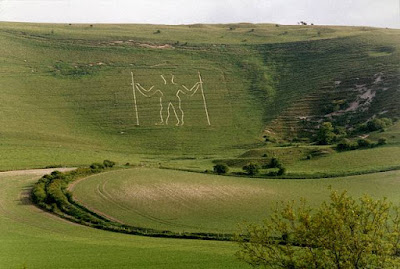 The 'Long Man' of Wilmington, in Sussex

The original inhabitants of the island of Albion - or Merlin's Enclosure, as it was first called, Merlin being the presiding deity - were a race of Giants. Indeed, the name of Albion comes from their king.

When the island was first settled by normal-sized Men (Brutus the Trojan and his followers - great grandson of Aeneas) - it was necessary to defeat resident Giant population. Gogmagog was the most famous of these - apparently a small and weak example of the race. However, a remnant of Giants continued as an occasional menace for a very long time afterwards.


Giants crop-up in many historical, religious, legendary and mythical sources, from all over the world; so there is no good reason to doubt their reality - except that we don't seem to have any nowadays. Much the same applies to the races of elves/ fairies and to dwarves - there is ample evidence for their existence in earlier time; far more evidence than for most supposed facts of history.

But of course, that does not mean that Modern Man would be able to perceive Giants, fairies or dwarfs, even if they were present - since we are self-blinded to much of the primary reality of this world; and furthermore treat as dogmatically-real many things which are imperceptible and undetectable (except by long chains of insecure and labile inferences).


Giants seem to be a member of the human genus - and perhaps even the same species, since there are many accounts of breeding between us and them - with fertile offspring. Presumably therefore, in some places (perhaps especially some parts of Britain?) some modern Men therefore have gigantic ancestry...

There is no reason why all Giants, everywhere and at all times, should be identical; but it seems that at least some were intelligent as well as strong. The great feats of building attributed to them could not have been accomplished solely by muscle-power.

The idea that giants were stupid seems like a modern slander, since they had their own long-lasting civilisations all over the place - but I suspect that were were easily tricked, and outwitted, by the normal-sized Men who replaced them. Perhaps childlike, naive and instinctive rather than idiotic.

Or perhaps some Giants were magical, and used that rather than 'technology' to perform their feats - indeed, since early man was certainly able to do magic, it seems likely that Giants were too.

How gigantic were Giants? My guess is about 12-18 feet, full-sized and full-grown - big enough to be qualitatively different from us; but not so big as to be just-plain-silly...

Giants don't, for me, have the fascination of fairies, nor the common sense imaginability of dwarves; yet perhaps they ought-to. It just needs a great storyteller or two, to help us picture and empathise-with them. 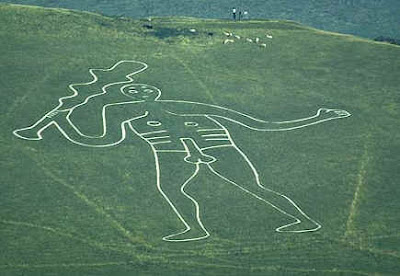 The Cerne Abbas Giant, Dorset - another impressively 'long' man! - albeit, he gained some extra 'length' a century or two ago when his umbilicus was accidentally incorporated into his phallus by over-enthusiastic turf-cutters...


(Note: Geoffrey of Monmouth had access to a now-lost book of the deep and mythic history of Albion - a book which, I imagine, would have provided almost exactly what JRR Tolkien felt was missing from his country's culture - 'a mythology for England'. Our modern Geoffrey - Geoffrey Ashe, the Greatest Living Englishman - made a really excellent job of filling this gap with his Mythology of the British Isles of 1990. Ashe uses Monmouth's book as a skeleton, fleshed out with all other available and relevant sources to provide a clear and concise mythical account at the start of each chapter, followed by scholarly commentary and footnotes. If someone extracted the mythical sections, and arranged them sequentially; when imaginatively-illustrated and published as a unity, this could make a wonderful Child's History of Albion.)

A splendid post, Bruce! I used to live near the Long Man of Wilmington (Eastbourne) and spent some time traipsing over the downs round there. I also knew the Cerne Abbas gentleman quite well from when I lived in Dorset in the late'80s but I didn't know his appendage wasn't original. That actually make shim more interesting I would say, i.e. he's not just some fertility image which is rather dull.

Regarding giants, their presence in many mythologies, particularly Norse, of course, does indicate that something is going on. I look forward to the day, though it probably won't be in this life , when the early history of humanity becomes clearer. It will be nothing like we imagine now, of that I'm certain. For one thing, I have not a shadow of doubt that civilisation goes back a lot further than we currently admit. There have been disasters that have wiped away much of the past leaving just a few witnesses like the Sphinx etc.

@William - Thanks! Glad you liked it.

It would be interesting if half a dozen giant skeletons were found somewhere at some time. That would really put the cat among the pigeons!

A creature that looks just like a known species, only much, much larger, is the sort of thing that comes naturally to the human imagination but isn't biologically very likely. An 18-foot giant (3 times normal human height) could be expected to weigh upwards of 4 tons (27 times normal human weight). A human-shaped frame would not be able to support that weight; the load-bearing bones would have to be 3 times as wide, relative to length, as those of a normal human. (See my brother's calculations here, and scale them down for the more modestly-large giants you are proposing.)

As far as I know, the largest known species of Homo is our own, and the largest known primate (Gigantopithecus) was only 9 or 10 feet high. And, while there are certainly many megalithic structures that look as if they were "built by giants," I know of no artifact that was obviously designed to be used by a giant -- no armor, furniture, hand tools, etc. that are clearly to big to be used by an ordinary human.

The biblical giants (nephilim) are identified with the "mighty men of old, men of renown" and were the offspring of the sons of God and daughters of men. This would seem to connect them with such figures as Hercules, Perseus, Achilles, and Ajax -- descendants of "Zeus" and other such gods. Ajax, at least, is described as a giant.

Giant skeletons have indeed allegedly been found from time to time, and Joseph Smith was connected with one such discovery (details here). This giant was estimated to be about 9 feet tall, which is also the reported height of Goliath, Gigantopithecus, and Bigfoot -- so perhaps 9-foot giants are likelier than the 12- to 18-foot ones you propose.

Vico writes quite a lot about giants in his New Science. His theory was that, before the Hebrews came along, the world was populated exclusively by giants. It was their filthy habits that caused them to grow to such monstrous size, and "normal"-sized people first appeared as a result of the Mosaic code of cleanliness and hygiene. (Manure makes crops grow, he reasoned, so...)

Also perhaps of note is the fact that so many accounts of the "hollow earth" (The Smoky God, for example) feature giants.

@WmJas - I agree that simply a scaled-up human is not biologically likely, maybe impossible.

Do you lend any credence to the notions of Graham Hancock?

Summarizing: He posits the existence of a Atlantean-like civilization, positioned somewhere in perhaps what are now called the Doggerlands. The comic impact which caused the https://en.wikipedia.org/wiki/Younger_Dryas#Impact_hypothesis is said to have destroyed this civilization. But the memory of it is said to be preserved globally in our shared flood stories as well as stories of magically powerful, but still corporeal and limited beings. He seems especially invested in using this as an explanation for many of the megalith structures that predate 10000 bce

@Anonymous (please use a psudonym) - I don't think I know this author's work. I have read plenty of stuff about Atlantis and (like Tolkien) find the subject fascinating, and I'm sure that there is something to the legend of a highly developed, magical, lost Ancient civilisation in The West - but I'm not sure exactly what.

"I don't think I know this author's work. I have read plenty of stuff about Atlantis and (like Tolkien) find the subject fascinating, and I'm sure that there is something to the legend of a highly developed, magical, lost Ancient civilisation in The West - but I'm not sure exactly what."

I've been sucked into Hancock's world recently and the mysteries of prehistory. I came across him through youtube, specifically several Joe Rogan interviews with Randall Carson.

Carson, among his other interests, searches for and studies the (very compelling) real world evidence for a catastrophic, all-but-worldwide flood event, likely caused by a comet impact into the ice cap at the end of the last ice age.
Hancock has for years been searching for and studying archaeological evidence and mythology that hints at the existence of a relatively advanced lost civilisation that existed during the last ice age and disappeared due to a catastrophe.
The two found each other and make quite a team. When they date the flood event (meltwater pulse 1B I think they call it in scientific circles) and the corresponding rise in sea levels to ~11500 years ago and mention that that is pretty close to the date given for the sinking of Atlantis as related by Plato... 9000 years before Solon... it's spine-tingling stuff.

Alas, poor England was under the ice cap along with quite a bit of Northern Europe before the presumed impact event.

- Were well-traveled seafarers with good mapping abilities.
- Had advanced knowledge of astronomy, farming and (mega)construction.
- Were probably Caucasian or at least fairly pale. Many of the oral histories in South America mention white skinned visitors who arrive after a catastrophe to teach morals, practical knowledge and help build things. After some time, they then return to the sea from whence they came.

When I sink into Hancock's theories, I sometimes wonder. This impact event, besides sweeping most of humanity into the sea in a Biblical fashion, caused some major global warming - warming on a scale that makes the current climate change furore over a few degrees centigrade look rather faint-hearted. This warming freed huge swathes of the North American landmass and Northern Europe from the ice. If you were the remnants of a recently landless, ocean-faring people... perhaps you may have ended up in newly thawed, empty, lands in the north...

Or perhaps the wish is father to the thought...

@Krum - I have read summaries of Hancock in one (or more) of Colin Wilson's books - Atlantis to the Sphinx, I think it was. Certainly something of this kind is plausible to me - people don't realise how much and how radically the chronology of prehistory (and of human evolution) has changed in the 50 years - even in official archaeology and science.