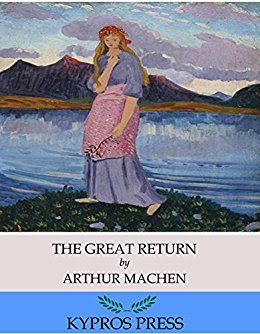 The Welsh writer and mystic, Arthur Machen (1863-1947), has become without doubt a highly influential figure. Artists as varied as H.P. Lovecraft, Jorge Luis Borges, Alan Moore, and the late Mark E Smith, creative mastermind behind Manchester post-punk pioneers, The Fall, have all claimed inspiration from him.

Machen is most widely seen these days as a purveyor of 'weird fiction', with stories like The Great God Pan and The White People viewed as early, and very unsettling, examples of the horror genre. He is also famous for his short story, The Bowmen (1914), which tells the tale of a phantom squadron of bowmen saving the British Army from destruction in France. Machen was a fine journalist, and he wrote the story in a journalistic style, which was taken as fact by many readers and gave rise to the legend of the Angels of Mons, who were said to have appeared to retreating British forces in September 1914.

Machen's most interesting books, in my view, are his novels, The Hill of Dreams (1903), The Secret Glory (1922), and the novella which is the subject of this post, The Great Return (1915). Machen's recognition of a deeper, richer reality behind the surface phenomena of daily life comes across particularly strongly in these stories. In this respect, as in others, Machen can be considered a precursor to Charles Williams. Like Williams, he was a High Anglican with a deeply mystical bent and a fascination with occult lore. His father was a clergyman, and the young Machen would have followed the same path but for a financial crisis which necessitated him leaving the family home and relocating to London to earn a meagre living through a variety of odd-jobs. Machen writes exceptionally well, as does Williams, about that city. This passage from The Three Imposters is especially reminiscent, I feel, of the perambulations around London Williams describes in War in Heaven and All Hallows' Eve:

Before me was the long suburban street, its dreary distance marked by rows of twinkling lamps, and the air was poisoned by the faint, sickly smell of burning bricks, deserted as that of Pompeii. I knew pretty well what direction to take, so I set out wearily, looking at the stretch of lamps vanishing in perspective: and as I walked street after street branched off to right and left, some far reaching, to distances that seemed endless, communicating with other systems of thoroughfare, and some mere protoplasmic streets, and ending suddenly in waste, and pits, and rubbish heaps, and fields whence the magic had departed. I have spoken of systems of thoroughfare,, and I assure you that walking alone through these silent places I felt fantasy growing on me, and some glamour of the infinite.

Machen was born in Caerleon, South-East Wales. The town's Arthurian heritage and its Romano-British ruins made a strong impression on his imagination. The Great Return is also set in Wales, in a small village on the South-West coast called Arfon. The narrator, at one stage, climbs a hill and sits among the ruins of an ancient fortification called the Old Camp Head, which looks out over the sea 'towards Cornwall and to the great depths that roll beyond Cornwall to the far ends of the world; a place where fragments of dreams - they seemed such then - might, perhaps, be gathered into the clearness of a vision.'

Machen is not a great prose stylist and his stories are often constructed in quite a clunky fashion. In my view, however, it is passages like this which show why he is so compelling and influential. There is a real sense of the British Mysteries in his writing, and he has the ability (like Williams again) to bring those mysteries alive in a memorable and evocative manner.

In The Great Return, the Holy Grail appears in Arfon, bringing healing, transformation, joy and peace to all who come into its presence. That's the plot in a nutshell. The Grail comes and the lives of men and women are transformed. Spring morning consciousness, to borrow Colin Wilson's phrase, is the order of the day. That's all there is, and at this level of spiritual and imaginative encounter, that's all there needs to be.

I think this is also how it will be at the end of time. I really do. Sure, there will be wars and revolutions, earthquakes and tsunamis, totalitarian régimes, and economic and social meltdown. We will look at all these phenomena and see them as 'signs of the times' and so they are, but they are also nothing to be afraid of. Not ultimately. Not fundamentally. In his 1945 masterpiece, The Reign of Quantity and the Signs of the Times, the French metaphysician, René Guénon (1886-1951) delineates with pinpoint accuracy the headlong erosion and inversion of values which mark the times in which we live, the final stages of the Dark Age, or Kali Yuga as Guénon calls it, following the Indian terminology. According to the Hindu doctrine of the Four Ages, which Guénon subscribed to, the Dark Age will cede place, as surely as night gives way to day, to a new Golden Age (Satya Yuga).

Our difficulty, here and now, is that we do not know how much further the Dark Age has to run. We might already be close to the nadir or, conversely, our fall - like that of Milton's Satan - may still have dizzying fathoms to come. We might conceivably have to plunge all the way down - to a self-created Hell - enslavement to an Artificial Intelligence demanding worship and obedience like the bodiless 'Head' in C.S. Lewis's, That Hideous Strength. We are not in charge of the timescales. Guénon teaches us that the Dark Age has to run its course as per the parameters set down for it at the foundation of the world. The world grows increasingly materialised until it is as far from its spiritual source as mid-winter is from mid-summer. Then the switchback occurs and the spiritual becomes once again the dominant paradigm. The transhumanists view this kind of pabulum as outmoded superstition, of course, to be outgrown at the earliest opportunity, but they have tunnel vision and are merely acting out the roles pre-ordained for them as men of the Dark Age. Their fall is as inevitable as the changing of the seasons and the rising of the sun. It will be as spectacular and comprehensive as the fall of Numenor or Atlantis.

Guénon also explains how, as we get closer to the Golden Age, some of the light from this era to come will find a way of shining into the darkness of this present time. We should remember as well, as Christians, that the Golden Age for us is not just a block of time but is in fact the coming of a Person who, like the Grail in Machen's story, brings healing, transformation, joy and peace.

The signs of His approach, as with His first advent, are likely to reveal themselves in a manner we have not anticipated and at a time and place we do not expect - a provincial backwater, not unlike Nazareth, perhaps - a place passed over and left to rot by the shifting tides of politics, finance and fashion - a run-down industrial estate, let us say, on a ring road just outside Middlesborough. People turn up for work on a Monday morning, and already by lunchtime a thousand unobtrusive miracles have taken place. Old feuds are forgotten, horizons are widened, workplace politics are recognised as irrelevant, broken families are made whole, and faces shine with light, laughter and joy. No-one knows how or why this change has happened. No-one cares either. All the workers know is that it feels good, right, natural and true. 'It's always been this way,' they say to each other. 'It could never be any other way. We just forgot it for a while.'

It wouldn't surprise me if a tremendous act of healing, bordering on resurrection, also occurred in the locality - on a nearby council estate, maybe - very similar in its details to Machen's account of the moment Olwen Phillips, a sixteen year old girl in the last stages of consumption, begins her recovery:

She said she woke up in the deep darkness, and she knew the life was fast going from her. She could not move so much as a finger, she tried to cry out, but no sound came from her lips. She felt that in another instant the whole world would fall from her—her heart was full of agony. And as the last breath was passing her lips, she heard a very faint, sweet sound, like the tinkling of a silver bell. It came from far away, from over by Ty-newydd. She forgot her agony and listened, and even then, she says, she felt the swirl of the world as it came back to her.

And the sound of the bell swelled and grew louder, and it thrilled all through her body, and the life was in it. And as the bell rang and trembled in her ears, a faint light touched the wall of her room and reddened, till the whole room was full of rosy fire. And then she saw standing before her bed three men in blood-coloured robes with shining faces. And one man held a golden bell in his hand. And the second man held up something shaped like the top of a table. It was like a great jewel, and it was of a blue colour, and there were rivers of silver and of gold running through it and flowing as quick streams flow, and there were pools in it as if violets had been poured out into water, and then it was green as the sea near the shore, and then it was the sky at night with all the stars shining, and then the sun and the moon came down and washed in it. And the third man held up high above this a cup that was like a rose on fire; "there was a great burning in it, and a dropping of blood in it, and a red cloud above it, and I saw a great secret. And I heard a voice that sang nine times, 'Glory and praise to the Conqueror of Death, to the Fountain of Life immortal.' Then the red light went from the wall, and it was all darkness, and the bell rang faint again by Capel Teilo, and then I got up and called to you."

This is the Great Return. It is also the way the world ends, not with a whimper, nor with a bang, but with a high and holy chant, the ringing of a bell, a vision of goodness and purity, and a soft, warm light which grows and swells until the whole world, from the North Pole to the South, is suffused with its radiance. The fetters of the Iron Age snap and fall asunder. The Great Restoration is at hand. The dream, as Lewis writes in The Last Battle, is ended. This is the morning.

Posted by John Fitzgerald at 22:44

@John - Enjoyed this, as always! However, my current understanding is that 'it' cannot/ will-not happen (if it does happen) in a way like "a soft, warm light which grows and swells until the whole world, from the North Pole to the South, is suffused with its radiance" - because this is a passive process, something that happens-to people rather than being actively chosen-by people. (It also tends towards a physics metaphor, whereas I think that the proper metaphor is personal/ relational.) Hence I think 'it' would be probably be selective, probably not universal.

Perhaps this piece on "The Great Return" will interest some readers: