The Last of Logres 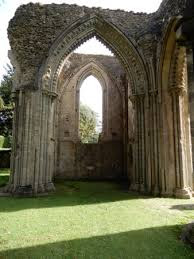 The ruins of Glastonbury Abbey

There is one particular aspect of the Arthurian mythos which, as far as I am aware, has not been reflected on as much as it should. After the Last Battle and Arthur's voyage to Avalon, a number of surviving knights join a monastic community which, in Rosemary Sutcliff's retelling, The Road to Camlann (1981), later develops into Glastonbury Abbey:

'Within half a year came Sir Blamore and Sir Bleoberis, and little by little certain others of the old lost brotherhood of the Round Table. And when in due time the ancient Archbishop died, Sir Lancelot, whom he had made a priest while he yet lived, stepped into his place and celebrated Mass for the rest as he had done and for all who chanced to pass that way.

'So they continued for seven years, living in prayer and poverty and giving their help and comfort to all who sought it; and keeping the last light of Logres alive as they kept the honey-wax candles burning on the rough altar, while the darkness flowed in over the rest of the land. For though Constantine, Duke of Cornwall and a young kinsman of Arthur, had taken the High Kingship and led his troops to battle under the dragon banner, he was not Arthur, and there was little that he could do against the Sea Wolves and the Old People from the mountains and the North.'

What is notable here is that the knights seem to intuit that the time for action is past and the time for contemplation has begun. Martha cedes place to Mary, you might say. The knights could, of course, have carried on the fight, pledging their allegiance to Constantine or forming a resistance movement in the hills. But no, they understand that fighting is behind them now and that the Round Table has served its purpose, leaving behind a glorious legend that will inspire the men and women of Albion for centuries to come. They recognise that something different is required from them, a prayerful, inner-directed counterpoint to the years of struggle and striving in the outer world. And this new orientation bears fruit in unexpected ways. After Sir Lancelot's death:

'Sir Bedivere and several of the brotherhood remained at the little church and its hermitage all the rest of their days, gathering others to them, so that at last the place became an abbey again; and later still, mighty and beautiful stone buildings arose where the little wattle church and its surrounding bothies had been. And men began to call it Glastonbury.'

The Sea Wolves sweep across the land, but the little church keeps the flame of faith alive, becoming a 'mighty and beautiful' abbey, a foretaste of the Christendom that gave us the great cathedrals which stud the land like jewels, from Carlisle to Salisbury and Canterbury to Durham. These mighty edifices - these 'sermons in stone' - are storehouses of spiritual energy, worthy successors to the stone circles of the Celtic and neolithic eras, and becoming increasingly popular. Visitor figures have been up for a while now, with Choral Evensong especially well-attended. Their finest hour may still be yet to come.

It is good to reflect upon these themes on Good Friday and Holy Saturday, two days of apparent defeat and despair. As Saturday evening in Jerusalem shades into Saturday night, nothing seems to be happening at all. There is nothing more to happen in any case. All is over, finished, consummated. Or so it appears.

But how deceptive appearances can be. Transformation is a mysterious, unquantifiable thing. Its ways are not our ways. Think of the tiny seed in Jesus's parable which grows without fanfare or headlines into the mightiest tree in the forest. This should give us hope on the micro-level too - all those occasions when we feel stuck, frustrated and shorn of inspiration. 'I've nothing to show for my life', we sometimes say, but we don't know that yet. We don't know it at all, in fact. For Jesus's followers on Holy Saturday, everything looked done and dusted, yet all the while He was setting the spirits of the dead free in Hades and breaking the power of death. The real work - Christ's Harrowing of Hell being the great archetypal example - goes on in secret and in silence. 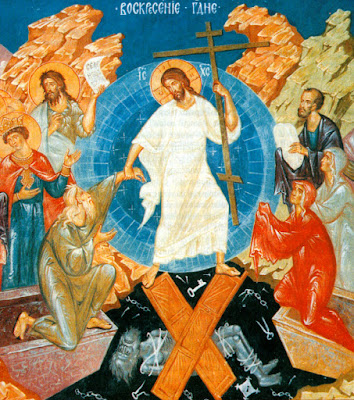 Posted by John Fitzgerald at 04:44

@John - "Carlisle to Salisbury and Canterbury to Durham. These mighty edifices - these 'sermons in stone' - are storehouses of spiritual energy"

They are indeed such storehouses. And I am grateful for that.

Yet storehouses are not enough - there needs to be active, conscious, explicit spiritual energy to set against the cumulative destructions of materialism. We now have the beautiful architecture *without* beautiful faith; whereas in the dark ages the situation was the opposite.

Increased numbers of 'visitors' are meaningless; given the massive commercialisation of the cathedrals who now employ marketing and managements teams with advertising budgets, have had large injections of state subsidies, now provide lavish shops and cafes etc.

I am more spiritually impressed by the little groups of a few dozen serious Christians who tithe money to rent a couple of rooms and pay a pastor to teach and care for them; than by the organised absorption of cathedrals into The Bureaucracy (with the usual strings attached, of course).

The great cathedrals are nowadays like defensive castles that have been captured by the enemy and are deployed against the hopes of their builders - and cause more spiritual harm than they do good (although they do continue to do good) - like all modern bureaucracies.

Like you I still visit them, and extract nourishment; but I am aware that this is movement against the tide.

Still at present in Albion almost all of our values are locked-up in the stones, some landscapes, and some special places. They are pretty much all we have - and they are only allowed to remain because they are 'mute' - which adds to the poignancy.

Yes, fair point Bruce and very true. It's the fact that people these days seem drawn to the cathedrals that interests me. How they're run is almost immaterial. One pretty much expects they'll be run badly, just like every other institution. But there's something about them that speaks to people on a really deep level. 'Management teams' come and go like so much froth but I don't think the builders' holy aims can be thwarted so easily. The stones still sing. They resonate with hearts and minds, and the fact that they still do so is, I believe, a cause for hope if not yet celebration!