Agnostics are (even) worse than atheists 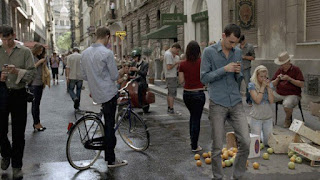 "I have more important things to do than philosophize about the so-called 'meaning of life'..."

Atheism is the wrong answer to the question of whether this is a purposively created reality; but agnosticism is a refusal to acknowledge that this is even an important question.

The response of agnosticism has arisen from a long term strategy of false-framing (excused-by, but not truly derived-from science) that such matters must be settled by 'evidence'; then, having made that assumption but denying that it is an assumption, to discover that evidence can never, under any possible circumstances, settle the question.

This public philosophy which frames our discourse and thinking is a type of scientism/ materialism/ positivism. It is implicitly but firmly based on the self-refuting assumption that the only valid knowledge is scientistic, and that (n effect) science proves science - and that assumption is stated to be an end to the discussion...

And then - without re-examining the assumptions that led to the nonsensical impossibility, to decide that the question cannot ever be settled - and is therefore unimportant. Thus to adopt indifference as a philosophy of life.

The assumption of a professed agnostic is that it does not make any difference whether this world is created or accidental. It is to say that my life might, on the one hand, be a crucial part of the vast plan of reality; or, on the other hand, my existence might be of zero significance to anybody but myself, and that briefly. And that which of these is something I cannot know. And so I do not want to waste time considering the matter.

Assuming that sceintistic, materialistic assumptions must-be true and discussion is futile is a fanatical commitment to the fact that these assumptions are true

To be an atheist is to introduce some precision to one's claims about the triviality of life; and to leave the matter open to further analysis. The atheist opens-himself to a demand to explan how he knows that God does not exist, that reality is meaningless. There is a possibility that an honest, rigorous atheist may come to realise his error.

Because if Life cannot be known as purposive, meaningful and personally-relevant; then Life just-is trivial.

A growing number of atheists claim to be "agnostic atheists" these days. The reason has nothing to do with belief or knowledge but rather self-serving expediency. This compound descriptor is used to shield from accusations of being non-scientific - which is their greatest fear.

Even Dawkins rates his disbelief as a 7.9 out of 8. It is tremendously important for them to allow room for this token agnosticism, which affords them the "fully comp" coverage from incoming critique.

I do think it's possible that there are some true agnostics in the world, but like the May Fly they are doomed to an ephemeral state of existence before the inevitable swing to atheism.

There are a lesser known group called "ignostics", who seem to be the perfect candidates for your criticisms here. I think a great many atheists are actually ignostics. They find the whole "Question of Life" so trivial that they refuse to even discuss it seriously without first establishing exact terms for the debate - which they know is impossible.

I myself doubt whether anyone who really was entirely indifferent to the question of whether life has any meaning at all would have a motive to actually evade the question.

I myself don't. Why bother to evade the question of whether life has any meaning if I don't actually care either way?

But that's precisely because the possibility that life has meaning is the only possible basis for preferring to spend time on any of the issues that arise as a result of life having meaning. That is to say, if life is unimportant, than exactly where will you find something else of any importance, let alone more importance?

The triviality or unimportance of a question is only a reason to avoid it if there is some difference between the importances of questions such that you could be missing an important question by wasting time on an unimportant one. But the unimportance of the meaning of life erases any possible importance from all questions that arise in life experience.

So I think that it is probable that most agnostics are simply lying. They don't really believe that it is impossible to find out what life is about. Otherwise they would hardly hesitate to devote their time to such a 'futile' pursuit even at the expense of their survival, which is just as futile, and known to be so.

What they believe is that they can get a pass on the question by pretending they didn't consider it.

Like keeping your job by always claiming to not have known what you were supposed to be doing.

Which to me seems hilariously unlikely.