The visionary and the apotheosis of desire 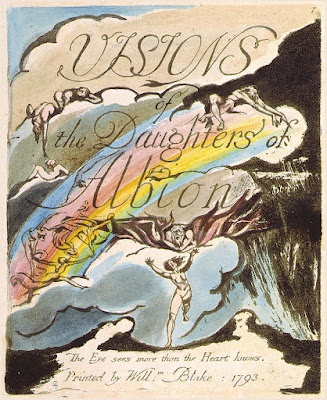 Nearly all of us have felt, at least in childhood, that if we imagine that a thing is so; it therefore either is so, or can be made to become so.

All of us have to learn that this almost never happens, or happens only in very limited ways.

But the visionary, like the child, continues to believe that it always ought to happen.

We are so possessed with the idea of the duty of acceptance, that we are inclined to forget our mental birthright; and prudent and sensible people encourage us in this.

That is why Blake is so full of aphorisms like 'If the fool would persist in his folly he would become wise'.

From Fearful Symmetry: a study of William Blake, by Northrop Frye (1949)


Note: What a wonderful passage! It shows that our task (from where we are, here and now) is to become 'visionaries', like Blake was a visionary - in order that our true imaginations may 'happen'.

This is, of course, Romantic Christianity; by one of its originators.

Yet we must not be misled into equating being a visionary with being a great poet or artist. Being a visionary is about our own imagination and thinking; not about successful communication of that vision to other people.

A Man might be as great a visionary as Blake, yet never communicate the fact - except perhaps by indirect implication to those with whom he had honest discourse. What makes the visionary is 'the vision' - not a poem, painting, sculpture or novel about that vision.

We may be educated or inspired by Blake, or someone else, into developing into a visionary; but the 'job' is not restricted to the talented.

It is indeed intended that all modern Western Men become visionaries, prophets and seers - like Blake's inner life.

And we will then discover that the inner world of imagination is the same as the universal world of reality; that we thereby participate in divine creation; and that when we really imagine something is so, it really becomes so.

Note: It may be objected that mainstream modern beliefs are false, and indeed incoherent; yet further reflection shows that these are not beliefs but merely assertions - since they are 'based-on' the metaphysical denial of the possibility of truth - i.e. the basic assumption that there is no objective, universal and personal human meaning or purpose to reality. For mainstream modernity, belief is merely assertion - and, of course, assertions need not be true. But real belief is true, necessarily.
Posted by Bruce Charlton at 06:10

the necessary corollary is that not all men are visionaries simply by having the ordinary kind of imagination. What distinguishes a visionary is that the imaginings of the visionary are possible. And that what is possible is imagined.

A visionary thus does not imagine anything without also imagining the sequence of intermediate events (each imagined because they are possible) that lead to the utmost imagination.

It is by a faculty for imagining the possible that a visionary imagines further possibilities, in contrast with the feckless who only imagine some presumed result without having imagined any real possibility that leads to such an outcome.

@CCL - Imagination of this kind is active rather than passive - and it turns-out that the active imagination is necessarily real (if we try actively to imagine some merely passive and self-gratifying fantasy, it cannot happen).