Who was the real-life Doctor Who? 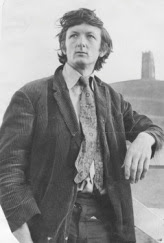 The Tardis is in the background, on Glastonbury Tor...

There is an answer to this question, you may be surprised to hear - and the name is well known to this blog's readers - The Doctor was John Michell (1933-2009).

As well as looking much like the Doctor's third incarnation (as played by John Pertwee) - he simply was The Doctor in his life; down to the smallest detail (including a sequence of attractive female companions) - as can be seen in the mini-biography by Paul Screeton (John Michell: From Atlantis to Avalon), or the collection of memoirs in the Fortean Times.

Michell was himself a Time Traveller; as is made clear from all of his writings - but especially a little known short story called 1850 BC Revisited, written in 1968 and republished in Screeton's book; in which the Doctor is renamed The Reader; which I excerpt here:...

One day the Reader was in the library looking through an old Somerset guide book, illustrated by photographs, taken some fifty years earlier. They showed scenes and landscape, all quite familiar; yet somehow familiar, somehow alien.

Suddenly he understood the solution. Photography is such a recent development that no one has yet become conscious of the remarkable difference in colour, light, tone and atmosphere between a Victorian landscape and a similar view photographed today.

Every age, the Reader perceived, has its characteristic visual aspect in the same way as it has its own peculiar note, detectable in the prevailing harmony of its desirable period; analysing its various qualities from the evidence of surviving objects, poetry and traditions; recreating for a moment the conditions of that time, and stepping inside...

Mythology, he realized, takes place not only in the past, but also in the future in accordance with certain almost recurring cycles. The psychic conditions that prevailed at the time of the Reader's experiment were sufficiently close to those of 1850 BC to justify his selection of that year as the object of his attempt.

(The Reader then goes to ? Glastonbury Tor at the correct time on the correct day)... surrounded by his various instruments, his mirror, tinted spectacles, harp, amulets and bags of poppy seeds; together with the spear and arrowheads stolen without difficulty from a local museum.

He sat entranced, absorbed in the subtle movements of the ether, that first surrounded and pervaded his body. The setting sun stood for an instant poised on a far mountain peak, like a balloon on a pin. The Reader struck his harp and cried out.

The Sun disappeared, the Reader also...