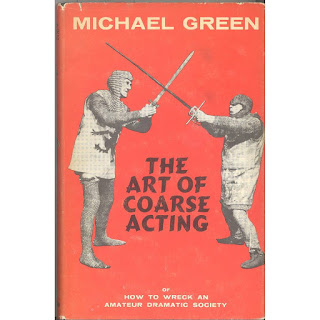 I was introduced to the work of Michael Green as a teenager by my best friend - who had a copy of The Art of Coarse Acting; relevant because we had both recently begun performing in school plays. In trying to read bits aloud to each other, we found Coarse Acting so extremely funny that we became unable to speak, cried tears of laughter, and were intermittently unable to remain standing.

I have since gifted or lent this volume to many other amateur, and amateur-ish, actors - and it still commands a small but intense cult following. There are several other 'Art of coarse...' books, but this has always been my favourite. I would rate it as one of the genial classics of English humour - a rank below the likes of Diary of a Nobody, or Three Men in a Boat - but well worthwhile.

It comes from a lost era and an almost obliterated class - the post-war austerity days and the lower middle class of grammar school kids who did not go to university; served as NCOs in the second world war; worked in semi-professions such as Civil Service offices, as journalist, school teachers and the like; and who had a very active and communal social life in hobbies and sports - forming rugby and cricket teams, and putting on plays (even Shakespeare!) with their workmates.

Michael Green had an easy writing style, a likeable authorial personality, and an accessible kind of exaggerated-anecdotal humour.

Among his other books I best liked Squire Haggard's Journal, which was a a tremendously energetic and fluent pastiche dairy of an (imaginary) lecherous and drunken 18th century country gentlemen (of the kind to be found in Henry Fielding's novels).

And his two volumes of autobiography The boy who shot down an airship (about childhood), and Nobody hurt in small earthquake (about young adulthood - especially as a journalist) - which are  charming, honest and well observed - as well as often amusing.