Between 1985 and 1988 I lived in Bridport in the county of Dorset, during which time I worked 15 miles down the road in Dorchester at the Dorset County Museum. Dorchester and the area around it are interesting in that this is a region which has been continuously populated since at least Neolithic times, and by cultures that have left their mark. There are not many parts of the country you could say that about.

My job at the museum was to sort through the enormous amount of material that existed in the museum's archives, mostly the result of archaeological digs over the previous decades. This included Stone Age axes, pounders and arrowheads, Bronze Age jars and pottery, Roman glass and ceramics (usually broken which is why it was stored and not actually exhibited), mosaic tesserae and medieval monastery tiles, often beautifully decorated. There were even around thirty large boxes of oyster shells going back to Roman times, all lovingly catalogued and kept on shelves in the deconsecrated All Saints Church on the High Street just down the road from the main museum. Experts could tell weather patterns of the time by examining the shells, of which there were so many because oysters had been a staple food back then. I learnt on the job and it was fascinating to handle all these artifacts and find out their history, together with the ancient history of the area in which they had originated.

There are several earthworks in the area, of which Maiden Castle is the most famous. This is an Iron Age Hill fort though archaeological digs have shown that the site has seen human activity going back almost 6,000 years when there was a Neolithic causewayed enclosure there consisting of an oval area surrounded by two ditches. We will come back to that in a minute. 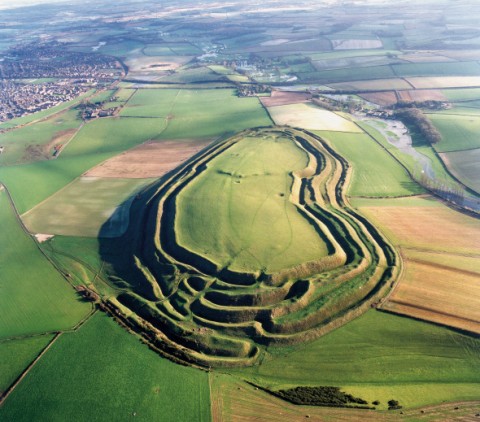 During this period it is probable that the site would have been of religious significance since for human beings at this time life was essentially religious. They lived in much deeper communion with nature and their gods than we can imagine. I believe that faith would not have been a major part of their spiritual life. It did not need to be since their consciousness was open to spiritual reality, though largely in a passive sense. They experienced a kind of primeval identification with their environment, both physical and psychic.

Later on in Iron Age times, this form of interaction with the landscape and the spirit world had begun to fade away. The site, perfectly positioned for defensive purposes, became a hill fort, one of over 100 built at that time in the West Country. But this one was expanded over the years until it became the biggest in Britain and one of the biggest in Europe. Walking on the springy turf up there still has the power to take one back in imagination to a distant past when human beings lived lives tied to the land and the cycles of nature, and had not fully separated themselves from their environment. At least, it does if you can respond to that sort of thing and have not, like so many people have, spiritually "dumbed yourself down".

There is another earthwork actually in the town and I would occasionally go there during my lunch break just to sit and absorb the peaceful atmosphere. This is Maumbury Rings, a Neolithic henge. Here's an aerial photograph. 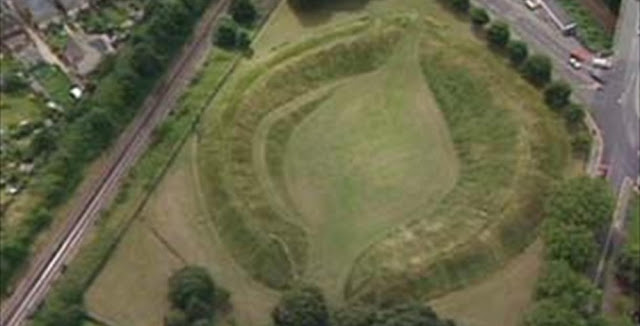 We have returned to the oval area enclosed by a ditch. That is to say, there would originally have been a ditch, formed by the construction of the outer banks, but that has long since been filled in. But still the basic layout of an oval demarcated by a border remains. Now, forgive me, but what does this remind you of? All I can say is that I have to assume it was constructed as a sacred space dedicated to the Mother Goddess. In its time it's been a Roman amphitheatre, a fort in the Civil War and even an execution ground in the 18th century during the Monmouth Rebellion, not to mention farmland and a place of assembly. But it is over 4,000 years old and its original purpose would have been religious. Archaeologists frequently say of ancient things when they are not sure what they are for, "used for ritual purposes" and I expect they are often right in that, but this clearly was a sacred space used by the local tribe for their most profound encounters with the numinous. When I used to go there 30 odd years ago it still had a feeling of peace and stillness, and there was also a sense of being safe and secure. Is it too fanciful to think of it as a kind of spiritual womb? Rites of death and rebirth are among the oldest and most widespread forms of human spiritual activity, and I think that is what Maumbury Rings would originally have been associated with.

England has one of the highest proportion of prehistoric sites in the world, and many of them retain an atmosphere that links to their past. If you approach them with an open imagination, you can, to an extent, 'tune in' to the consciousness of our ancestors, and if you manage to do that you will find that our modern view of the world is really very limited. Obviously, no one is suggesting that we should, even if we could which we can't, return to that mode of being, but we can certainly learn from it and seek to incorporate it in our own modern consciousness insofar as that is possible. What we have lost in the sense of identification with the natural and spiritual environments can be recovered but in a higher form in which we are no longer simply passive experiencers but can become creative participators in a spiritual world that extends beyond this one yet is fully enmeshed with it. But the world is a creation and we can only really achieve the kind of spiritually conscious interaction with it I am talking about when we acknowledge that, which means acknowledge the Creator. For creation, and that includes ourselves, is only properly understood when we see it in the light of God of whom it is the expression.

Posted by William Wildblood at 07:49

To see ourselves both as individual and as part of the continuum of creation is the vision of Christianity. To hold the two in balance and not slide lopsidedly into one to the detriment of the other is the challenge we face. We have to learn to love the particular with a love that is universal, if that makes sense. Many in our time would like to return to Mother Nature, to the hazy group soul of the past. But this cannot be done, no matter how many magic mushrooms you eat or how worshipful of the environment you become. There is also a renunciation of individualism in the form of a new tribalism which is pseudo-religious: one retreats, not into the womb of the Mother Goddess, but into a group identified by its sexual or racial or political orientation. Actions are no longer regarded as personal but as the expression of one's group soul, if your will, e.g. white privilege, etc. Nicodemus asked Christ how a man can be born again, how can he go into his mother's womb a second time? Of course, he cannot. He can only be born from above, of water and the Holy Spirit. Water, according to one vision, represents human birth, issuing from the physical womb, and the Holy Spirit, the growth of the ego, of the "I am" that helps us emerge from the womb of the group soul into the light of Christ, as free men and women.

Yes. It is one thing to appreciate the spiritual consciousness of the past and to see its beauty in its own time and place but quite another to try to fall back into it. Just as it would be an error to try to go back to one's childhood, however golden that might have been. At the same time, it's a sorry and spiritually crippled adult who has forgotten his childhood and the magic experienced then in the spring of lifetime. Balanced growth moves forwards, building on the past, neither rejecting it nor retreating to it.