The Long Man of Wilmington

When I was about 10 years old I went on a school trip which remained in my memory long afterwards as a very enjoyable time even though I couldn't remember much specific about it. I knew it was somewhere on the south coast of England but had forgotten exactly where though I did remember the highlight of the trip being an excursion in which we had walked across grassy downs on a bright sunny day, blue sky above, birds singing in an English morning, suddenly to discover at our feet a massive chalk figure carved into the hillside. The teacher had wanted to surprise us and he did. I knew the figure was of a man holding what appeared to be sticks in each hand, but it was one of those indistinct childhood memories that have receded so far into the past that they have become almost dreamlike. Nonetheless, the impression of having encountered something otherworldly stuck with me and the sight of this enigmatic figure awoke my imagination to the deep, ancient past of this island.

Fast forward thirty odd years and I was living in the Sussex town of Eastbourne. One day I was talking to someone who asked me if I'd seen the nearby Long Man of Wilmington yet. I'd heard of it but not realised it was in the vicinity. It turned out to be about 6 miles away so off I went to have a look. There was the figure of my childhood. 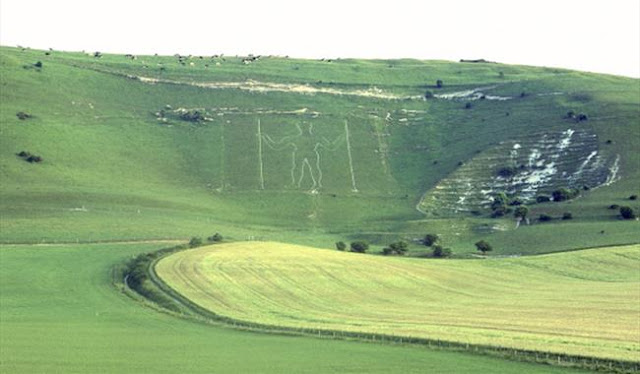 This is how he appears when seen more or less from the road. He is standing facing forwards though his feet are set sideways. He is depicted in outline with no features which makes him appear more archetypal than individual. It also gives him the air of mystery I noted when I first saw him as a child, an air that his companion in Dorset, the Cerne Abbas giant, does not have though that is for other reasons too. He conveys an impression of watchfulness and seems almost like a guardian so it is no wonder some people have speculated that he stands at the door of the underworld (not hell but a spiritual realm beyond this earthly one), guarding the threshold from unworthy intruders. The fact that he is positioned on the side of a hill emphasises this even though that was undoubtedly more for reasons of display since, as far as I am aware, all English chalk figures are on hillsides, making them visible to more than the birds. But still, this gives the impression of a gateway into somewhere beyond this mortal world.

What are those things in his hands? Are they sticks or staves, symbols of his office perhaps or the remains of what were once agricultural tools, or are they the sides of a doorway, the gate he guards as he blocks the entrance to the next world with power and authority for he does indeed embody those qualities, his muscular frame and bold stance telling us that, if we are not entitled to pass, we shall not pass.

The Long Man is 235 feet tall which makes him the largest representation of the human figure in Europe. It was once assumed that he came from the Neolithic or Iron Age (there is a long barrow nearby), probably representing a pagan deity, but it turns out that there is no documentary evidence for him from before the 18th century, and the general consensus now is that he goes back no further than the 16th or 17th centuries. But if he does who or what is he supposed to be? He used to be known as the Green Man because that was how he appeared before a 19th century restoration embedded chalk into his outline, for though he is carved into a chalk hill, the soil on top of the chalk is relatively deep. This name, of course, also links him with the old pagan religion. 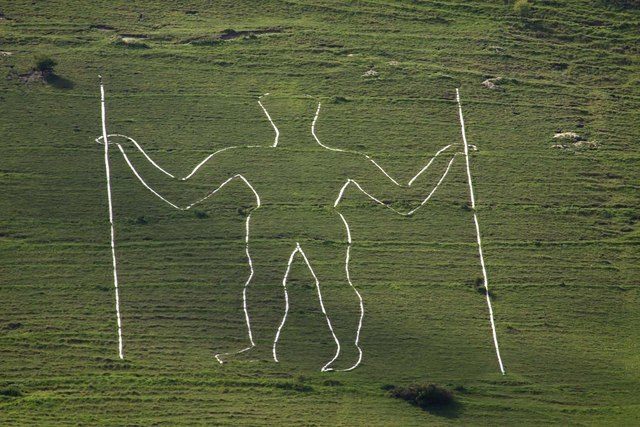 Maybe he is no more than a few hundred years old, but he surely reaches back to something much earlier. For me, the idea of him as some kind of guardian of the land makes the most intuitive sense since, even if this was not his original role, it is what he has become. I am tempted to speculate that he might even be a representation of Albion himself, a giant carved in the white earth on the southern shores of England protecting the land from invaders, but also welcoming people as he stands at the entrance to England. My feeling when I first saw him as a child was he did have something sacred about him, something that is linked to the land of which he is a part. Could it be that he was always there on the ground but sleeping until the 16th or 17th century when he was not created so much as woken up? This time period does, after all, coincide with the rise of British power, albeit material not spiritual power. Perhaps this means he is still only half awake (the lack of facial features supporting this idea) and we await his true rising.

If you are looking for a depiction of Albion, here is one as good as any.

Posted by William Wildblood at 05:40

@William - Excellent post. Some of the chalk figures are extremely powerful - but I have direct experience only of a dim memory of the Cerne Abbas Giant, and the Uffinton white 'horse' https://charltonteaching.blogspot.com/2014/09/the-neolithic-high-civilization-of.html - the picture was taken on the day when my family spent half an hour refreshing-repairing the horse's neck, by hammering chalk into the surface.

I found this date for the Long Man of middle 1500s by the OSL method (which dates the Uffington horse at 1000 BC). http://www.hows.org.uk/personal/hillfigs/lmw/lmw.htm

But I have seen the dates of ancient features revised many times over recent decades - almost always pushing them back, and sometimes a long way back (eg the Uffington horse date was pushed back more than 1500 years; a 'hill fort near where I live was pushed back 3000 years - from Iron age to Neolithic - within the past decade!). I feel pretty sure that the Long Man has - one way or another, perhaps as a replica/ replacement of an earlier figure - very deep roots in the soul of Albion.

"I feel pretty sure that the Long Man has - one way or another, perhaps as a replica/ replacement of an earlier figure - very deep roots in the soul of Albion." Yes, that is what I think too. Even if what we see now is of relatively recent construction it is as if it brought out what was already there on some level.

According to Phil Carr-Gomm,(head druid who lives here in Lewes) there were two giants who lived on opposite hills,one on Windover,the other on Firle I believe. Not being initiated in these things i am not sure.It's all in "The Druids Way" .Seems like a nice chap and his mum comes to our church.

@David - I have read a fair bit of PCG's writing - because I am interested by neo-paganism, magic etc. But he does have the usual anti-Christian animus of neo-pagans; is a Leftist, and also a psychotherapist - so I cannot regard him as genuinely sound!