The Story and the Fable

Thomas Traherne, William Golding, and the Quest for Paradise Lost 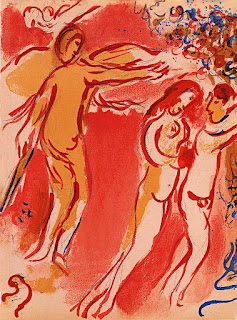 There is a powerful case, I believe, for the seventeenth century to be considered the high water mark of English literature, certainly with regards to the beauty and sonority of the language. One thinks of Shakespeare, Milton, Donne, The King James Bible, The Book of Common Prayer, Henry Vaughan and Thomas Traherne, to name but a few. The only twentieth or twenty-first century English writer who comes close to such felicity and resonance of expression is, in my opinion, William Golding (1911-93).

In this piece, I present two passages from Golding's 1959 novel Free Fall alongside two extracts from Centuries of Meditation, a devotional meditation par excellence from the afore-mentioned Anglican Divine, Thomas Traherne (1637-74). The similarities in language and style are clear, but there is an extra shared element which stands out - more important, perhaps, and more germane to the human condition - a sense of a lost Eden, a nostalgia for the wonder and integrity of childhood vision, and a deep-seated intuition that this miraculous view of things is not false but emphatically true, not childish wishful-thinking but a genuine insight into the nature of reality, a perception which can and should be restored to the beaten down, world weary and cynical adult mind.

In the first extract, which is also the opening paragraph of Free Fall, Golding's narrator, the artist Sammy Mountjoy, meditates on the double-edged nature of his being - his awareness of an underlying shape and pattern to the world, and his inability to live in that state or even believe in it for very long. In the following two passages, Traherne reflects on his childhood's easy, natural recognition of life's inherently wonder-full nature, and how that clarity of vision became slowly and steadily diluted. Finally, we return to Sammy, a prisoner of war now, released from solitary confinement after a terrifying but triumphant battle against an army of inner demons. The dismal universe of the prison camp is transfigured for him into a Dante-esque Paradise. This is the moment which Sammy recalls at the beginning of Free Fall, wondering why, despite such numinous blessings, he remains such 'a burning amateur, torn by the irrational and incoherent, violently searching and self-condemned.'

What is at stake here is the difference between what the poet Edwin Muir called the Story and the Fable. The Story represents the surface life of the individual (or nation), but the Fable is that which every man and woman seeks - at a mythical, archetypal level - to achieve, reflect and embody. 'It is clear,' Muir wrote, 'that no autobiography can begin with a man's birth. We extend far beyond any boundary line which we can set for ourselves in the past or the future, and that the life of every man is an endlessly repeated performance ... But what we are not and can never be - our Fable - seems to me inconceivably interesting. I should like to write that Fable, but I cannot even live it.'

But the Fable is lived and enacted and reflected, again and again in the many and varied scenarios of human life and history. If this were not so, our time on Earth would carry no metaphysical purpose, and literature, art and poetry - maybe even religion itself - would not be required.

The Fable is both old and new - inhabiting time and space, yet also beyond time and space - a live coal, calling out to the men and women of every age to be recaptured, rediscovered, retold and reclothed. This is what Golding and Traherne set out to do. We should not be afraid to follow in their footsteps.

'In my beginning,' to quote another master of the English language, 'is my end.'

I have walked by stalls in the market-place where books, dog-eared and faded from their purple, have burst with a white hosanna. I have seen people crowned with a double crown, holding in either hand the crook and flail, the power and the glory. I have understood how the scar becomes a star, I have felt the flake of fire fall, miraculous and pentecostal. My yesterdays walk with me. They keep step, they are grey faces that peer over my shoulder. I live on Paradise Hill, ten minutes from the station, thirty seconds from the shops and the local. Yet I am a burning amateur, torn by the irrational and incoherent, violently searching and self-condemned.

Eternity was manifest in the Light of the Day, and something infinite behind The City seemed to stand in Eden, or to be built in Heaven. The streets were mine, the temple was mine, the people were mine, their clothes and gold and silver were mine, as much as their sparkling eyes, fair skins and ruddy faces. The skies were mine, and so were the sun and moon and stars, and all the World was mine; and I the only spectator and enjoyer of it. I knew no churlish proprieties, nor bounds, nor divisions: but all proprieties and divisions were mine: all treasures and the possessors of them. So that with much ado I was corrupted, and made to learn the dirty devices of this world. Which now I unlearn, and become, as it were, a little child again that I may enter into the Kingdom of God.

(One of the four magnificent Traherne Windows in the Audley Chapel, Hereford Cathedral, created by the stained-glass artist Tom Denny - www.thomasdenny.co.uk)

That first Light which shined in my Infancy in its primitive and innocent clarity was totally eclipsed; insomuch that I was fain to learn all again. If you ask me how it was eclipsed? Truly by the customs and manners of men, which like contrary winds blew it out: by an innumerable company of other objects, rude, vulgar and worthless things, that like so many loads of earth and dung did overwhelm and bury it: by the impetuous torrent of wrong desires in all others whom I saw or knew that carried me away and alienated me from it: by a whole sea of other matters and concernments that covered and drowned it: finally by the evil influence of a bad education that did not foster and cherish it.

Therefore when the commandant let me out of the darkness he came late and as a second string, giving me the liberty of the camp when perhaps I no longer needed it. I walked between the huts, a man resurrected but not by him. I saw the huts as one who had little to do with them and the temporal succession of days that they implied. So they shone with the innocent light of their own created nature. I understood them perfectly, boxes of thin wood as they were, and now transparent, letting be seen inside their quotas of sceptred kings. I lifted my arms, saw them too, and was overwhelmed by their unendurable richness as possessions, either arm ten thousand fortunes poured out for me. Huge tears were dropping from my face into dust; and this dust was a universe of brilliant and fantastic crystals, that miracles instantly supported in their being. I looked up beyond the huts and the wire, I raised my dead eyes, desiring nothing, accepting all things and giving all created things away. The paper wrappings of use and language dropped from me. Those crowded shapes extending up into the air and down into the rich earth, those deeds of far space and deep earth were aflame at the surface and daunting by right of their own natures though a day before I should have disguised them as trees. Beyond them the mountains were not only clear all through like purple glass, but living. They sang and were conjubilant. They were not all that sang. Everything is related to everything else and all relationship is either discord or harmony. The power of gravity, dimension and space, the movement of the earth and sun and unseen stars, these made what might be called music and I heard it ...

Standing between the understood huts, among jewels and music, I was visited by a flake of fire, miraculous and pentecostal; and fire transmuted me, once and forever.

Posted by John Fitzgerald at 12:35

I certainly agree that the language was at its best in that era, indeed starting a bit earlier -- since much of the Authorised Version and Book of Common Prayer come from Tyndale, Coverdale and Cranmer, in the 1500s.

I went ahead and picked up Golding's Free Fall on the strength of this post. Am immensely enjoying it thus far. "Our mistake is to confuse our limitations with the bounds of possibility." (p. 9)

Like many, I suppose, I never gave Golding a second chance after being forced to read his repulsive Lord of the Flies as a child. (Similarly, my intense dislike of the school-assigned Crime and Punishment kept me for a long time from discovering The Brothers Karamazov. Do you suppose the educators do that on purpose?) I'll definitely give Free Fall a try based on your recommendation, though.