A Meditation on York 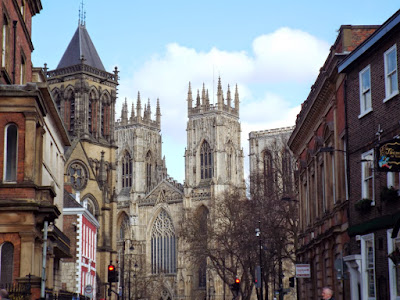 Last weekend I visited York with my family. We expected beforehand to receive an impression of different layers of history - Roman, Anglo-Saxon, Medieval, Tudor, Stuart, Georgian, etc - interacting and intertwining. That had been the dominant motif on previous trips, but what struck us particularly this time was the general ambience of harmony, centredness, order and proportion; at once profoundly human - firmly rooted in the everyday - while reaching up to Divinity in its spiritual vision and aspiration.

York Minster, the largest Gothic Cathedral in Northern Europe, is the hub at the centre of the wheel, setting the tone with its mass, height, beauty and scale. Its light-coloured stone lends it an unobtrusive softness which offsets its bulk, while its towers can be spied from all angles and quarters. We found it a wholly benign presence, an embodiment of Tradition watching over the town and its inhabitants like a wise and kindly father, holding York's smaller churches - St. Michael le Belfry, St. Wilfrid's, St. Olave's and others - under its wings, it seemed, giving them the freedom and space to flourish and act out their own vocation and role.

The Minster bells ring out every quarter of an hour. For around fifty minutes on Saturday afternoon, between four and five, they played an astonishingly beautiful tune, which I wish I could remember now but know that I would recognise instantly were I to hear it again and associate it always with everything noble and pure. Wheeling our son around the Dean's Park next to the Minster and the cobbled streets radiating out and around, I had the sense of each and every one of us - tourists, street traders, hen parties, beggars, men watching football in pubs, everyone - caught up in a great Platonic music, which rang out in Heaven before the foundation of the world and will carry on sounding forever and aye. There was something of eternity in that music, something healing too. It felt true and right. It felt like home - comforting, familiar and secure - qualities which our current model of society seems all too often all too keen to dismantle from within - to mock, belittle, undermine and subvert.

This is what the poet Kathleen Raine called the 'Great Battle' of our times, and it is a contest which needs to be won. The faces of the men, women and children relaxing in the Dean's Park told us that - a total absence of strain, tension, hurry or impatience. The beneficial influence on body and mind of the Minster and its surrounding buildings was plain to see, an all round sense of pattern, goodness and right order.

This revealed itself again to me the following day at the early Mass at St. Wilfrid's, a stone's throw from the Minster's great West Doors. The priest, I recall, bent low over the candlelit altar, the Minster bells rang for a quarter past nine, and it felt for a moment like they were ringing for us as well - for the priest, for myself, for my neighbours and all gathered there - and not just ourselves but for everyone else - for my wife and child in the Park, for the townspeople up and about on a Sunday morning, sipping coffee and reading papers - and for more than these even - much more - for the men and women of all the historical ages gone by - Roman, Celt, Saxon, Norman and Dane - and those yet to come. The curtain lifted a little and I caught a glimpse, I think, of what W.B. Yeats found so compelling in Byzantium and why he called it the 'Holy City', and of what William Blake and Charles Williams saw in the streets and squares of London - nothing less than the great and timeless archetype of the Heavenly City - the Civitas Dei - the City of God.

The bells ceased and the Mass continued, but their echo rang on in my mind. The enemies of the Good, the Beautiful and the True, I realised, can huff and puff all they want. They will never take the Heavenly City. It stands beyond their reach; anchored in eternity. Even if Byzantium were to be blown apart in some awful catastrophe, it would simply re-emerge somewhere else.

Somewhere like York, for example.
Posted by John Fitzgerald at 16:25

A beautifully wriiten piece! You have a gift with words. I felt I could identify with the experiences you had. I recently visited Ripon Cathedral and had a similar sense of being at home on the autumn leave strewn streets there abouts. Crisp cold fresh air in the park and sense of unhurried calm in the atmosphere and radiating from the architecture from across the ages.

Thank you David. Yes, I know exactly what you mean about Ripon. We were there in August 2014 at a time when I was feeling particularly unsettled by the great advances ISIS were making in Iraq. You describe the Cathedral and the Park very well. It was exactly that sense of unhurried timelessness in the architecture that helped calm me down, reduce the mental pressure of immediate events, and give me back a sense of historical depth. I found nearby Fountains Abbey very evocative too.