The Shadow of King Arthur

This short piece is Appendix Three in the late Stratford Caldecott's The Power of the Ring: The Spiritual Vision Behind The Lord of the Rings (2005). It could just as well, to my mind, be called Albion Awakening, given how germane its themes are to those of this blog ... 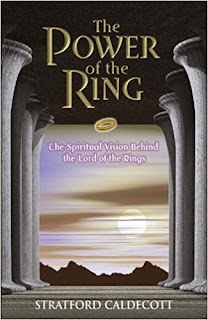 ... When the Israelites first demanded a king, Samuel told them in no uncertain terms what they could expect:


These will be the ways of the king who will reign over you: he will take your sons and appoint them to his chariots and to be his horsemen, and to run before his chariots ... He will take the best of your fields and vineyards and olive orchards and give them to his servants ... He will take the tenth of your flocks, and you shall be his slaves. And in that day you will cry out because of your king, whom you have chosen for yourselves; but the Lord will not answer you in that day. (1 Sam. 8:11-18)

Kingship is arguably the source of our most potent political mythology. The Israelites were not to be dissuaded from their decision "to be like other nations." And we find all that Samuel prophecied coming true. Yet God brings good out of evil, and in King David, only a generation later, he raises up a true hero: a king who is also a prophet, a poet, and a liberator. Builder-up of the great city Jerusalem, David is also a sinner. The privilege of creating a temple for the Lord is consequently reserved for his son Solomon, whose very name has become synonymous with wisdom, and the splendour of whose reign is legendary. "The king made silver as common in Jerusalem as stones, and he made cedars as numerous as the sycamores of the Shephelah" (1 Kings 10:27). Yet Solomon, too, fell, and lower than his father ever did - with hundreds of women and foreign gods - until the Lord raised up enemies against him.

Each king is able - or at least attempts - to draw on the mystique already accumulated around the names of his predecessors. We see it in the Caesar's; we see it in those who would imitate them: Charlemagne, Napoleon, Hitler. We see it in the tsars and kings and princes of every country and region. In England we see it expressed in the legends of Arthur and the histories of Alfred; we see William the Conqueror, Richard the Lionheart, Henry VIII, and Elizabeth I aspiring to the same mantle, with varying degrees of success. The abuses of kingship are notorious. Yet even now (in some parts of the world) the institution survives. Americans often fail to understand its appeal - except in terms of the glamour that attaches to great entertainers like Elvis, or great political soap opera stars like the members of the Kennedy clan.

In keeping with the origins of their nation, the more archetypally American the hero, the more he (or she) is a lone individual set against a system or a wilderness. Even the five-minute heroes of the screen draw upon that mystique. Yet having a royal family at least enshrines the principle that society revolves around the family and not the individual.

G.K. Chesterton's Ballad of the White Horse, which Tolkien knew, is largely about the romance of kingship, in those far-off days when a king could be at the same time a hero. Such a king is not merely a lone individual, but the representative and guardian of a realm and a people, whether by virtue of the blood royal or by divine appointment (like Saul and David). Nevertheless, the hero, even when he is a king, must always be more than a cipher or a figurehead. The power of the archetype comes into its own when the king manages to combine possession of the cardinal virtues with the opportunity to act decisively at one of the turning points of history. Then archetype can serve personality, and personality the archetype: the king is worthy of the honour he receives. Such a monarch can become for each of us a living symbol not only of what binds us together in society, but of what we each aspire to become in our own circle.

Every nation has a legend or set of legends that help to define and enshrine its sense of identity and mission. For Chesterton, whose thought is so close to that of Tolkien in these matters, a national identity is shaped by the interplay of legend with landscape. Countries become beautiful, he thinks, by being loved - by being transformed in love by the imagination of those who live and die there. Those who have lived become part of the landscape and part of the legend. Graves and monuments are for visiting and the shrine at the end of the end of a pilgrimage provides a meeting place between earth and heaven that sanctifies the whole realm.

For Romantics such as Chesterton and Tolkien, imagination is an organ of perception, not merely of fancy. Mythology may be the only way that certain truths can find expression. But the imagination can also transmit a lie, a false perception. Tolkien writes of the way Hitler had corrupted the imagination of Europe: "Ruining, perverting, misapplying, and making forever accursed, that noble northern spirit, a supreme contribution to Europe, which I have ever loved, and tried to present in its true light" (Letter 45). The dark side of the imagination is to provide the irrational basis for all kinds of injustice and cruelty. In a fallen and corrupted world, our imagination is in desperate need of healing. It may still be an organ of perception, but the inner senses have light only through the moral organs of the soul.

The national legend of England was given form in the high Middle Ages by Geoffrey of Monmouth, Robert de Borron, the Cistercians, Malory, and a host of lesser storytellers. The whole edifice of Arthurian legend was based on fragmentary historical tales of a great chieftain who defended the remains of the Imperium from the barbarians after the protection of Rome was withdrawn. The Kingdom of Logres is, of course, more than a part (or even the whole) of what we now call Britain. It is our inner kingdom. Overthrown by human sin and weakness as soon as it was glimpsed on the stage of history it was not destroyed but "withdrawn" into the imaginal landscape of Britain, just as Arthur himself was not killed on the field by Mordred but transported to the Island of Avalon.

Avalon itself is often identified with Glastonbury Tor, which other legends link to the visit of St. Joseph of Arimathea with the Holy Grail. Joseph himself is symbolically linked by his cup and flowering staff to the other two Josephs of the Bible, in the Old and the New Testaments respectively. The national legend of England is thus a thoroughly "Christian" legend (in fact a bit too obvious a Christian allegory, Tolkien thought). Arthur's perennial mission is to render England receptive to the Blood of Christ, a receptivity of which the Grail is the emblem, and the flowering staff the result. (In John Boorman's film Excalibur, the land literally blossoms under the hooves of Arthur's knights.)

The Arthur story, like all Christian myths, conforms itself to its own supreme archetype, the story of Christ, which is both myth and history. Just as Christ gathered his twelve disciples, so Arthur gathered his knights. As Christ died on the cross before his kingdom could be realised on earth, so Logres ended in a field of blood and betrayal. But the perennial hope of healing and resurrection lives in the Grail, in the Eucharist, which may always be revealed to those who search for it. And as Christ will come again, so in him Arthur will one day restore the Kingdom of Logres.

I don't know whether Tolkien truly intended to rework the Arthurian legend of a Golden Age king, though it certainly formed part of the "leaf-mould" that nourished his own tale, and the parallels between them are numerous - even down to the fact that King Elessar is associated with a green stone (the Elfstone after which his house is named). For in Wolfram von Eschenbach's Arthurian tale Parsifal, the Holy Grail is formed out of a green stone that fell from Lucifer's crown when he was struck down by St. Michael. This possibly connects it also with the Silmaril taken from Morgoth's crown by the great hero Beren, an ancestor of Aragorn and the symbolic figure with whom Tolkien most identifies himself. But then, in Tolkien's fertile imagination all the tales and legends of Europe and the Middle East, from Gilgamesh to King Sheave, from Troy to Camelot, were gathered and their elements rearranged - a more accurate term might be "digested" - and transformed. Tracing these various influences on the author is an endless task, and one that Tolkien himself strongly discouraged. A story is to be read, he argued, not picked apart by critics and scholars.

Posted by John Fitzgerald at 13:58