On a recent walk I looked again at Heddon Hill in the Breamish Valley, Cheviot Hills, Northumberland: 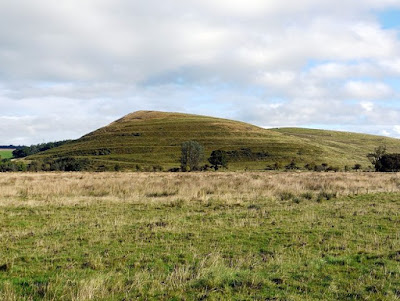 As you can see, there are very striking terraces on the left of the hill, and these are partly obscured by later vertical ridge-and-furrow ploughing in the middle section - better seen here: 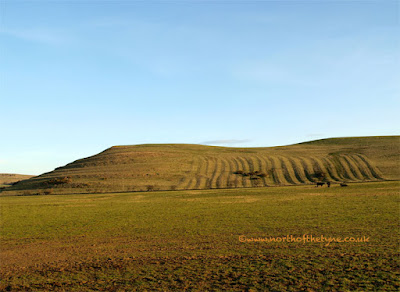 These markings are described on the OS Map and in guide books as 'cultivation' ridges - with varying estimates of age; from medieval right back to pre-Roman... who knows, the hill hasn't been excavated (and such excavations usually show features to be much older than expected, sometimes by thousands of years).

Looking at the 'terraces' I thought of the appearance of Glastonbury Tor and its 'terraces' - or as some - including John Michell - would have it... Ceremonial Labyrinth. 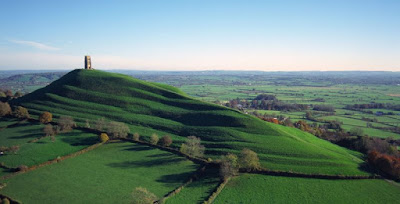 Could the distinct terraces on Heddon Hill actually represent the remains of a labyrinthine path? Ascending to some 'temple' at the summit?

Michell's idea was that such features were often dedicated to a pagan deity whose identity was replaced by the angel St Michael; thus the ruined tower on Glastonbury Tor was from a St Michael's church. Michell then suggests that prominent sites dedicated to St Michael formed a straight line alignment (a Ley Line; some kind of energy flow, supposedly) across England: 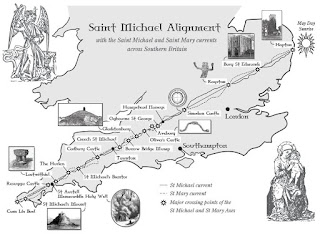 Well, with such thoughts swirling; I was surprised to find that the very nearby church in Ingram, in the Breamish Valley, was also St Michael (and all angels)... 'Perhaps' the church in the valley replaced the temple on the summit a few hundred yards away?

So we have several Michell-esque ingredients of an 'alignment' or Ley Line here! The next step would be to get out the maps, a pencil and a long straight edge. But I have not yet taken the matter any further... 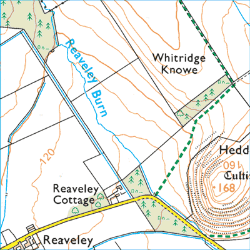 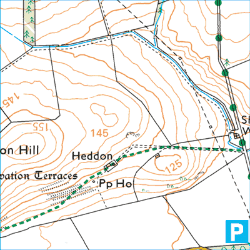 What is the point of the labyrinthine path? To confuse and disorient a pilgrim? Or to lengthen the journey while giving glimpses and views of the final destination?

Usually a maze is a sort of enclosing obscuring prison...

@a - The idea is that labyrinths - a labyrinth being a single, complexly winding path, and Not a maze in which you could get lost - were spiritual constructs; walking the labyrinth was a ritual.

So people are envisaging that the ascent to a hilltop temple - or some other sacred 'centre' would proceed by a processing along this path - perhaps in a formal procession, led by a priest. During the physical journey, a simultaneous spiritual change would be happening as a preparation.

Presumably, some ceremony would occur once the centre of the labyrinth had been reached.

To continue the speculations about Heddon hill - visual inspection, confirmed by the map, is consistent-with its being the (somewhat distorted) remains of a 'classical' seven-circuit labyrinth -

I suppose the reason why my mind was on such matters was that I was doing the 'hill fort walk' - which goes between several prehistoric strcutures, with concentric mounded banks - this area is exceptionally rich in such remains. Some were indeed probably used as forts at some times - but others were probably more like temples, others again used as defensible villages.

But a hilltop location is a bad one for practical purposes - no water supply, for example. In the 'iron age' (later bronze to pre-Roman) there seems to have been continyal internal warfare; so defence was the priority. But in the Neolithic and early bronze age (the megalithic era) the country was pacified, and hilltops would not have been used for defense but presumably for the religious purposes towards which so much of that society seems to have been orientated.

If Heddon Hill dates from the Neolithic/ Early Bronze age, then it was likely to be a hill top, domed 'temple'; rather than originally being farmed, or being a fort.