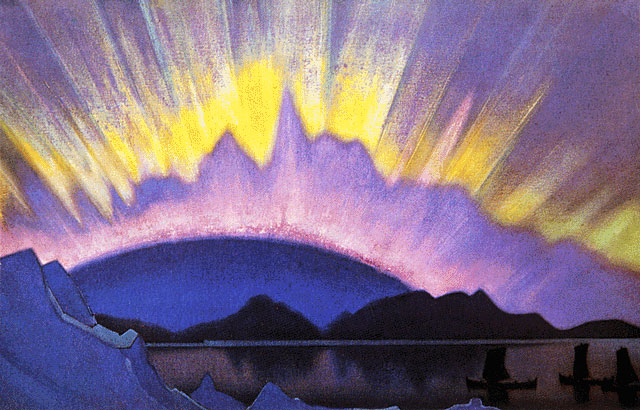 The Northern Lights have been seen over Britain. The report I read in The Daily Telegraph of 9th September described the phenomenon in strictly scientific terms - a series of solar flares, visually stunning, for sure, but bearing no deeper significance.

An apocalyptic part of me wants to protest at this. Surely the coming of the Lights is a sign? A foreshadowing of some great event to come, as the appearance of Halley's Comet in April 1066 gave notice retrospectively of the impending Norman Conquest.

A balance needs to be struck, therefore, between a rationalistic, unimaginative reading of natural phenomena and a credulous 'signs and wonders' mentality, which leaves us finding messages in cloud formations and the like. C.S. Lewis gets this right I feel in The Voyage of the Dawn Treader:

'In our world,' said Eustace, 'a star is a huge ball of flaming gas.'
'Even in your world, my son,' said Ramandu, 'that is not what a star is but only what it is made of.'

The eye of imagination, the eye of faith, sees beyond the physical components that make up the universe. It does not deny their existence but neither does it view what something 'is made of' as its sole and absolute reality. It goes past the material level (the validity of which it respects) to the spiritual essence which lies at the heart of every created thing. William Blake expressed this wonderfully in his famous quote:

'I assert, for myself, that I do not behold the outward creation and that to me it is hindrance and not action. "What! it will be questioned, "when the sun rises do you not see a round disc of fire somewhat like a guinea!" "Oh! no, no! I see an innumerable company of the heavenly host crying 'Holy, holy, holy is the Lord God Almighty!" I question not my corporeal eye any more than I would question a window concerning a sight. I look through it, and not with it.'

This theme is illustrated superbly in the passage below from Rosemary Sutcliff's Arthurian novel Sword at Sunset (1963). Ambrosius Aurelianus, the High King, is dying of cancer. He takes his lieutenants, Artos (Arthur) and Aquila, on a winter retreat in a remote hunting lodge to secure the succession. A tense political discussion is interrupted by the appearance of the Northern Lights. The tone and flavour of the evening is altered dramatically as new perspectives open up for all three men.

Hearts start to soften. The display outside triggers deep-lying memories in Artos and Aquila and sparks a moment of fraternal understanding. Ambrosius, when he rejoins the conversation, speaks with an imaginative fluidity that was lacking before. The political becomes the mythical. Something hard and tight has been broken apart, creating a space for the deeper pattern behind the flow of surface events to emerge.

This is the lasting impression left on the reader by Sword at Sunset - the political transformed into the mythical. Artos, in the end, follows Ambrosius' recommendation and succeeds him after his death, though not as High King but Emperor of a restored Romano-British Empire. Artos has many scars - physical, emotional and spiritual - and gains little satisfaction from his twenty year reign. He does, however, bring peace and security to the land, and through his words, deeds and presence, sows the seeds of the great national myth that has sustained the imaginative life of our country ever since.

The Northern Lights, on this occasion, are heralds of restoration rather than harbingers of doom, signalling the advent of a mythic, archetypal hero and the flourishing of the realm. Let us hope that their most recent manifestation prophecies equally glad tidings. There is no reason why not. 'We live in a time of revelations,' wrote the maverick English mystic, John Michell. 'When our minds are ready, the pattern will appear.'

... After we had sat in silence for a while, Ambrosius spoke again. "Artos, I have a sense of fate on me. It is not merely that our scouts report certain movements of the Saxons. I believe in my bones, in my very soul, that a Saxon thrust such as we have not seen before is coming this spring - by midsummer at latest: and when it comes, there will be a struggle compared to which the battles we have known will be but candles held to a beacon blaze. And believing that, I must believe that this, above all others, is not the time to be leaving Britain in the hands of an untried king, but rather in the hands of a strong and well proved war-leader. As to what comes after, so far as the question of my successor is concerned, the victory in such a struggle would be a mighty weapon in your hand, Bear Cub, and if you fail, then Britain will not need a High King again."

His voice had died almost to a whisper, hoarse in his throat, and his brilliant eyes were haggard, clinging to my face. Yet still I was half resisting; and not from humility but from lack of courage. I had always been one who dreaded loneliness, the loneliness of the spirit. I needed the touch of other men's shoulders against mine, the warmth of comradeship. I was a fine war-leader, and I knew it, but I shrank from the very thought of what Ambrosius was asking of me. I did not want the loneliness of the mountain top.

Aquila had risen some time before, and tramped over to the window at the end of the room; he was something of a lone wolf, old Aquila, and his own deep reserve made him flinch from the least probing into the reserves of other men; and I suppose he did not want to see our faces while the last stages of the thing were fought out. Suddenly he spoke, without turning from the window. "Talk of beacon blazes, there's something big burning over yonder beyond Ink-Pen, by the look of it!"

I got up quickly and went over to him. "Saxons! Open the window, Aquila." He lifted the pin and swung wide the glazed leaf, and the cold and the smell of frost flowed in against my face. The window looked north, and as the dazzle of the firelight faded from my eyes, and the stars began to prick out in the clear sky, I could make out a dull red glow in the sky, like red reflection of a great fire.

Even as I watched, the glow was spreading, rising higher into the stars. "It would take a whole city burning to yield that glare," Aquila said, and I could hear the frown in his voice. And then the formless glow began to gather to itself a shape, a great blurred bow, and out of its brightness suddenly a streamer of light flickered up into the dark sky, and then another, and another; and I wondered why I had been such a fool not to know the thing at once - I suppose because in my mind it belonged to the North, and so I was blind to it here in the South Country. I laughed, and something in me lifted as though at the touch of a familiar magic. "No Saxons tonight, old wolf. It is the Northern Lights, the Crown of the North. Dear God, how many times I have watched those flying ribbons of fire from the ramparts of Trimontium!" I glanced aside at Aquila, whose exclamation told me that he had recognised the thing he looked at, at the same moment as myself. "Sa Sa! You too! You must have seen them often enough in your thrall winters in Juteland."

"Often enough," he said. "They used to grow and grow until they were like great banners of light flying all across the sky; and the old men would say that they could hear a rushing of great wings overhead ... But one scarcely ever sees them here in the South, and then no more than the red glow that might be a farm burning in the next valley."

There was a movement behind us, the scrape of a chair being thrust back, and a slow slurred step on the tesserae, and we moved apart to make room for Ambrosius between us. "What is this marvel? This Crown of the North?" He set a hand on my shoulder and the other on Aquila's, breathing quickly and painfully, as though even the effort to rise and cross the floor had been a day's labour to him. "So - o," he said, lingeringly, when he had got his breath back. "A marvel indeed, my brothers." For in that short while that we had been standing there, the light had strengthened and spread, until one got the impression of a vast arc spanning the whole night, if one could have but seen over the northernmost hills that hid it from view; and from that unseen arc, as though it were indeed the head-band of a crown, a myriad rays sprang out, darting and wheeling to and fro, flickering out half across the sky, like ribbons of coloured fire that licked and trembled and died and darted forth again, changing colour moment by moment from the red of blood to the green of ice, to the blue of the wild-fire that drips along the oar blades of the northern seas in summer nights.

"I too have seen the glow like a burning in the next valley, and a flicker or so in the northern sky, from the high shoulder of Yr Widdfa," Ambrosius said, in the tone in which a man speaks in the place where he worships his gods, "but never the like of this ... Never - the like of this."

Voices, scared and hushed and excited, were sounding in the courtyard, a babble of tongues and a running of feet. Down there they would be pointing and gesticulating, their faces awed and gaping in the strange flickering light. "The others have seen it now," Aquila said. "They could scarcely make more startling chatter if it were a golden dragon in the sky."

"There will be many pointing to the north and bidding each other to look, tonight," Ambrosius said musingly. "And later, all Britain will tell each other that there were strange lights in the sky on the night before Ambrosius Aurelianus died; and later still, it will become Aquila's dragon, or a sword of light with the seven stars of Orion set for jewels in the hilt." 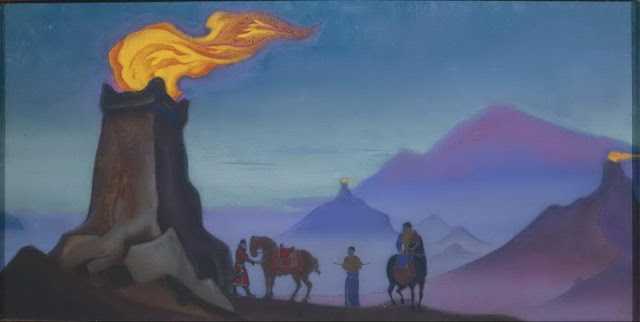 Posted by John Fitzgerald at 15:34

@John. I had certainly considered this matter - although the Northern Lights were - sadly - concealed from me by solid cloud cover.

The level at which I was considering it was that the Auroa is caused by sun activity - in this case by an exceptionally powerful sun-spot cluster - which bathes the earth in so much (extra, and unusual) radiation that it changes the sky and the weather - how could this not also change the minds (and bodies) of Men?

Given that (many people including Rupert Sheldrake and myself) agree that the sun is (in some vital sense) alive, and an angelic being - the ingredients are all there for significance.