The Best Image of Christ by an English Painter?

(Note: This post is something in the way of a companion to the previous one).

William Holman Hunt painted more than one version of his famous painting The Light of the World. The original, painted in 1853, is at Keble College, Oxford, and there is a second one at Manchester City Art Gallery. But my favourite is the one below in St Paul's Cathedral. 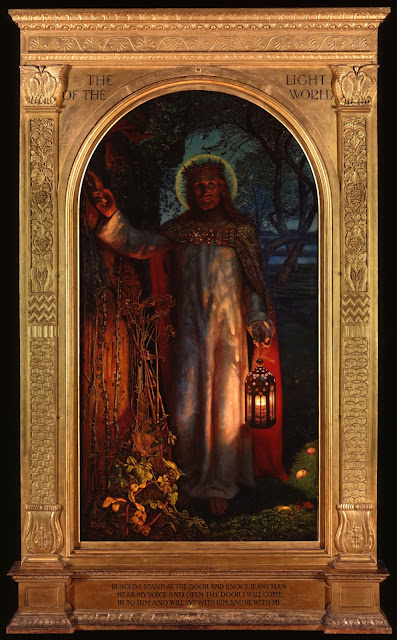 This was painted fifty years after the first in collaboration with Edward Robert Hughes, and is thought to represent Holman Hunt's last word on the subject. It's my favourite because of Christ's face. It's in shade in the reproduction above but here it is close up. 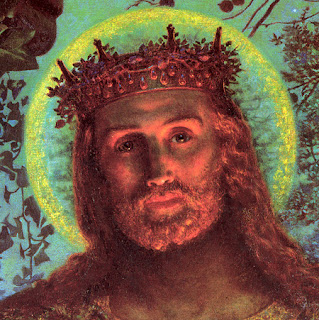 The painting shows Christ knocking at the door of the human soul, and is based on the text from Revelation."Behold I stand at the door and knock; if any man hear my voice and open the door I will come in to him, and will sup with him  and he with me". It is rich in symbolism. The door is covered with overgrown weeds indicating that the spiritual life of the individual concerned, who is Everyman, has been neglected. It has no handle, showing that it cannot be opened from the outside. We have to make the move to invite Christ into our heart. The night sky with a bat flying at top left above the midpoint between Christ's hand and head (obscured here unfortunately but you will see it if you zoom in) shows that the hour is late, and the fallen apples by his feet refer back to the Garden of Eden and our fall from divine grace.

The painting is called The Light of the World referring to the passage from St John in which Jesus says " I am the light of the world. Whoever follows me will not walk in darkness, but will have the light of life." There are two lights depicted. The first is that of Christ himself, his halo, and the second is the lantern he carries which is what shows us the way to eternal life, and maybe eventually is passed to us so that we too may have the light within ourselves. Spiritual truth and reality is best understood in terms of light, and Christ is spiritual light personified. I don't mean this as a metaphor. I think it is literally true.

This painting became extraordinarily popular in the early 20th century. It was described as a sermon in a frame, which indeed it is, and it even went on a world tour, visiting many towns in Canada, South Africa, Australia and New Zealand, and supposedly being seen by millions of people in the process. Reproductions hung in church halls, schools and nurseries. I venture to say it might have inspired many with a greater love for Jesus Christ than countless more conventional sermons achieved at the time. Such is the power of the  true artist.

Posted by William Wildblood at 02:24

Holman Hunt isn't one of my favourites - I like several of his works, but I cannot be wholehearted about any - in the way I can about, say, Millais's Ophelia.

I think Millais was the only *really* good Pre-Raphaelite - although I like many or most of that school's work.

Most of my absolute favourite English painters (qua painters) are 18th century portraitists or landscape painters - and that was rather an irreligious age...

I am very difficult to satisfying wrt depictions of Jesus; as I wrote here:

For me, the eyes are the key there needs to be great strength in them; not just strength - of course - but I need to be able to see that he would dominate any group in which he found himself.

Something that to me argues in favour of the Turin Shroud's authenticity is the astonishing power of the face - even with the eyes closed. There's nothing in paintings of Jesus that approaches it.

That depiction is very nice, it feels very "Middle Earth" - it reminds me of Tolkien.