Who was the real Merlin? From Geoffrey Ashe 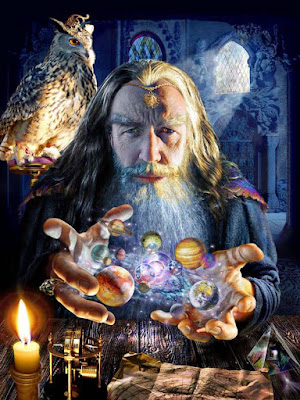 From Merlin the prophet and his history, by Geoffrey Ashe, 2006.

Merlin stands alone, and there is nobody like him.

The Britons had a paramount god who was comparable to Apollo - who was, among other things, a god of inspiration and prophecy. Britain was his 'precinct' or temenos, and he was Britain's tutelary deity.

This god has a special association with Moridenum (Carmarthen, Wales); and thus acquired the sobriquet Myrddin, which applied both to himself and to those inspired by him. Ambrosius and Lailoken were Myrddin-men, or simply Myrddins.

Geoffrey of Monmouth picked up the sobriquet and made the change from Myrddin to Merlin.

There were thus several Merlins, perhaps many. But if we want a Merlin par excellence, the original of the main legend, the place to look is Dina Emrys. Here the Merlin who speaks the prophecies is localised at a place which is known to have been occupied at the right time by someone who could be identical with him. Here story joins hands with archaeology.

As for Merlin's final fate, preference is a matter of taste... Legend traces him in several directions, to several eventual ends, after his triumphant years as royal adviser and magician. He dies at Marlborough and is buried under an inordinately big mound. Or he passes into suspended animation in Cornwall or Brittany.

Or, Merlin is alive and well, and living on Bardsey Island. His dwelling is an invisible house of glass. Some say he is asleep, but he may not be. If awake and active, he is not alone: he has nine companions.

Merlin is the guardian of the Thirteen Treasures of the Island of Britain - things of power that embody Britain's ancestral magic. Among them are the Chessboard of Gweddolau, the Chariot of Morgan the Wealthy, the sword of Rhydderch the Generous, a cloak of invisibility that once belonged to Arthur, the red coat of Padern, horns of plenty and talismanic objects that test valour and virtue.

No one knows what the Treasures look like, and they may have the same shape-shifting qualities as their custodian.

Finally, Merlin also has the true throne of Britain, and will enthrone Arthur when the king returns...

Who else, indeed, would have that right?