The Traveller's Key to Sacred England - by John Michell (1988): a book recommendation 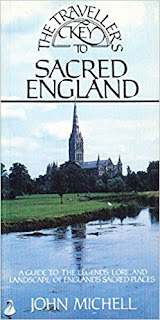 The Traveller's Key to Sacred England is a guide book by John Michell, which focuses on the kind of English places likely to be of interest to Albion Awakening readers, and provides the kind of information Albionites are most likely to value.

It would be an ideal book to give ideas of 'what to do' for someone visiting the country, or a native thinking about where to take a holiday.

Michell's comments are beautifully expressed, and generally very sound (at least as-of about thirty years ago - of course, some places have 'gone off' since then).

I shall open it 'at random' to give a flavour of the book:

St Catherine's Chapel Guildford: At the foot of the hill is the site of a religious establishment which vanished so long ago that no one knows whether it was a priory or a nunnery. The stretch of Pilgrim's Way which passes it goes between charming old cottages to the river, where the pilgrim's ferry has now been replaced by a footbridge. On the right of the path, just before it reaches the river, a spring well up from the bank. This is the holy spring of the Virgin Mary that refreshed every pilgrim on the way to Canterbury. Its waters are clear and refreshing today.

Sherbourne Abbey, Dorset: The abbey was rebuilt in the twelfth century, and in the fourteen a parish church, All Hallows, was added on to its west end. Its parishioners used the abbey font for baptisms until 1437, when a quarrel broke out between the people and the monks... When a new font was set up in All Hallows, the monks smashed it. A riot broke out, and it is said that a priest of All Hallows shot a flaming bolt towards the abbey, which was then being rebuilt. It caught fire and was largely destroyed... A boss in the choir vault [of the rebuilt Abbey] shows the flaming arrow, shot by the clergyman of all Hallows, which caused the burning of the abbey. The monks of the time must have had great tolerance and humour to allow this event to be commemorated so soon after at had happened.

Mother Shipton's cave and petrifying well, Yorkshire: Mother Shipton, born Ursual Sontheil in 1488, had the proper parents for a girl of supernatural powers, her mother being an outcast beggar woman and her father a local spirit or demon who haunted the forests outside Knaresborough... She is said to have been a hideous little creature, deformed , shrivelled and lame, with a huge twisted nose and pimples that were said to glow in the dark. Even so, she found a husband and became Mrs Toby Shipton.

As compensation for her appearance, Mother Shipton had second sight and the gift of seeing into the future... The Major triumph of her lifetime was over the powerful Cardinal Wolsey, who she had prophesied would never enter the city of York. Hearing this, Wolsey swore that not only would he enter York but he would go on to Knaresborough and burn Mother Shipton as a witch. He was... 12 miles from York when the king's officers arrested him on a charge of high treason. He died at Leicester on the way back to London.

The mizmaze on St Catherine's Hill, Winchester: ... the date and the ritual purpose of the mizmaze are unknown; estimates of its age vary from three hundred to more than a thousand years. Treading the maze, by walking the furrows between its raised banks, is a mystical and therapeutic experience. It may be that in following the spiral patterns of natural growth and energy, one orders the mind and attunes oneself to nature's rhythms. The labyrinths which sometimes occur on the pavings of medieval churches traditionally represent the pilgrim's journey to Zion.

I don't know if it's in the book but the Shrine of Mother Julian of Norwich is easily the most spiritually powerful place I've been to. A very palpable sense of holiness.