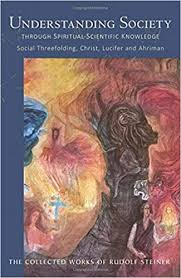 ﻿
My friend, Wayne Sturgeon (author of Albion Awake, reviewed on this blog in August) has informed me of a Social Threefolding conference taking place at Dartington Hall, Devon, on Saturday 16th and Sunday 17th November.

Social Threefolding is a concept developed by Rudolf Steiner and a key tenet of Anthroposophy. Steiner believed it had a vital, restorative role to play in a modern world that had lost its sense of balance and harmony. But what is Social Threefolding? What does it do? As a relative newcomer to Steiner's ideas, I think it wisest to let Terry Boardman provide the explanation. As Bruce Charlton has recently highlighted on this blog, Boardman is one of the most perceptive and articulate cultural commentators around. He is also a prominent Anthroposophist and facilitator of the Dartington Hall event. Here is what he says in his introduction to the conference:

"Threefolding needs to be seen in its historical context in order to understand why it is right for our time. We have a socio-economic system in the West that in its fundamentals is 400 years old. It reflects the dominance of the economic sphere over politics and culture, a dominance that has grown steadily since c.1600 and had become increasingly problematic and unhealthy. Three alternative 'solutions' to the social question became manifest in the 20th century - Anglo-American capitalism, communism and fascism - an unholy trinity.

"These three respectively represent perversions of personal liberty, class equality and fraternity. Over the past 100 years these three systems have proved themselves destructive of social and ecological well-being.

"Threefolding, by contrast, is based neither on animal behaviour (survival of the fittest) nor on abstract intellectual constructs ("scientific socialism") but on the understanding of the threefold reality of the human and social organism - body, soul and spirit - willing, feeling and thinking - economic life, political life and cultural life ... Our current modern social problems have stemmed from the fact that they are based either on animal models or on abstract intellectual models, neither of which are essentially truly human. But this requires understanding by each individual; it cannot be imposed from on high as a 'programme'. The three spheres of social life need to be grasped as clearly separate and requiring autonomy before they can be related to each other, their interconnection resembling that of the three physiological systems of the human organism - the nervous system, the circulatory system, the metabolic system, which are also separate but also interrelate. Each of us has these three physiological systems; each of us thinks, feels, wills. Each one of us is engaged in cultural, political and economic life. To grasp and comprehend this is an individual act. To realise it is a social act."

The conference organisers also point out that:

"William Blake's picture of Albion on the front cover of our brochure points to a new theme we are weaving into this year's conference. Albion is the true name of Britain, and Blake's vision opens up vistas of development for this nation far beyond the 'satanic mills' that are overproducing all the goods filling our materialistic consumer society."

So, plenty there to interest readers of this blog. For further information and details of how to book please go to www.socialrenewal2018.org

For me, it all comes back to the Holy Trinity, that Divine fraternity which serves as model and template for all our political, social and cultural activity here on Earth. As Sturgeon puts it in his book:

"God is a community. The Godhead is 'relational', therefore as God is 'Love' He must be more than a single being and is defined as being in relationship: Father (the unbegotten), son (the begotten) and Holy Spirit (who proceeds) ... As the Godhead is a unity in diversity, and balances both immanence and transcendence, is both 'one' and the 'many', dynamic but unmoved, we come to see that the tripartite or social three-folding vision of society is a reflection of the tripartite unity of humankind - body, soul and spirit - as man is made in the image of God the Holy Trinity. This is the divine template for the fully realised human society." (Albion Awake, pp.157-158)

Or as the monk Ninnias explains in Rosemary Sutcliff's novel, The Lantern Bearers:

"Three petals has the iris, see - a wise flower that carries the number of the Trinith in its head. Father, Son, and Holy Spirit; man, woman, and child; yesterday, today, and tomorrow. Three is the number of perfection and the perfected pattern."

The mystery of the Trinity has never been better expressed, in my view, than in Andrei Rublev's famous icon, The Hospitality of Abraham. We become what we contemplate. As above, so below. 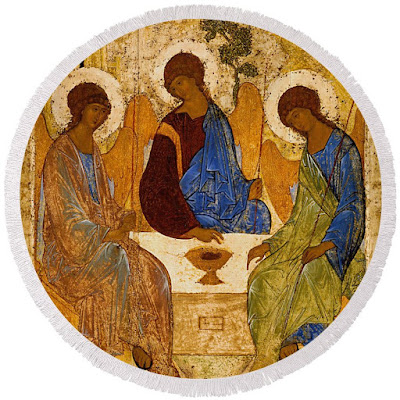 "Rare Albion" by Christopher Budd is very good book on this subject!! Get from ASSOCIATVE ECONOMICS web site.A story of how money can circulate in a Threefold way, based on Steiner's insights and economics lectures, the latter also obtainable from same web site.Happy reading, Will