The Vacuum of Leadership 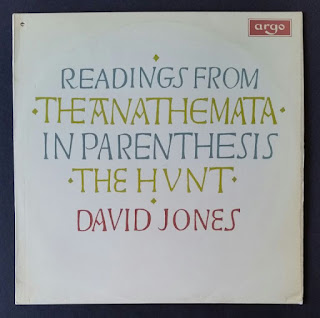 It should be enshrined in UK law that anyone who aspires to become Prime Minister must read and reflect on 'The Hunt' by David Jones, a mid-length poem which features in his collection, The Sleeping Lord, published in the year of the poet's death, 1974.

Jones's Arthur is 'a diademed leader.' But the jewels do not betoken a show-pony or a 'big-time Charlie.' Quite the reverse. They are worn by a man who knows, cherishes and values the worth of his land and the people of his land. He protects and he serves. He does what he does out of love and a sure and certain knowledge of what is noble and pure and has to be defended, to the last breath if need be. He pits himself face to face with the Great Hog who is ravaging his country. In doing so, he incurs the grievous wounds that render him the 'Sleeping Lord' of the next poem in the sequence, that avatar of Albion who the writers and readers of this blog, and many more all around the world, are endeavouring in ways great and small to awaken.

Arthur 'directs the toil.' His face is 'furrowed with the weight of the enterprise,' his 'visage fouled with the hog-spittle whose cheeks are fretted with the grime of the hunt-toil.'

Though his forehead is 'radiant like the smooth hill in the lateral light,' it is also 'corrugated like the defences of the hill ... '

Jones's Arthur goes to the deep places - physically, spiritually and mentally - 'because of his care for the land and the men of the land.'

It's not a game. It really matters to him. 'If his eyes are narrowed for the stress of the hunt and because of the hog they are moist for the ruin and for love of the recumbent bodies that strew the ruin.'

Now, is there any potential Prime Minister today at all capable of such vision, integrity and self-sacrificial love for the land he or she represents and in a sense incarnates as leader? I would say no. The last Western leader, as far as I'm aware, who invested his role with this level of high seriousness was Charles de Gaulle. Winston Churchill too. Perhaps it's no coincidence that both were high quality writers who believed in the saving, transformative value of arts and culture. They were men of intelligence and imagination allied to a strong ethic of sacrifice and service.

How rare these attributes are today. How quaint and old-fashioned it all seems. Not at all post-modern. We are too sophisticated and knowing now - too ironic - for characters like this who actually thought that religion, literature and history were real things, not just intellectual webs signifying nothing more than the letters and words on the page.

But it's exactly this level of intensity - this spark of genius - that we're missing. There are too many middle-managers in leadership roles. Too many people-pleasers and company men. As the theologian and poet, John Milbank, wrote on Twitter recently:

"Somehow the brightest people no longer figure at the top and this is part of why we are in a mess. Our elite institutions are not sufficiently shaping people of wisdom or else not many of those go into politics."

Things have to change and quickly. Because where we are at the moment the time is ripe for that 'Man of Lawlessness' spoken of by Saint Paul to rise up and make his mark on the world. And there will be no 'diademed leader' to stand in his way and take the hit for us.

Unless, of course, he awakens and raises his standard in the little time that remains to us.

@John - I certainly agree - and have done empirical work showin - that the brightest people are no longer at the top - and are indeed excluded; however, even if they were, it would not make matters better, because nearly-all of them are on the wrong side (including Professor Milbank!).

What makes one a leader is that others follow.

There are such men as you describe, but they have few or no followers. The more they genuinely are moved by deep love of their country and people, the fewer want to follow them.

Because the first fruit of such love is truth, and who wants to hear that?

The dominant religion is equalitarianism. So one moron is just as good as another, supposedly. Also, the institutions that were to produce leaders used to be explicitly Christian. Not so much anymore.