He showed me a little thing, the size of a hazelnut, in the palm of my hand, and it was as round as a ball. I looked at it with my mind's eye and I thought, 'What can this be?' And answer came, 'This is all that is created.'

I remember how astonished I was as a boy, around 1982, or 1983, when I heard the High Tory statesman Enoch Powell refer to Britain and Russia as 'natural allies'. This, at the time, seemed wrong on every level. it was the height of the Cold War, and Russia (or the USSR or Soviet Union as it was more widely known) was viewed as the great enemy of the West and an existential threat, both to our freedom and physical survival.

I had not read Dostoyevsky then. I did not know about the 'Holy Russia' that existed before the Bolshevik revolution of 1917 and had been so relentlessly persecuted by the Soviet state ever since. My geopolitical thinking, such as it was, ran in conventional East versus West lines. I lacked Powell's imagination, and the historical and political artistry which revealed to him Britain and Russia as kindred spirits. It seems as plain as a pikestaff now - two great powers on the peripheries of Europe, one to the East, one to the West, both with one foot in and one foot out.

It is nothing new. Tension has existed in Russia for centuries between Westernisers in the mould of Peter the Great (1682 - 1721) and Slavophiles (Dostoyevsky being a good example) who regard the West as at best a corrupting influence and at worst a mortal threat to the Russian soul. A similar ambivalence towards Europe has been on view in Britain for much longer than is often supposed. One thinks, for instance, of the Imperial usurper Carausius, who declared himself Caesar in 286 and claimed Britannia for his own, an act which led to the province's recapture by Constantius Chlorus (the father of Constantine the Great) ten years later. The story is superbly told in Rosemary Sutcliff's The Silver Branch (1957), with its skilful interweaving of Roman and Celtic motifs - the 'Federal' and the 'National', if you like.

I have been reflecting a great deal of late on Powell's perspective, wondering if there might be a more meaningful affinity between our nations than the geographical accidents which he saw - in classic 'great game' style - as opportunities to wield joint influence to curb the ambitions of any overweening continental power. It is a tempting consideration. Certainly on the religious level. Maybe the political too. Russia, it appears, is leaving her post-Christian era behind, while Britain (and the whole Western world) wilfully races into one of her own. As terror becomes the 'new normal' in Europe, I have increasingly felt that our wisest course of action is to request Russian assistance. We seem incapable of arresting our own decadence and wholly unable to root out the enemy within. Would we do better under Russian auspices? Perhaps, but great discernment and caution is nonetheless called for. It is easy for me to sit here and invite Moscow to start pulling the strings. There are, however, traditionally-minded people a-plenty in the former Warsaw Pact countries who would not add their names to the invitation. I have no experience of Russian hegemony. They have.

It is crucial, therefore, that any partnership between Britain and Russia is built on rock not sand - not on projection, wish-fulfilment, fear or mutual convenience, but on a deep and rich appreciation of each country's spiritual essence and core. To this end, I would recommend that before any talking begins, a long period of silent contemplation is needed, because it is only in silence that space can be cleared for this inner truth to make itself felt. There are innumerable objects, themes and places that  both parties could focus on, but for now I will suggest just two, one Russian and one English, one an icon and one a chapel.

First, on the Russian side, the Descent of the Holy Spirit, a late fifteenth-century icon of the Novgorod school. 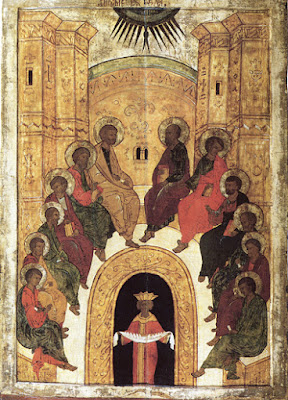 There is a stillness and quiet authority to this icon which I find utterly compelling. This is no pell-mell dash through Jerusalem on Pentecost morning, everyone speaking in tongues with flecks of fire dancing above their heads. What we see instead is pattern, harmony and peace, the Apostles and Evangelists sitting serenely in a semi-circle - a true community of faith - as the Holy Spirit descends discreetly in twelve short rays. Look at how much space there is - space for the Spirit to breathe, blossom and spring forth into the world, symbolised here by the weary-looking king at the bottom. His white garment bears the twelve scrolls of the Apostles, signs of his (and our) approaching liberation from the clutches of Hades.

'Beauty will save the world,' as Dostoyevsky famously wrote. It is on this level, I feel, that Russia can achieve her spiritual destiny - the fraternal, gem-like flame of her religious tradition pointing the way towards a more balanced, harmonious way of being, an alternative point of reference to the destructive mantra of 'individual choice' currently sowing so much chaos and unhappiness in the West and beyond.

As for our own country, well, there is clearly a Divine sensibility native to these lands. The British Isles, since long before the days of Carausius and Constantius, have been deeply receptive to the mystical and metaphysical. The Druids of Britain and Ireland, the stone circles of Avebury and Stonehenge, and the sanctity and courage of the Celtic saints bear potent witness to this. A whirl of commercial activity in recent centuries, allied to a coarsening and narrowing of vision, has served to obscure this underlying predisposition. But it hasn't left us. The Divine sensibility, and what it points to, remain - under the surface for now, but no less powerful and real for that. What it points to is the 'peace which passeth all understanding', and when one experiences that peace, a shift in levels takes place and that peace becomes all there is. All else ebbs and fades. Conflict becomes meaningless; discord and strife unthinkable. Peace is all that there was, will be, and is. It is 'all that has been created,' as Christ, the Prince of Peace, told Mother Julian. 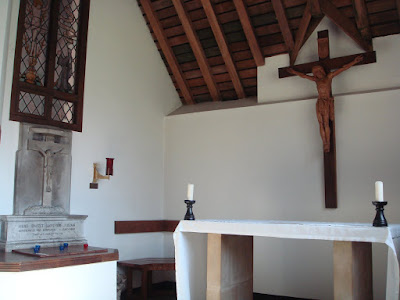 When my wife and I stepped out of Julian's cell on a Sunday afternoon early in 2014, it felt like the world had been subtly transfigured, the Holy Spirit sprinkling largesse onto the rooftops, chimneys and turrets of Norwich. What happened in the cell cannot be framed in words, but I regard that sacred space as the architectural equivalent of the Novgorod icon, and it is in standing before this icon and kneeling in this chapel that Albion and Russia can meet, connect and begin carrying out God's work in the world.

The Icon and the cell are both sites of reality; zones of silence, stillness and prayer. Only the real carries weight. Anything else is a sham - self-promoting fantasy or another 'great game'. What is real saves, heals and gives life. No matter how tiny, feeble or insignificant it seems. The real breathes, blossoms, and springs forth into the world to turn the tables on Hades at the appointed hour.

It is the destiny, I am sure, of our two great nations to be present and active at that hour. Let the great bell sound, therefore, the silence commence, and the peace which passeth all understanding - from Vladivostok to Tintagel - come down upon us all.
Posted by John Fitzgerald at 16:42

I really like the way you describe the descent of the Holy Spirit as something peaceful, still and sacred rather than the excitable semi-chaos in which it is often seen.

@John - A remarkable and unexpected piece, which I found both moving and stimulating.