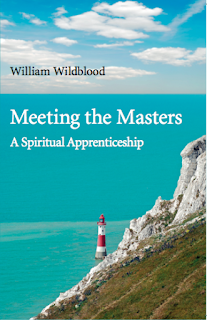 This is a revised version of a post I put on my Meeting the Masters blog a few years ago which I think has relevance here. The picture above shows the cover of a book but it’s the picture I want to draw attention to not the book. It shows Beachy Head lighthouse standing at the foot of the chalk cliffs on the Sussex coast of England near Eastbourne. I used to live  in the nearby village of Meads and would regularly walk along the downs between Meads and Beachy Head, attracted by the calm and peaceful atmosphere of the place which was rather at odds with the cliff’s sinister reputation. The springy grasslands and flinty chalk spoke to me of an England of the distant past, while the view of the sea from high up on the downs had something almost timeless about it. I would look across the waters, occasionally blue as in the picture but more often grey, and feel connected to a period long before history. For me this was definitely a place where the veil between Albion and England was thin. But that’s only one reason for drawing attention to this photograph.

Sometimes it’s best not to try to interpret a symbol but just let it speak to the intuition without undue analysis. That way it feeds the imagination rather than the outer mind which gives it greater meaning. However on this occasion I would like to say a few words about why I consider this to be a suitable cover for a book about spiritual matters.

When you begin to wake up, if I can put it like that, you see that there are three basic levels to reality which are the physical, the psychic and the spiritual. You only start to understand the true nature of the world when you acknowledge this and  learn to discriminate correctly between the various levels, seeing each in its proper place and not confusing one for the other as, in their different ways, the materialist and the New Age psychic both do. These three levels are shown in this picture by the land, the sea and the sky, otherwise earth, water and air. When we come to the limits of the physical world we find a new world, a world of imagination where thought can appear to take external form and form itself is malleable to the mind, but that is not the spiritual world though it may initially seem so to the unwary. The psychic plane, like the sea, teems with life of all descriptions. There is beauty and mystery. There are warm waters to bathe in and depths to explore but there are also sharks and even monsters. Like the sea, the psychic world is constantly moving, changing, reflecting images from above that disappear when you touch them, and, as with the sea, you have to learn to swim.

To find a more stable truth you need to go beyond the sea to the sky, beyond the psychic to the spiritual, but that requires an immense change in behaviour and attitude. It’s relatively easy to go from land to sea and most of us can swim to some degree at least. It’s not so easy to get up into the sky, and even when we do learn to spread our wings and fly we still have to penetrate an intermediate zone, that of the clouds, clouds of darkness and clouds of illusion, which can only be dissipated by the heat of the sun. That is to say, by the divine fire of truth.

So there are these three worlds of existence that are shown in this picture. There is also a lighthouse which we can say stands for guidance and illumination. It is a little bit of the sun come down to Earth. Normally a lighthouse warns ships to beware of rocks but this lighthouse, which we are seeing from the land rather than the sea, is fulfilling a different function. It is pointing up out of the sea into the sky and lighting the way clear to heaven. It is the beacon of spiritual tradition which is there to provide clear and reliable guidance. Nowadays most of us completely ignore it but it is always there, available to anyone who wants to find the path that leads to the sky.

The one thing you can't see in this picture is the sun, though without it you wouldn't be able to see anything. That also has a meaning.

This is where the previous post ended. Here I would like to add that for me this picture is a true image of Albion. For Albion is the white island and here we have both chalk cliffs and sea as well as a hint of the spiritual vastness to be encountered when one opens one's eyes to the vision of Albion and what lies beyond even that.

Posted by William Wildblood at 01:14