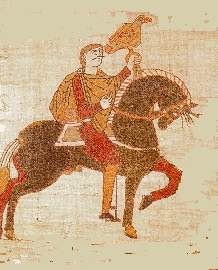 Today, October 14th 2016, is the nine hundredth and fiftieth anniversary of the Battle of Hastings. With a surname like Fitzgerald, I must have had an ancestor who fought on the Norman side that day, yet I've always felt a strong dislike for Duke William and a profound affinity for his opposite number, King Harold II, the last of the Anglo-Saxon kings.

As a boy, I read everything I could on this period of history and I remember how affected I was by the English defeat at Hastings and the death of Harold. The only other episode in my reading which upset me as much was the slaying of Hector by Achilles (with a little help from Athene) in the Iliad, another example of outrageous injustice and misfortune.

To say that Harold was unlucky in his short reign from January to October 1066 would be an understatement. He did as much, if not more, as Winston Churchill did in 1940 to maintain his country's independence, yet the dice didn't fall his way and he had no allies overseas to distract, pressurise and push back the enemy. On September 25th, Harold crushed an enormous Viking army at Stamford Bridge near York in one of the most spectacular military triumphs of the Medieval era. Three days later, Duke William landed on the South coast. Harold could, and maybe should, have bided his time in York, resting his troops and gathering reinforcements. He couldn't bear, however, to remain in the North when the Normans were ravaging his own Earldom of Wessex. Such was his confidence in his men and his leadership that he raced hotfoot down to Senlac Hill and faced the invader with a footsore army at about half its optimal strength. Even so, the Saxons dictated terms for the first three hours of battle, until over-excitement led some of the soldiery to chase the struggling Normans down the hill, fatally compromising the defensive solidity which was central to Harold's strategy.

Harold has also suffered from the artistically sublime but politically biased Bayeux Tapestry. This famous picture of Harold swearing a solemn oath ... 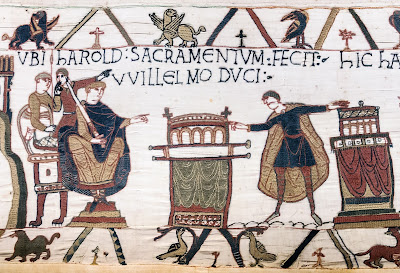 ... that he would allow William to assume the throne on the death of the childless Edward the Confessor (1042 - 1066) creates a very slanted impression of what most likely happened. The precise reasons why Harold found himself shipwrecked off the coast of Normandy in 1064 remain obscure. But he was rescued by William's men and stayed in the Duchy for a number of months as a guest (or prisoner, a cynic might claim) of the Duke. Harold's vow was almost certainly made under some kind of duress. It is barely conceivable, considering the circumstances, that it could have been a freely given decision. History, sometimes, is indeed written by the winners.

When Edward died on January 5th, Harold - despite being the son of an Earl (Godwin) rather than a King - was clearly the only man capable of inheriting the Crown and preserving the integrity of the country. During the second half of Edward's reign he had shown himself to be a first class leader (especially in his campaigns against the Welsh) and a highly competent administrator. He had the character and personal attributes, once the threat of invasion was quelled, to become one of the great English Kings, in the lineage of Alfred, Athelstan and Edgar. But it didn't happen for him, through no fault of his own, and Norman propaganda has done its best ever since to airbrush him out of history.

Harold, in this respect, could be viewed as England's 'missing' King, the Grand Monarque the country never had. Certainly, in my view, Harold II is the great play that Shakespeare never wrote. For a long time after the Norman Conquest, stories and legends circulated that Harold hadn't died at Hastings, that he was hiding, biding his time before returning at the head of a mighty host to beat off the oppressor. Harold plays his part and finds his place, therefore, in our nation's great Arthurian tapestry.

I have always felt as well, in a way which I can't quantify but which I feel to be vitally and existentially true, that Harold's death - even though it took place on the battlefield and not on the executioner's scaffold - in some way prefigures and foreshadows the terrible stain of Regicide, spreading across Europe, from our own Royal Martyr, Charles I, in 1649, to Louis XVI in 1793 and Tsar Nicholas II and his family in 1918. On this note, it is worth mentioning here that Fr. Andrew Phillips of St John's Orthodox Church, Colchester, will be celebrating a memorial service for King Harold and all his companions at the Church of St Mary Magdalene, Whatlington, East Sussex, on Thursday October 27th at 11 am. Further details here -

There is certainly a belief in some quarters that Harold was the last Orthodox King of England, the victim of a stitch-up between William and the Pope to impose the Roman rite once and for all on the country and banish the remaining elements of Celtic Christianity. How true this is I cannot say, but what is interesting is that Harold's daughter, Gytha, later married a prince of Smolensk named Vladimir Monomakh, who later became ruler and Grand Prince of a united Kievan Rus, a vast realm, stretching from the Baltic Sea in the North to the Black Sea in the South. They named their son, Harald, after his maternal grandfather, so there is a connection with the Orthodox world here and something of a happy ending too in that Harold's name and achievements lived on and took flourishing root overseas.

Harold's is a legacy, a story and a mythology, which can, and should, be tapped into today, here in his native realm. Those who voted 'Leave' in the June referendum, for instance, could do a lot worse, to my mind, than look to Harold as a symbol and exemplar of what fighting for independence really means and what it potentially costs. It is a spiritual aspiration, first and foremost, with absolutely no guarantee of worldly success, a thriving economy or material prosperity. You might even be forgotten. Airbrushed out of history. Traduced in a contemporary rehash of the Bayeux Tapestry. It is a risk and a leap of faith, but if you do it for the right reasons and in the right way - nothing to do with markets and trade deals, but everything to do with passion, heart and soul - then the people who matter - the poor, the weak, the humble, the little children who Christ welcomed into his arms - will cherish and bless your memory, until the wheel spins round and you come again -  in Russia, France, England and everywhere else - Arthur, Harold, Charles, Louis, Nicholas - the Once and Future King.

Posted by John Fitzgerald at 15:14

Very interesting piece, John, and I'm with you on the fact that leaving the EU is much more a matter of spiritual integrity than material prosperity. The two may or may not go together but we know which is the more important.