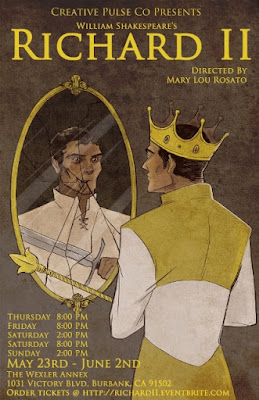 Richard II (1597) is not an action-packed play. It is spoken entirely in verse and has a still, reflective quality which renders it more akin - to my mind at least - to a stained glass window in a Medieval cathedral than the narrative cut and thrust of a conventional stage production. Like the window, Richard II is a heraldic work of art - emblematic rather than dramatic, a portrayal rather than an exposition. That is not to say, of course, that there is no story. There is. King Richard II is deposed by his cousin, Henry Bolingbroke, and subsequently murdered in captivity by a noble trying (and failing) to win the new king's approval. But the story is of secondary importance. It is what we are shown along the way and what Shakespeare asks us to reflect on that counts.

He shows us England in 1399, a homogenous, hierarchically-ordered Catholic kingdom, whose only overseas commitments lie in the neighbouring realms of France and Ireland. King Richard rules and reigns as God's regent. He has every confidence that the sacred chrism of kingship will shield him from Bolingbroke's insurgency:

Not all the water in the rough rude sea
Can wash the balm off from an anointed king.
The breath of worldly men cannot depose
The deputy elected by the Lord.
For every man that Bolingbroke hath pressed
To lift shrewd steel against our golden crown,
God for his Richard hath in heavenly pay
A glorious angel. Then if angels fight,
Weak men must fall; for heaven still guards the right. (III.2)

What Richard neglects, however, is his side of the deal. He fails to act as a king should, as a steward of the land. Richard is no blood-soaked tyrant à la Macbeth. On the contrary, he cuts a charming and cultivated figure. Nonetheless, he surrounds himself with flatterers, spends extravagantly and levies provocatively high taxes. Most damagingly of all, at the death of John of Gaunt, Bolingbroke's father, Richard seizes the properties and monies of both father and son, inviting thereby Bolingbroke's return from exile and encouraging the English nobility to rally to his standard.

Richard is deposed and subsequently slain. Bolingbroke is crowned King Henry IV. Yet it is a hollow crown he wears. Though a capable and respected ruler, Henry knows deep down he is a usurper and that it was Richard, for all his extravagance, who was God's anointed sovereign. Guilt weighs on him:

Lords, I protest, my soul is full of woe
That blood should sprinkle me to make me grow.
Come mourn with me for what I do lament,
And put on sullen black incontinent.
I'll make a voyage to the Holy Land
To wash this blood off from my guilty hand. (V.2)

It presses on his son, Henry V, as well, who, in the famous play of that name offers this prayer of reparation on the eve of the battle of Agincourt:

O not today, think upon the fault
My father made in compassing the crown!
I Richard's body have interrèd new,
And on it have bestowed more contrite tears
Than it issued forcèd drops of blood.
Five hundred poor I have in yearly pay,
Who twice a day their withered hands hold up
Toward heaven, to pardon blood: and I have built
Two chantries wear the sad and solemn priests
Still sing for Richard's soul. (IV.1)

Richard's deposition and death prefigure the fate of Charles I in 1649, another monarch with a knack of making enemies who relied overmuch on his divine right to rule. Charles, unlike Richard, was succeeded not by a usurper king but by no king at all. Oliver Cromwell ruled as Lord Protector for a decade and when the monarchy was eventually restored, in the person of Charles's son, Charles II, it was with its powers severely curtailed. Charles's martyrdom foreshadows in turn the executions of Louis XVI of France and Nicholas II of Russia (along with his family) in 1793 and 1918 respectively. Aggressive, totalitarian regimes assumed control in both countries, a significant step down from Cromwell's principled, if austere, autocracy, which in itself represented a decline from the ousting of Richard, who was at least replaced by a fellow sovereign in Henry IV.

All this shows that the real aim in killing a king is to kill God. Everywhere, in all times and places, when the natural pattern and harmony is disturbed, civil strife and bloodletting follow. The Bishop of Carlisle's prophecy, in Richard II, of the Wars of the Roses (and by extension the violence of the Reformation and the English Civil War) rings true throughout the ages:

The blood of English shall manure the ground,
And future ages groan for this foul act.
Peace shall go to sleep with Turks and infidels,
And in this seat of peace tumultuous wars
Shall kin with kin, and kind with kind, confound. (IV.1)

Any spiritual revival in his land will go hand in hand, I feel, with a renewed appreciation of the monarch as a sign and symbol of God's covenant with the country. The archetype of the king or queen runs deeply in hearts and minds. The huge crowds lining the streets of Leicester (Britain's most multicultural city, it should be noted) for the reburial of Richard III in 2015 bear potent witness to this. 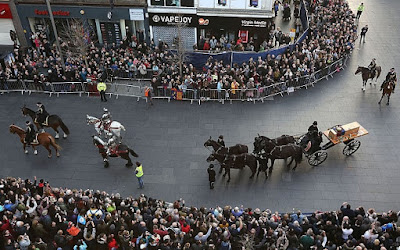 The potential for national renewal already exists therefore. I also believe that the presence of Prince Charles on the national stage offers further hope and encouragement for a spiritual, cultural and political renaissance.

Charles is a controversial figure. Like Richard II and Charles I before him he appears adept at losing friends and alienating allies, though in the Prince's case this has been due more to personal failings than political miscalculation. Despite this, he takes his role and responsibilities with high seriousness and displays an acute appreciation of what is required from a steward of the land. In a January 1993 letter to Tom Shebbeare, then director of the Prince's Trust (quoted on pages 493-494 of Jonathan Dimbleby's biography), Charles declares:

'For the past 15 years I have been entirely motivated by a desperate desire to put the “Great” back into Great Britain. Everything I have tried to do—all the projects, speeches, schemes, etc.—have been with this end in mind. And none of it has worked, as you can see too obviously! In order to put the “Great” back I have always felt it was vital to bring people together, and I began to realise that the one advantage my position has over anyone else’s is that I can act as a catalyst to help produce a better and more balanced response to various problems.

I have no “political” agenda—only a desire to see people achieve their potential; to be decently housed in a decent, civilised environment that respects the cultural and vernacular character of the nation; to see this country’s real talents (especially inventiveness and engineering skills) put to best use in the best interests of the country and the world (at present they are being disgracefully wasted through lack of co-ordination and strategic thinking); to retain and value the infrastructure and cultural integrity of rural communities (where they still exist) because of the vital role they play in the very framework of the nation and the care and management of the countryside; to value and nurture the highest standards of military integrity and professionalism, as displayed by our armed forces, because of the role they play as an insurance scheme in case of disaster; and to value and retain our uniquely special broadcasting standards which are renowned throughout the world.

The final point is that I want to roll back some of the more ludicrous frontiers of the '60s in terms of education, architecture, art, music, and literature, not to mention agriculture! Having read this through, no wonder they want to destroy me, or get rid of me …'

In his eulogy for the poet and founder of the Temenos Academy, Kathleen Raine (1908-2003), Charles goes one step further and reveals a deep understanding of the spiritual essence of what Raine called the 'Great Battle', the sacred task of waking Albion from materialistic sleep:

'I would hazard a guess within these hallowed walls that for all of us here Kathleen was, in essence, a kindred spirit whose brightly burning personality drew us, like moths, to her irresistible flame. We will remember her for the way in which she was cast in the mould of her master, William Blake; to the extent that she did her utmost to re-awaken an Albion 'sunk in a deadly sleep' and to remind us that what Blake 'wished to bring about was nothing less than a reversal of the premisses of materialism; not that people should be a little more "spiritual" and a little more "imaginative", but that we should understand that the cosmos is not a mechanism, but a living, sacred universe and that "Everything that lives is holy."'

A flawed vessel without a doubt. Like all of us. But the prospect of an individual capable of such thoughts ascending to the throne should surely bring good cheer to all of us engaged in the holy (and uphill) task of rousing Albion from sleep. 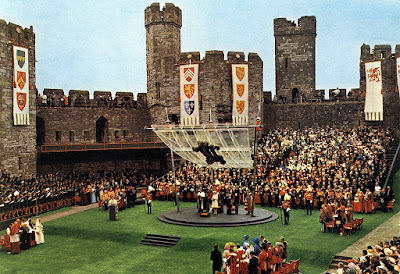 Posted by John Fitzgerald at 15:31

John - I personally do not expect Charles to be a good King - his choice of friends and associates seems to indicate deep character flaws.

I am thinking particularly of Jimmy Savile; who ranks as one of the most successfully evil persons in British history. Yet it surely took only an ordinary level of good sense and discernment (one look at the eyes) to detect the evil in that man; and yet he was given a powerful and trusted role in Charles's household, life and marriage.

My suspicion is that this is best explained by Charles's involvement with Savile's sinister activities as a 'fixer' for the socio-political-media elite.

At any rate, the apparent failure to repent fully and explicitly would seem to indicate this.

And if the eyes weren't enough of a red flag there was Savile's retaining of the flash-in-the-pan hair and clothing styles of an early 1970s non-u debauchee uglily into old age, well after his coevals grew up and most, though regrettably not all, cast these things aside and consigned the photographic evidence to bottom drawers or now-musty albums.