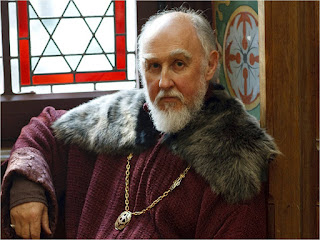 Geoffrey of Monmouth's History of the King's of Britain - published (in Latin) in the middle 1100s - is surely one of the greatest books of Albion: certainly none can match its influence, since this is the single main source of the stories of both Arthur and Merlin (although not the best source about Merlin - since Geoffrey later provided us with his much-fuller Life of Merlin).

In his introduction, Geoffrey tells us that his book is based on three main sources: Gildas, Bede and a book written in the Welsh-like tongue of the Ancient Britons.

Whilst occupied on many and various studies, I happened to light upon the History of the Kings of Britain, and wondered that in the account which Gildas and Bede, their elegant treatises, had given of them, I found nothing said of those kings who lived here before the Incarnation of Christ, nor of Arthur, and many others who succeeded after the Incarnation; though their actions both deserved immortal fame, and were also celebrated by many people in a pleasant manner and by heart, as if they had been written. Whilst I was intent upon these and such like thoughts, Walter, archdeacon of Oxford, a man of great eloquence, and learned in foreign histories, offered me a very ancient book in the British tongue, which, in a continued regular story and elegant style, related the actions of them all, from Brutus the first king of the Britons, down to Cadwallader the son of Cadwallo. At his request, therefore, though I had not made fine language my study, by collecting florid expressions from other authors, yet contented with my own homely style, I undertook the translation of that book into Latin.

This book is now unknown - and this introduction, and its implicit influence on the text of Kings of Britain, is our only direct knowledge of it (although serious and imaginative scholars including Flinders Petrie have suggested its identity).

It is entirely typical of the worst aspects of 'modern scholarship' that the academic 'consensus' has been that this lost book did not exist; but was instead either invented entirely, or else was used to represent some other less-prestiguious sources:

Geoffrey claims in his dedication that the book is a translation of an "ancient book in the British language that told in orderly fashion the deeds of all the kings of Britain", given to him by Walter, Archdeacon of Oxford. Modern historians have dismissed this claim. It is, however, likely that the Archdeacon furnished Geoffrey with some materials in the Welsh language that helped inspire his work, as Geoffrey's position and acquaintance with the Archdeacon would not have afforded him the luxury of fabricating such a claim outright.

Yet, as with the modern scholarly consensus that the grave of Arthur and Guinevere found by the monks of Glastonbury Abbey in 1191 was dishonestly fabricated as a money-making fraud, this rejection of Geoffrey's account of a lost history in Ancient British is based wholly on cynical prejudice. I see no reason to doubt Geoffrey; and would therefore regard Geoffrey's History as a genuine example of history - rather than 'a literary work of national myth'.

And since it is our only source for much of the early history of the island of Albion, we should regard this source seriously and with respect - trying, as best we may, to understand and recover in our own hearts the spirit with which History of British Kings was written.

It was, after all, accepted as an essentially-true account of history for many centuries, up to and including Holinshead's chronicles used by Shakespeare more than four hundred years later.

I would therefore recommend Geoffrey of Monmouth to all true Albionites as worthy of most care-full reading!

I find it peculiar in the extreme that the question of whether it was an ancient book or a collection of disparate sources he compiled should be considered a matter of any import at all. Surely the previous book would itself have to have been itself compiled from disparate sources at some point, in order to have authenticity to history that spanned different generations.

All true histories that are not direct revelations from God have to be based on sources that originate at disparate times and places before being ordered and set into a single account. To say that the book Geoffrey translated didn't really exist is no more reasonable than to claim that Geoffrey was likewise a fiction created by a later author to sell the Latin text created by some other author.

@CCL - Yes, the rejection of the lost book is evidence of an ulterior motive - a kind of ritual gesture of being 'hard-nosed' - materialist, reductionist.

I discovered yesterday that the poet (and scholar) Milton regarded Geoffrey's latin prose as of such high quality that it was too good for the Middle Ages, and therefore must have been a survival from classical Rome.

While this inference was mistaken, it demonstrates that the beauty of writing of The Kings of Britain was likely a factor in its great popularity, and why the books survived in dozens of manuscripts.